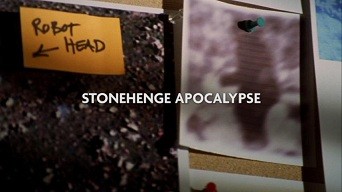 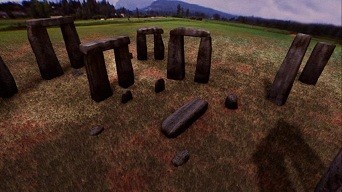 I've done many reviews of SyFy Channel original movies repurposed for home video by the likes of distributors such as Lionsgate, Anchor Bay, Image, Vivendi / Genius Entertainment, etc. for DVD Talk. I'm beginning to think that just writing "another SyFy Channel original movie has made it to home video" can pretty much sum things up in a review. It's truly remarkable how the cable channel consistently churns out low-budget creature features and end-of-the-world scenarios for its weekend programming - and how viewers consistently show up for them. The formula clearly works. To be fair, most of the films I've seen from the channel aren't terrible per se, but they're predictably silly and forgettable.

Anchor Bay is the culprit this time. Recently, they unveiled yet another entry in this seemingly endless stream of cheesy B-style movies: a 2012 knockoff with the cool title Stonehenge Apocalypse. This one falls squarely in the end-of-the-world category; sorry, folks, but no mega-piranhas or crocosaurs lurk in this one.

Instead, Stonehenge Apocalypse offers up a parade of (truly) laughable special effects work matched only by its nonsensical plot and odd characters. I actually liked this SyFy offering - not enough to recommend it per se, but I did like it.

The movie follows Jacob (Misha Collins, perhaps best known for a recurring role in the cult television series Supernatural), a disgraced scientist who now lackadaisically hosts a radio call-in show on conspiracy theories. He's actually a genius, of course, as movie logic dictates - and his genius is reluctantly called upon by a group of scientists studying Stonehenge (comically recreated with CGI) after the stone columns suddenly rotate and fry a bunch of unfortunate tourists with electricity. It seems that Stonehenge is actually part of an old terraforming device that includes the pyramids of Egypt and other ancient monuments - and this device has been retriggered, meaning the Earth is doomed in less than 48 hours unless Jacob and his tagalong scientist friend Kaycee (Torri Higginson from Stargate: Atlantis) can stop it.

Yes, there's actually a countdown clock in this movie just to heighten the dramatic tension. Ahem.

What follows is an onslaught of fake-looking CG volcanoes (the nadir - or the highlight - of the visuals, depending upon your point of view, are the faux fireballs that blow through CG-rendered landscapes in this flick every time an ancient monument is "triggered"), scenes of scientists staring in wonder and/or horror, lengthy technobabble about electromagnetism, military attempts to "blow up" Stonehenge, and a maniacal cult prepping for the Eden to occur after the doomsday. Believe it or not, the film even throws in a couple of hokey gunfights for good measure.

All I can say is that as ridiculous as this movie is (and this is ridiculous even by SyFy Channel standards), the screenplay, credited to Brad Abraham and director Paul Ziller, keeps things going at a steady clip. Boring is not an adjective I'd use for this film, in other words. Abetting the goings-on is the campy acting by the cast, especially an over-the-top performance by Hill Harper (CSI: New York) as Jacob's former colleague. Even the score by Michael Neilson is in overdrive here, suggesting each scene is potent with tense suspense through its continual dunh-dunh-dunh-ing.

As I suggested at the start of this review, Stonehenge Apocalypse fits the SyFy Channel template of unconvincingly-rendered CG destruction to a tee. If you're a fan of this sort of thing, it delivers and is worth a look. All others can safely skip it. 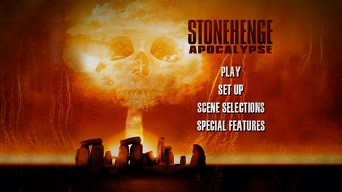 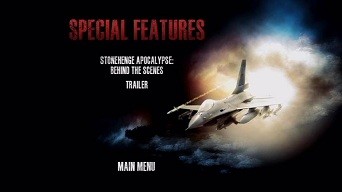 Anchor Bay gives Stonehenge Apocalypse an anamorphic widescreen presentation in a 1.78:1 aspect ratio. The image quality is quite good, with strong colors and sharp detail - too bad the effects work is shoddy.

The sole audio track is an English language Dolby Digital 5.1 affair. The mix is serviceable with dialogue and the score well-represented. Optional subtitles are available in Spanish and English for the Dear & Hearing Impaired.

Trailers for The Shortcut and The New Daughter precede the main menu. They're not accessible via the menu system, but a Special Features sub-menu does have a trailer for Stonehenge Apocalypse.

Additionally, STONEHENGE APOCALYPSE: Behind the Scenes (30:05) offers soundbyte comments from cast and crew that summarize the plot, provide behind the scenes information, and "sell" the movie; in other words, it's a standard promotional featurette, though perhaps at bit longer than usual.

The coolest thing Stonehenge Apocalypse has going for it is its title. Otherwise, it's another standard entry in the SyFy Channel original movie library. As such, it's only suggested for fans of unconvincingly-rendered CG mayhem in service of an absurd concept.