Kino // Unrated // March 22, 2011
List Price: $34.95 [Buy now and save at Amazon]
Review by Stuart Galbraith IV | posted March 12, 2011 | E-mail the Author
Our Hospitality (1923) firmly established silent clown Buster Keaton's talent as a filmmaker, part of that new triumvirate that included Charlie Chaplin and Harold Lloyd. Keaton's first feature, The Saphead (1920) was largely the creation of others and subverted his established screen persona, while the amusing Three Ages (1923), though directed and co-written by Keaton, hedged its bets with Intolerance-like multiple storylines.

Our Hospitality, on the other hand, has all the hallmarks of Buster Keaton in his prime. The film is as lavishly produced as a big-budget drama; set in the early-19th century, its recreation of the period is unusually authentic; and like many of Keaton's best films, there's a fascination with and comic set pieces built around antiquated machines. The train at this film's center anticipates Keaton's later masterpiece, The General (1926).

Kino's Blu-ray release, in 1080i format, lacks the revelatory, pristine quality of that film, but it's nevertheless a big improvement over their earlier DVD release, and it includes two musical accompaniment options, a short subject, photo galleries, a documentary, and an entirely different cut of the film, transferred to 16mm from a badly decomposed nitrate source. It's preceded by a useful introduction that surmises that this mysterious version (called, simply, Hospitality) was an actual work print used by Keaton, who may have used it to perfect the film's dramatic scenes prior to shooting and re-shooting major comedy scenes later on. 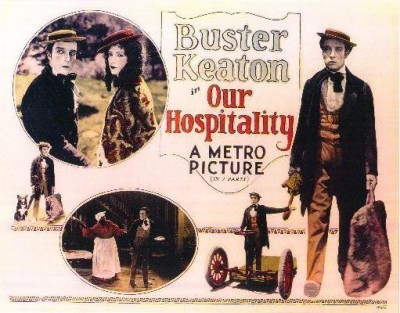 The story is suggested by the Hatfield-McCoy feud of the late-19th century, though Our Hospitality opens with a prologue set in 1810, and the rest of the picture takes place in 1830.

On a stormy night in 1810, William McKay becomes the latest victim of his family's long-running feud with the Canfields. His widow sends one-year-old Willie (James Keaton, billed as Buster Keaton, Jr.; he died in 2007) to New York to live with his aunt. Twenty years later, Willie (now Buster Keaton, Sr.) returns to his hometown to claim the family estate, which he imagines to be a Southern-style mansion. (In an amusing gag, when the estate is revealed as little more than a run-down shack, the mansion Keaton had been imagining explodes.)

En route he meets and falls for Virginia (Natalie Talmadge, who had married Keaton for real in 1921). They travel aboard a Stephenson's Rocket, one of the earliest locomotives, and in this, this film's best sequence, one hilarious gag follows another.

Virginia invites Willie over for dinner, she unaware that he's a McKay and he unaware that she's a Canfield. Virginia lives with her father (Joe Roberts) and two brothers (Ralph Bushman and Craig Ward), all of whom tower over Willie and are eager to kill him at the earliest opportunity. However, tradition forbids them from murdering Willie while he's a guest in their home, but as soon as he leaves: BAM!

Our Hospitality is one of those near-perfect comedies that works wonderfully from beginning to end, in this case partly because of Keaton's insistence on a believable dramatic framework and because his fascination with early-19th century trains, bicycles and the like is infectious. There are also some very funny gags early on, an amused nostalgia for a bygone age when Manhattan was still mostly farmland and when a few horse-drawn carriages within 20 feet of each other amounted to a traffic jam. ("This is getting to be a dangerous crossin'!" someone remarks.)

Many of the gags involving the Stephenson's Rocket work on a similar level, with the conductor literally pushing the track a few feet to avoid an immobile mule, or the old coot who throws stones at the locomotive so that the engineer will lob free firewood in his direction.

The climax features Willie and Virginia being washed down some dangerous rapids - Keaton almost drowned for real, in footage retained for the film - and there's a spectacular rescue on a studio-built waterfall that still dazzles audiences today.

Presented in its original 1.33:1 format with tinting throughout (mostly sepia, with blue tinting for the nighttime exteriors), Our Hospitality doesn't have that like-it-was-shot-yesterday quality of City Girl, The General, and a few other silent movies already out on Blu-ray, but when compared with Kino's earlier DVD version it's still a big improvement. The presentation defaults to an orchestral score by Carl Davis (long associated with Kevin Brownlow's silent cinema documentaries) in DTS-HD Master Audio 5.1 and 2.0 stereo. It's lovely but others may prefer the alternate one in 2.0 stereo by Donald Hunsberger. Yet another score by Lee Erwin, on pipe organ, accompanies the alternate cut included as an extra feature.

The supplements, all also in 1080i, include the aforementioned alternate cut (see above), which is badly deteriorated but interesting. Viewers are recommended to at least watch the fascinating explanatory introduction that precedes it. The Iron Mule (1925) is a Fatty Arbuckle-directed short featuring the train from Our Hospitality and stars Al. St. John, with Keaton in the uncredited role of an Indian. Historians Patricia Eliot Tobias and David B. Pearson provide a 30-minute documentary about the making of the film, much of it covering the same ground as in Kevin Brownlow's landmark Buster Keaton: A Hard Act to Follow. Photo galleries feature a nice collection of images.

One of the best silent comedies, Our Hospitality is heartily recommended for all ages. A DVD Talk Collector Series title.