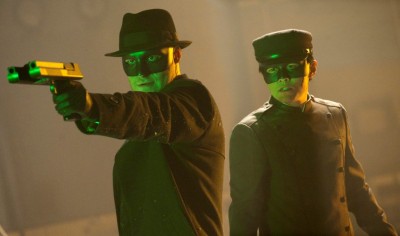 "The Green Hornet" is a beloved superhero franchise that has carried on triumphantly through the years on radio, television, and the silver screen. For its latest cinematic adaptation, the material confronts its greatest challenge: Seth Rogen. The giggly, goofy actor takes an implausible leap into big screen heroics; however, his "Green Hornet" is far from a stone-faced urban savior with a thirst for justice. Here, Rogen plays the masked avenger as a boob, though a financially powerful, easily impressed boob. His instincts to turn the role into comedy serve him well, making his "Green Hornet" a screwy addition to the parade of stern superhero releases.

Raised with constant dismissal from his father, newspaper magnate James Reid (Tom Wilkinson), Britt (Seth Rogen) has grown up to be a lazy, spoiled brat, incapable of getting his life in order. When James is killed by a bee sting, Britt is devastated, inheriting a newspaper he doesn't know how to run. Finding comfort in a particularly skilled associate named Kato (Jay Chou), Britt is swiftly emboldened when a simple act of accidental valor is pulled off by the duo. Branding himself the Green Hornet, Britt takes to the superhero game armed with Kato's inventions and protected by Kato's martial art skills, with special assistance from Lenore (Cameron Diaz), a secretary with a background in criminal investigation. Out on the streets, the pair look to bust up baddies, quickly disturbing oversensitive kingpin Chudnofsky (Christoph Waltz, playing campy notes with ease), who's not eager to hand Los Angeles over to the amateur crime fighters. 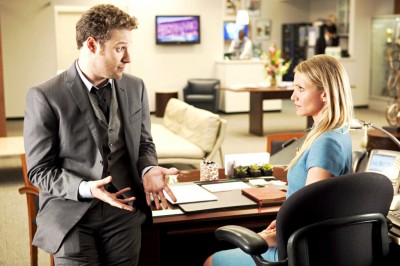 "Green Hornet" is an odd production all around, with directorial duties handed to French filmmaker Michel Gondry, known more for his abstract absurdity ("Eternal Sunshine of the Spotless Mind") than his way with big-budget anarchy. The choice is unconventional, yet Gondry's oomph is primarily why the feature remains in a curiously palatable state, showcasing the filmmaker taking a few left turns with this established property, shifting Britt Reid's fight for justice into a spirited slapstick comedy, tap dancing somewhere between satire and crooked homage.

A visual ace, Gondry at least beautifies the "Green Hornet" universe with phenomenal gadgets and costumes, keeping the film fluid with comic book touches such as "Kato-Vision" (the not-so-sidekick's ability to assess danger instantaneously) and Chudnofsky's double-barreled handgun, while enjoying his time racing around with Black Beauty, the gang's heavily tricked-out car -- their bulletproof tank that plays records, sprays bullets, and shoots missiles. Gondry loves the toys, energetically detailing the little hero machines Kato constructs, with one device, a gun that shoots green knockout gas, providing a humorous running gag for the film as Kato looks to keep Britt out of trouble by arming him with a foolproof weapon of incapacitation. When "Green Hornet" stays in the comfort zone of its origin tale, watching the opposites team up without much of a crime-bustin' game plan, the picture provides an ample verve that balances the comedy and the violence admirably, tinkering with Gondryesque special effects and PG-13 roughhousing (much of it involving testicle trauma) to satisfying results. Locked in a bubble of cheeky adventuring, the picture feels confident and remains incredibly entertaining.

Squeezing 110 minutes out of the material (scripted by Rogen and Evan Goldberg), proves to be a real challenge for everyone involved, with a threadbare story involving corrupt politicians and Britt's developing journalistic integrity suddenly assuming great importance in the final act. A sluggish film to begin with (Gondry's incapable of manufacturing a steady pace), "Green Hornet" doesn't do itself any favors by taking matters seriously, with the increased concentration destroying a few critical gags, including Chudnofsky's urge to be feared as a villain, renaming himself "Bloodnofsky." My goodness, that joke just dies onscreen, largely because of its placement in the middle of the script's sober stage. For a film that primarily chases laughs, it seems ridiculous to waste a good chunk of time attempting to tie an uninspired story together. 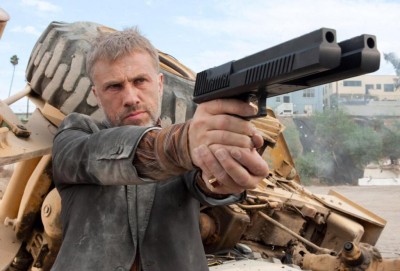 "Green Hornet" is most assured with Britt and Kato, exploring the tentative bond that grows into brotherhood. They delight in their triumphs, compete for Lenore's affections, and when they argue, the Reid compound is trashed beyond recognition. Granted, Rogen isn't stepping too far away from his established stoner persona, playing Britt as an arrogant, bewildered guy with a bright idea he's completely incapable of pulling off alone, despite his compulsion to assume credit. Chou's the real find, making Kato an attentive superman, stylishly saving the day with his moves and machines. Chou's English is rough but he has charisma to spare, with Gondry delighting in his fractured attempts to keep up with Rogen's rapid-fire wit.

"The Green Hornet" is scattershot but amusing, stuffed with enough idiosyncrasy and visual creativity to keep it trucking along when the story gums up the works. Purists may end up in tears over this comedy, but those seeking a lighthearted romp (handed a gratuitous 3D conversion) with some wicked smashmouth theatrics might welcome this superhero change of pace.