Image // R // May 17, 2011
List Price: $17.97 [Buy now and save at Amazon]
Review by Stuart Galbraith IV | posted May 26, 2011 | E-mail the Author
Jagged Edge (1985) is an okay courtroom melodrama/neo-noir thriller that's interesting to look back upon all these years later. It was made at a time when such films were so rare they had become a novelty, though movies like Body Heat (1981), The Verdict (1982), and Against All Odds (1984) gave their genres a boost. Today, of course, such stories are all over TV in shows like Law & Order: SVU, the collected works of writer-producer David E. Kelley, and Damages (2007-present), a popular series that, like Jagged Edge, stars actress Glenn Close as an emotionally conflicted attorney.

She plays a very different sort of lawyer in this, however, and her character's occasional stupidity is one of the film's failings. It was a popular success in 1985 but today seems rather ordinary and dated if well made - its cleverness has since been trumped by more solidly constructed screen- and teleplays. The film hinges on a kind of gimmick that's hard to discuss without giving it away. I'll avoid doing that, but if you've not seen the picture and want to, then you might want to come back to this review after you've seen it.

A Columbia Pictures title sublicensed to Image Entertainment, this no-frills release nonetheless looks fantastic. Razor sharp with strong if limited audio, it looks and sounds far better than it did in most movie theaters 26 years ago, when grainy, muddy prints more closely resembled the film's trailer, which is this Blu-ray's only extra feature. 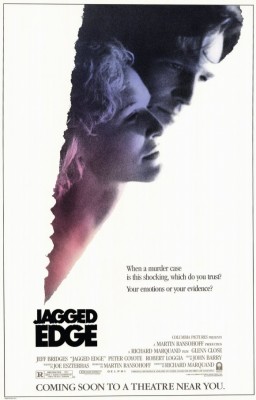 (Mild Spoilers) The film opens with the brutal nighttime murder of a wealthy socialite, Paige Forrester, by a masked intruder who stabs and mutilates her body, writing the word "bitch" with her blood on the wall above her bed's headboard. From the outset, District Attorney Thomas Kransy (Peter Coyote) suspects her husband, Jack Forrester (Jeff Bridges), the editor of the San Francisco newspaper her family owns, and who stands to inherit her fortune.

The firm representing Jack's interests persuade a reluctant "Teddy" Barnes (Close) to defend him, this despite her long absence from criminal cases as an Assistant D.A. under Kransy. A divorcee with two children, she helped her onetime boss bury evidence that would have exonerated a convicted murderer who later hanged himself. Struggling with the guilt ever since, Teddy flatly refuses to represent Jack unless she's convinced he's innocent. He gradually persuades her of his innocence, while she quickly (and unbelievably) falls in love with him.

The movie hinges on its "Did he or didn't he?" mystery that's not answered until the very end, and Teddy's conflicted emotions about becoming involved with a) a client who b) might also have murdered his wife. The way it's all resolved was fairly novel at the time, though not without precedent. The Big Reveal, the moment when the wife's murderer is finally and definitively identified, unintentionally left many in the audience confused. This is because the awkward camera angle in which the murderer's face is shown makes his identity less than clear, and also because back in the mid-1980s especially theaters owners dialed back the amount of light their movie projectors would throw on movie screens, making this already dark scene even darker, a problem Roger Ebert discusses here.

And, speaking of, Ebert along with his late, lamented rival across the aisle, Gene Siskel, were at the time besieged with queries from moviegoers hopelessly confused by the ending, and on their TV show went so far as to (if memory serves) broadcast the scene in question just a few weeks after the movie opened in order to clarify things.

Jagged Edge was directed by Richard (Return of the Jedi) Marquand, but its auteur, so to speak, was definitely Marquand's friend, wildly successful screenwriter Joe Eszterhas. He started well with F.I.S.T. (1978) and proved his commercial mettle with Flashdance (1983) and Basic Instinct (1992) but flopped badly with several mid-1990s films, most notoriously Showgirls (1995). Jagged Edge may be his best screenplay, despite more than its share of holes.

The biggest problem is Teddy's attraction to Jack, which is inconsistently sexually driven some of the time while, elsewhere, is dominantly an emotional attraction, Teddy's way of filling an emotional black hole left by her divorce. The movie offers no real explanation for her infatuation with Jack, other than they both like horses (and, specifically, horseback riding-as-foreplay). There's a misogynistic thread in Eszterhas's scripts, particularly after he became top dog in his field, and here Teddy, with that male name of hers, is an emotionally fragile woman in above her head in a decidedly man's world. She foolishly lets her emotions - or, as her alcoholic leg man, Sam Ransom (Robert Loggia) implies, her vagina - get in the way of her good judgment. She compounds a tragedy, and for a second time. (There's the vaguest hint Teddy complied with Krasny's cover-up because she was involved with her boss at that time.)

Loggia is terrific in what was a kind of comeback film for the actor, this despite the fact that Eszterhas relies on four-letter words to elicit laughs from the character, a cheap device not necessary because of Loggia's fine performance. The film also provided the great character actor John Dehner with a prominent late-career movie role as the judge, one of several he had around this time. (He also was fine as Henry Luce in The Right Stuff.)

John Barry wrote the sparse but effective score, that pounces like a cat during suspenseful moments (aided by good use of a Steadicam unit), and which is about the only time the Dolby Stereo audio really springs to life.

It's not exactly Avatar, but I found Jagged Edge extremely impressive in maximizing its video transfer. The image is very crisp with visible but texturally pleasing film grain. For a mid-'80s 1.85:1 release, this is very good indeed. The original Dolby Stereo audio has been remixed for 5.1 DTS-HD Master Audio but as stated above is limited and only the rare bursts of John Barry's heavy-on-synthesizer scoring made me sit up and take notice. The only Extra Features is a trailer, also in high definition.

I thought Jagged Edge was just okay when it was new and that's still my assessment 26 years later. I was glad to see it again and for its performances, Barry's score, and for a few other reasons worth a look. Recommended.