Car 54, Where Are You? - The Complete First Season

Car 54, Where Are You? (1961-63), creator-writer Nat Hiken's hilarious follow-up to his phenomenally successful The Phil Silvers Show/Sgt. Bilko (1955-59), didn't get a whole lot of attention or respect when it was new. In recent years though, this wonderfully loopy, ahead-of-its-time sitcom, about a pair of misfit police officers working in the Bronx, has slowly but surely attracted a well-deserved cult following. (Its brief revival on Nick at Nite during 1987-90 certainly helped.) Filmed on location in New York, and at Biograph Studios on E. 175th Street, also in the Bronx, with mostly New York-based talent in front of the camera, Car 54 is notable for several reasons.

For one thing, on a primetime schedule dominated by WASPish, white bread settings and characters, Car 54 was richly diverse, populated with Jewish, Irish, Italian, and African-American characters. The cops look like real cops, and their beats were neighborhoods that looked like real neighbors, not idealized backlot sets.

For another, the scripts were often wildly absurd, complex (if always broadly-played) farces - the kind of thing perfected by a later, more popular series also set (but not filmed) in New York: Seinfeld. Seinfeld's roots can be traced back to this series and the equally absurd though more Burlesque-rooted The Abbott & Costello Show (1952-54), but the line from Sgt. Bilko to Car 54 to Barney Miller to Seinfeld (by way of The Munsters) is clear.

The series has been licensed to Shanachie Entertainment, and they've done a pretty good job bringing the series to home video, despite a few minor problems. Car 54, Where Are You? - The Complete First Season includes all 30 episodes, a few with sponsor spots intact, in decent transfers. Also included is a funny and charming extra feature: Bronx native Robert Klein interviews cast members Charlotte Rae and Hank Garrett. 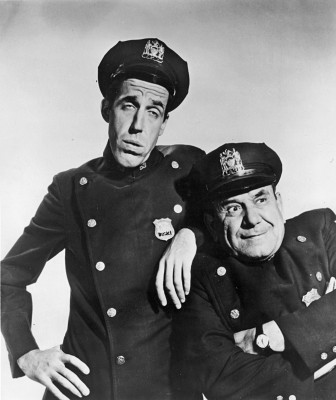 The series starred Fred Gwynne and Joe E. Ross. Gwynne memorably appeared in an early Sgt. Bilko as a depressed soldier shamelessly exploited by Phil Silvers's conniving motor pool sergeant, while Ross was a semi-regular on the series as mess sergeant Rupert Ritzik.

The latter casting was ironic, as Ross was infamous as a world-class slob who wore at least as much food as he ate. (As Maxwell Smart might have told Ross, "Be careful, you're getting some in your mouth.") Ross was a profane, immensely unfunny comedian outside Nat Hiken's realm*; but as dim-witted Officer Gunther Toody, Ross was pure gold. Partly this was because the viewer quickly picked up on the fact that Ross wasn't a whole lot brighter than the character he was playing, much like Maurice Gosfield's Private Doberman on Bilko: unvarnished comedy in all its disheveled, tuna-stained glory.

Ross's catch phrases "Ooh! Ooh!" and "Do you mind? Do - You - Mind?" became the talk of the playground and eventually part of the pop culture lexicon. Excitable but stupid, with his coarse, ruddy features (including big ears that wobbled when he spoke) and stocky physique, he perfectly contrasted lanky, horse-faced Gwynne, who played Officer Francis Muldoon, Gunther's straight-man. Mutt and Jeff as cops.

But Car 54 was really an ensemble show. Paul Reed, who died in 2007 at the ripe old age of 97, was a good Paul Ford-type as their boss, Captain Block, while Hank Garrett, Bruce Kirby, Al Lewis, Nipsey Russell, Frederick O'Neal, and Ossie Davis turn up regularly as other officers at the 53rd Precinct. Also in the cast was Beatrice Pons, a delight as Gunther's long-suffering wife, Lucille; Charlotte Rae as Al Lewis's hotheaded wife, Sylvia; and Yiddish theater veteran Molly Picon as Mrs Bronson.

The scripts, many written or co-written by Hiken, are often ingenious. In "What Happened to Thursday?" for instance, Gunther wants to help Officer Schnauzer (Al Lewis), who for some reason always gets into a screaming match with wife Sylvia (Charlotte Rae) every Thursday night, and always over the most inane things imaginable:


Leo: "James Polk was a GREAT president! You know what the trouble with you is? You still got that stupid schoolgirl crush on Thomas Jefferson because of his powdered wig. Well let me tell you something: Thomas Jefferson used snuff!"

Gunther's plan is simple: make Leo believe that Thursday is actually Friday, thus breaking the curse. Unfortunately Gunther's deception gets out of hand when everyone at the precinct thinks it really is Friday, throwing everything into Y2K-like pandemonium.

In another show, "Who's for Swordfish?" Gunther and Francis want the day off to take advantage of a rare chance to do some deep-sea fishing, but as with "What Happened to Thursday" their attempts to switch shifts with other officers result is utter chaos at the station, with the duty roster marked up like a plate of spaghetti. 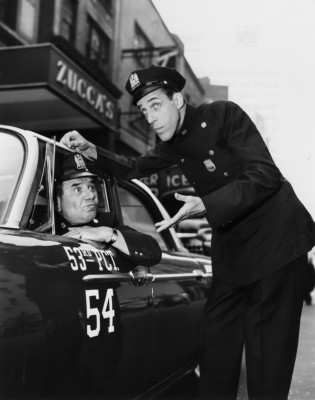 The 30 episodes, presented in their original black & white, full-frame format over four discs, look good despite being derived from less than perfect 35mm film elements. Generally though they're a pleasure to watch and don't appear edited or time-compressed, and a few have their original sponsor spots. The all-region discs feature adequate English mono audio (no subtitles or alternate audio options).

In a truly bizarre move, rather than present the shows in broadcast or production order, someone at Shanachie thought it'd be fun to present them in order of popularity, though how this was determined is anyone's guess. Unfortunately, this makes finding specific episodes a problem and tracing the evolution of the show is almost impossible. (Al Lewis, for instance, turns up as a construction worker in one episode, after already playing Schnauzer in shows filmed later on.) I also dislike the packaging, with DVDs hard to remove from their plastic hubs, and with episode lists hidden behind the DVDs, meaning you'll need to remove at least two discs from the packaging just to find one of those out-of-order shows.

There's just one extra but it's a good one: Robert Klein's affectionate, intelligent interview with Hank Garrett and Charlotte Rae. It's funny, anecdote-filled and revealing, despite Rae's obvious reluctance to speak ill of Ross. Fans of the series should love this.

A situation comedy milestone, Car 54, Where Are You? belongs right there alongside The Honeymooners, Bilko, I Love Lucy, and The Dick Van Dyke Show on your DVD shelf, and despite a few minor problems it's a DVD Talk Collector Series title.

* Be sure to check out this superb, jaw-dropping profile of Ross.