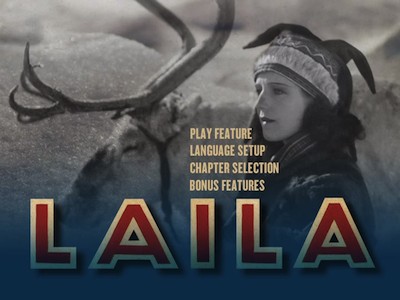 Laila is a 1929 silent film for Norway, notable as a writing/directorial effort by George Schnéevoigt, who had been Dreyer's cinematographer, and for its lavish scope. Set in the northern wilderness, Schnéevoigt and his cameraman Allan Lynge capture beautiful images of the snow-covered landscape, documenting the breadth of the Norwegian countryside. It's a film that is awesome to behold, even if the story doesn't quite match the grandeur of the locale.

Based on a novel by Jens Andreas Friis and set in the late-19th century (contemporary to the book's publication), Laila is the story of a girl born to God-fearing Norwegian merchants but who ends up being raised by a Sami reindeer herdsman. At the start of the picture, baby Laila is lost on the way to her christening, and she is found by the roughneck cowboy of the frozen tundra, Jåmpa (Tryggve Larssen), who is out hunting wolves that are threatening to devour the deer belonging to his boss, Aslag Laagje (Peter Malberg). Jåmpa takes the infant to his childless master, and the family accepts the girl as their own. A year later, however, when Aslag discovers how Laila came to be stranded, he returns her to her distraught mother, only to have the plague send the child back to the Sami for good.

Jump ahead 19 years, and Laila is now a grown woman. Played by Mona Mårtenson, Laila is a carefree girl who has enjoyed a good life with her wealthy family. Despite an ethnic divide and ongoing prejudice between the Norwegians and the Sami (who, as befitting the time, are referred to as Lapps in the movie), Laila may have actually moved up in the world. Her adopted father gifts her a beautiful white reindeer named Stormwind, the finest creature anyone has seen. Laila is happy riding her pet around in the snow, and she is blissfully unaware of her beginnings.

Things change on a visit to market when Laila meets Anders and Inger (Harald Schwenzen and Alice O'Fredericks) and immediately strikes up a friendship with them. Little do any of them know that the magnetism drawing them together is a bond of blood. Anders and Inger are Laila's cousins. She and the handsome merchant's son fall for each other, a romance that causes grumbling both because of the racial schism but also because Laila is supposed to marry Aslag's other foster child, Mellet (Henry Gleditsch), that coming winter. The girl is drawn one way by genetics, but duty pushes her to go another.

Laila is an epic melodrama, one that has a history befitting the long treks the nomadic Sami people regularly took across the ice-covered mountains of their home country. The movie languished for many years until a massive restoration undertaken in the 1970s pieced it back together. This new DVD was taken from a 2006 digital restoration, which has preserved the beautiful photography and ambitious filmmaking for all to see. There are some truly impressive sequences in Laila, including the harrowing flight from wolves at the start of the picture or the heroine's dangerous kayak journey over a waterfall. The landscape is as much of a character as any of the people who inhabit it, and the harsh conditions of pre-20th century life and the dramatic seasonal changes are breathtaking. Laila's cinematography is, in a word, astonishing.

The story, on the other hand, is not nearly as impressive. Laila isn't a bad movie; on the contrary, it's really a very good one. The problem is that it's a fairly predictable soap opera, and I'd wager it was as predictable in 1929 as it is now. The trajectory of Laila's problems is pretty easy to see once she falls for Anders, right down to the last-minute revelations and rescues. It also doesn't help that Laila is kind of an annoying character. She's immature and selfish and Mona Mårtenson overacts the part, her performance bordering on the cliché parody most laymen envision when they think of silent-film acting. You're likely to find yourself wishing that the film would focus on some of the other characters, like badass frontiersman Jåmpa and his Jack London-esque adventures. The action sequences--which include a race where the riders are dragged on their sleds by charging reindeers and a climactic battle where Jåmpa literally fistfights with a pack of wolves--are ridiculously exciting, whereas the love story is kind of a bore.

These relatively minor misgivings about the plot shouldn't dissuade anyone from seeing Laila. Fans of silent films or students of early international cinema will find much to please them here. It's an impressive effort from George Schnéevoigt, a filmmaker whose importance in developing European film style should not be discounted. Laila's familiarity can also be as much of an upside as a downside. The well-worn narrative lacks any fussiness and hits all the right marks, and so it keeps the film moving at an enticing pace. The journey may be recognizable, but that doesn't mean it's not worth going there. 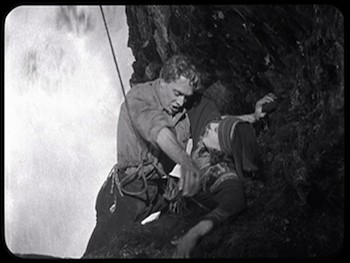 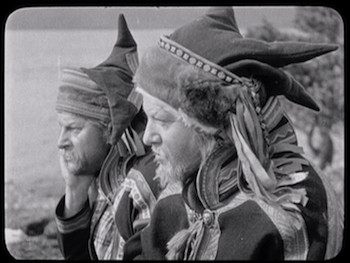 Video:
Flicker Alley has done a solid job bringing Laila to DVD. The full frame 1.37:1 transfer is mostly pretty good. The transfer shows the flaws of the original print, including scratches, misframes, and some focus issues, but the underlying image quality is fairly excellent. I noticed some interlacing and combing issues, but nothing that was too distracting. Given the age of the film, it's a pretty impressive rescue job overall. (Note: The "picture boxing" effect visible in my screengrabs is not at all obvious on a widescreen TV.)

Sound:
Robert Israel has put together a new piano-centered musical score for this edition of Laila, basing the orchestration on the music of Norwegian composer Edvard Hagerup Grieg, who is best known for "In the Hall of the Mountain King." The music is unobtrusive, subtly enhancing the viewing experience, but never overstating itself or taking over the proceedings.

The title cards look to be recreations of the original Norwegian, and they are given a new subtitle translation for this DVD. You can choose subtitles in English, French, or Spanish.

Extras:
An extensively illustrated 20-page booklet comes with the disc. It features a new essay by written by Casper Tyberg, detailing the history of the film and an explanation of some of its cultural representations; a diary from the set by the actor who played Jåmpa; and notes from Robert Israel about Grieg and the music.

The disc itself features three galleries: one for original promotional materials, another showcasing a fantastic collection of photos from the production, and finally a collection of biographies on cast and crew.

FINAL THOUGHTS:
Recommended. Laila is an impressive artifact from the days of silent cinema. Made in 1929, the Norwegian picture is a somewhat predictable melodrama about one girl's romantic travails and the split between her adopted family and the group of people she originally came from; however, it also has thrilling action sequences and superlative cinematography, showcasing the majestic frozen tundras of Northern Europe. Fans of the silent era will appreciate seeing this rare example of burgeoning international cinema, and anyone who appreciates the art of motion picture making will find something to suit their fancy in Laila. 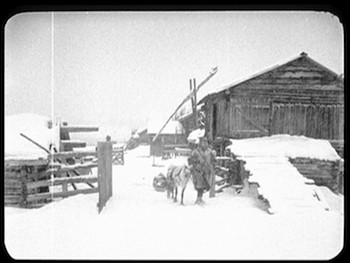 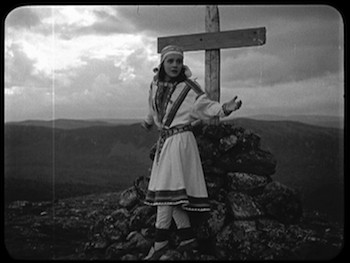