BBC Worldwide // Unrated // April 26, 2011
List Price: $34.98 [Buy now and save at Amazon]
Review by Stuart Galbraith IV | posted May 20, 2011 | E-mail the Author
In a word, wonderful. Reviving Upstairs, Downstairs, the 1970-75 British drama that all but defined the early days of PBS in America, was an undeniably canny decision in this franchise-driven entertainment world we now all live in, but would it be any good? Would its creative team retain the British class system-in-microcosm core that drove its stories and made them relevant (sadly more so in 2011 than 1971) or would it merely regurgitate characters and themes done better before, drowning them in high-concept glossiness?

A three-part series of one-hour episodes, Upstairs Downstairs (minus the comma for the new series) is indeed lavish and sumptuous, especially when compared to the original series, which like other BBC dramas of the era was shot on tape and staged on wobbly sets - all technically prehistoric by today's standards. Jean Marsh, whose parlormaid character Rose Buck connects the old series to the new, is in some behind-the-scenes footage included as an extra feature visibly awed by the movie-quality upgrade of the set design. If the old Upstairs, Downstairs resembled a videotaped play, the new series is like a meticulously researched, well-appointed movie.

And while the new show certainly plays as much like a resurrection as a continuation - the new butler is a lot like the old one, the new cook is a lot like the old cook - the dozen or so characters are so rich and full of possibility and the actors playing them so utterly perfect that it hardly matters. And, true to form, the series has social relevance as well, drawing on British history and social/class issues that add weight as well as contributing to its enormously satisfying emotional impact.

Filmed in high-definition, the series is presented on two single-sided DVD-9s with a combined running time of 180 minutes, not including the 35-minute behind-the-scenes featurette that's on disc two. 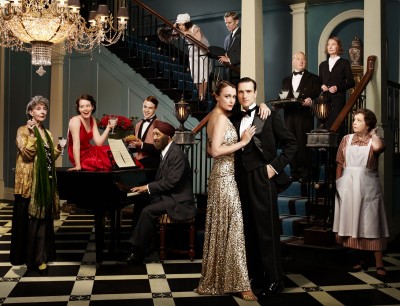 Both the original and new series take place at 165 Eaton Place, in London's tony Belgravia, in central London. The original series contrasted the lives of its owners, the wealthy Bellamy family (who lived "upstairs"), with their household staff, whose base of operations was located in the building's basement (thus, "downstairs"). The five-season-long original program followed these characters across several decades, from 1903-1930, when 165 Eaton Place was finally sold and the Bellamy survivors moved away.

(A forgivable inconsistency here is that while Rose has aged a mere six years the actress playing her has aged 35 years. Marsh is 76 and now looks her age though ironically the actress was incredibly well-preserved for decades, and until just recently might just have passed for a woman in her late-40s.)

Lady Agnes initially plans on managing the staff herself but soon realizes she's way over her head and by the end of the first episode persuades Rose to return to Eaton Place as its housekeeper. Meanwhile, Sir Hallam's eccentric mother, Maud, Lady Holland (Eileen Atkins, who co-created the original Upstairs, Downstairs with Marsh), after spending many years in British India, returns unannounced and promptly moves in uninvited, accompanied by her male secretary, Amanjit Singh (Art Malik), and an overindulged pet monkey.

Much of this series follows Lady Agnes's tempestuous but unformed and naïve younger sister, Lady Persephone Towyn (Claire Foy), who begins clandestine, illicit relationship with driver Harry, who turns her on to Oswald Mosley and his British Union of Fascists. Later, she sets her sights higher flirting with Joachim von Ribbentrop (Edward Baker-Duly), the German ambassador to Great Britain.

Meanwhile, Harry's involvement with the Black Shirts upsets the newest arrival downstairs, Rachel Perlmutter (Helen Bradbury), a German-Jewish refugee who had been an upper middle-class university lecturer until her husband was arrested and she was forced to flee the country, eventually seeking work in London as an upstairs parlourmaid.

Although its since been renewed (a six-part second series has been announced for 2012), at the time it looked like this three-parter might be it and so the show's writers pack an awful lot of drama and history into just 180 minutes. But its three-act structure has other advantages, notably clear story arcs with a beginning, middle, and end. There's an interesting bird motif in all three episodes: appropriately, "The Fledging," "The Ladybird," and "The Cuckoo," and the intertwining and paralleling of the upstairs and downstairs worlds is consistently interesting, while the balance of drama and comedy (mostly the of-manners variety) feels just right.

Particularly satisfying is how the issue of children plays out: Lady Agnes yearns for a baby after years of disappointments and miscarriages yet feels threatened by an orphaned child taken in by her husband. Meanwhile, the childhood death of Sir Hallam's beloved sister and its impact on his relationship with both his mother and his wife takes an unexpected turn near the end that has a big emotional payoff.

It's also indescribably touching to see actress Marsh return to the series after 35 years (a record for series television?), and her reactions and mixed emotions about revisiting Eaton Place - in scenes generally expressed without any dialog - are moving and unforgettable.

That, perhaps, isn't so surprising, but that the rest of the characters would be equally interesting is, and this short series hints at the kind of marvelous character vignettes to come. Among the ensemble cast, Atkins, Reid, Scarborough, Malick, and Kendrick are particularly good. All expand upon the richness already in the teleplays.

Released in 16:9 enhanced widescreen, Upstairs Downstairs is a treat visually and aurally. The show looks and sounds excellent, and it's especially nice to hear full-bodied orchestrations by composer Daniel Pemberton that incorporate Alexander Faris's original theme. (The wall-to-wall music too frequently telegraphs emotions but is otherwise excellent.) The Dolby Digital audio is fine and English SDH subtitles are included.

The only supplement is a good one, Upstairs Downstairs - Behind Closed Doors, a BBC-produced behind-the-scenes documentary featuring interviews with most of the cast and key creative staff. It's well done and entertaining.

One of 2011's best TV releases, this is a must-see even if you've not seen the original program. A DVD Talk Collector Series title.