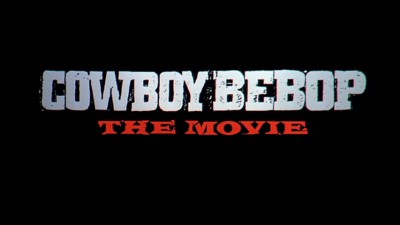 Cowboy Bebop is one of the most impressive and meaningful anime series ever made. Each and every episode managed to feel like a mini-movie in the best of ways -- with carefully delivered stories which brought a certain flavor to the entire series. This was a show that felt original and unique. It had an intelligent story arc, compelling characters, energetic direction, and incredible music. There was an inner beauty to the entire production that shined radiantly and abundantly. All of these important elements had a major impact on the series becoming a genuine classic in anime history. Cowboy Bebop will likely always hold a place as one of the best creations of the entire art form and that is no small feat.  Cowboy Bebop is probably the coolest anime series ever made.

Cowboy Bebop: The Movie (also known as Knockin' on Heaven's Door) had a huge level of enthusiasm and anticipating surrounding it prior to release. Yet it also had to live up to those expectations as best as it could. The film takes place within the timetables of the original 26 episode show and was designed to please series fans and newcomers alike. Could it live up to all the hype? Apparently, it actually could!

The film begins by introducing audiences to the lead characters and establishing the world they live in: The setting is out in space (Mars to be exact) and the time is year 2071. Spike Spiegel seems to be the leader of the entire crew. He is seemingly carefree but is somehow a deeply complex man at the same time. The Bebop is the ship used by Spike and his group of bounty hunter space cowboy's. The Bebop is used to fly across space and search for bad-guys to stop. Yet the group is also in the process of trying to earn a living (so that they can actually afford some food... at the very least). Things become truly complicated for everyone when a deadly virus spreads and the man who unleashed it will become the man the Bebop crew must defeat before it's too late for everyone. 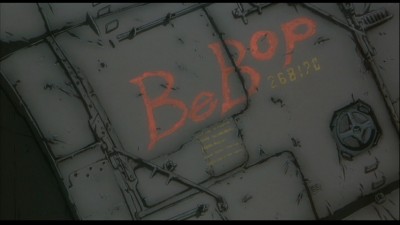 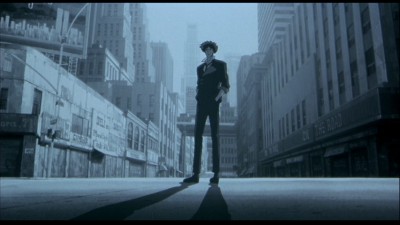 The characters are a huge reason why the film is so enjoyable. Spike is one of the coolest characters in anime with dark-green afro hair and a mysterious personality that is explored even further in this film. Jet remains a tough but sympathetic guy, someone who is easily relatable to. Faye is a definite badass and she can definitely hold her own in this oddball crew. Edward (known mostly as Ed) is hilarious as the comic relief -- a total goofball that somehow also manages to have a genius IQ. A few new characters pop up in the film as well and help to establish the significance of the film's story (even as it steps outside the realm of the series in some ways).

The animation doesn't disappoint. The scale of the production has increased over the series and it really seems as though every element came together in the film for a visual feast. The character designs are just as great as they were in the series, but in some ways the show is topped in the scenery department by having the scale be even grander. The art remains a huge element of the series unique style and appeal in the feature-film transition. 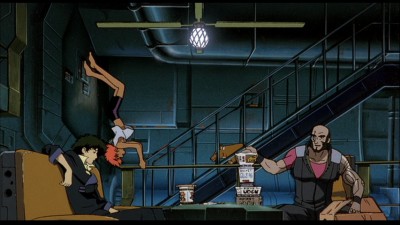 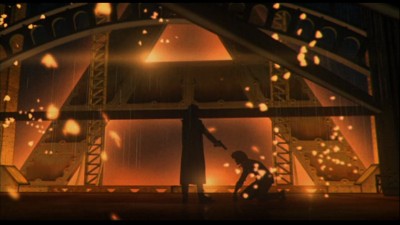 Shinichiro Watanabe is undeniably one of the most gifted film-makers in the entire world. He is not simply a visionary for the anime art form but someone who has already proved himself a master of his craft and who can bring a great appreciation to his chosen art form. The substance of the screenplay by Keiko Nobumoto (Tokyo Godfathers) is also quite strong even if Watanabe remains the most crucial key player.

The music is no laughing matter though. Yoko Kanno is highly regarded by anime fans as one of the greatest composers of all time. This is no mere exaggeration. Kanno is a genius who understands music far better than most and she manages to craft tracks that are jazzy, exciting, and melodic all at the same time. The film would be quite different without such an incredible soundtrack.  Kanno constantly elevates the material with her music.

Ultimately, Cowboy Bebop: The Movie remains one of the most thrilling and essential films in anime because of the remarkable talents who joined forces to craft something memorable and engaging for the series fans.  The movie is a nice love letter to the characters, everyone responsible for bringing Cowboy Bebop together, and to the fans who have continued to cherish the series and movie as a landmark accomplishment in the medium. What a joy! 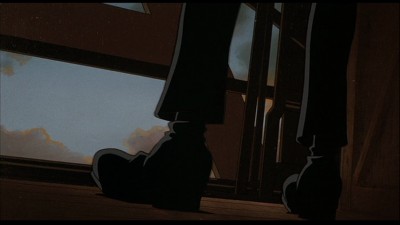 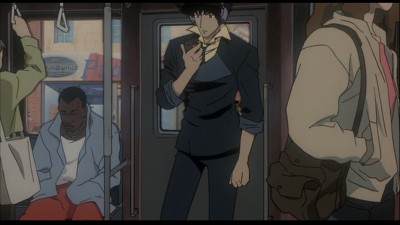 Cowboy Bebop: The Movie is presented on Blu-ray with a impressive looking 1:85:1 transfer that retains the original theatrical aspect ratio. The first thing noticeable about this transfer is that it is leaps and bounds better than the DVD release. Anyone who has seen the film before hasn't seen it looking anywhere near as detailed and beautiful as it looks on Blu-ray. The colors are better defined, the minor grain structure is retained, and the sharpness has a decent boost (even if some random shots still seem a bit blurry from time to time). The look of the film is properly retained. The most surprising thing about the transfer might be how cleaned up the source appears to be. The DVD was marred with dirt and scratches that are now mostly gone with this genuinely beautiful HD PQ.

The images featured in this review are from the DVD release and do not represent the High Definition Blu-ray picture quality.

This is a bit surprising and disappointing. The film does receive lossless audio - though not an entirely stellar presentation, the dynamics are reasonably engaging and impressive for a Blu-ray release. The only issue is that the film is presented in 2.0 Uncompressed PCM. That wouldn't necessarily be an issue if a surround sound mix didn't exist. The DVD release does contain 5.1 audio though and for both the English and Japanese dubs. What happened? It could be a licensing issue of some sort (theoretically) but with other Image Entertainment Blu-ray's facing similar issues it might not be that at all. Both English and Japanese dubs are included here (and both are excellent dubs, for the record). Optional subtitles are provided in Spanish, English, and for the deaf-and hard of hearing.

Unfortunately, there are no extras on this release. Owners of the DVD release will want to hold on to that earlier edition of the film for the bonus materials. I suggest switching this Blu-ray release in to a two-disc case that can hold both discs. Newcomers might not want to purchase both editions as the extras were enjoyable but not necessarily substantial though. 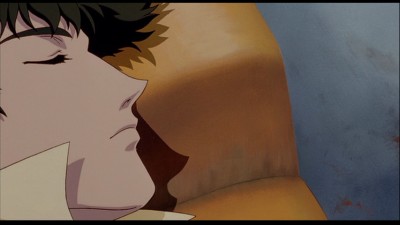 Cowboy Bebop: The Movie is a rare example of near-perfection in adapting the formula of a TV series into the feature-length format. The film manages to be incredibly entertaining and it tells an exciting story that should appeal to newcomers and fans of the original series. The film itself is very easy to recommend. The Blu-ray release has strong video (much improved over the DVD release), but the lack of surround sound (which was available on the DVD) is a major disappointment that can't be entirely overlooked. There are also no extras on this release. I'd still consider the dramatically better PQ a good enough reason to make this an essential purchase for Cowboy Bebop fans. Highly Recommended.