Full disclosure, "The Learning Tree" for me is a holy grail DVD release. Ever since the launch of the format and the introduction of the commentary track, I hoped Warner would sit writer/director/composer Gordon Parks down to share his thoughts on this milestone in filmmaking. However as they did with the releases of his better-known films, "Shaft" and "Shaft's Big Score," "The Learning Tree" received no love, remaining missing-in-action until now. Thankfully, even though Mr. Parks passed away a few years back, Warner has finally decided to release the film under their burn-on-demand Warner Archives program, perhaps in response to renewed interest in another forgotten Parks film, "The Super Cops," which has also been slated for a remaster and Archives release following director Edgar Wright's screening of a rare theatrical print of it early this year. All that said, revisiting "The Learning Tree" nearly two decades after I last saw it on an old worn out VHS was a moment of excitement and trepidation.


Based on Parks' novel of the same name, "The Learning Tree" holds a special place in film history for being the first major studio feature length film directed by an African American director. Parks recalls in his autobiography, "Voice in the Mirror" that it was John Cassavettes who upon reading the original novel urged parks to adapt the film for the big screen and helped Parks, already an established and well-respected photojournalist for LIFE magazine, secure a deal with MGM. Parks never one to back down from a challenge, with the help of an un-credited William Conrad producing, wrote the script, shot the film, and composed the musical score. The result is not a great film, but an amazingly technically competent piece of filmmaking and even more astonishing knowing it came from a first time director. 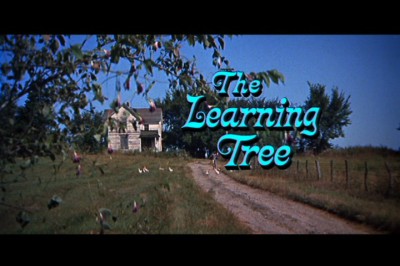 While Parks is likely remembered solely for helping popularize the blacksploitation craze with "Shaft" two years later, "The Learning Tree" remains an uneven but heartfelt portrayal of black characters as, pardon my clumsy wording, regular people. It's rather well known how blacks were portrayed in film of the past and although now "The Learning Tree" will strike viewers as pedestrian and raise the question, "what's all the fuss about," but in 1969 Parks' treatment of black characters going about their lives encountering common problems as well as those of race and racism was a revelation. The film follows Newt Winger (Kyle Johnson) a young man growing up in 1920s Kansas as well as those close to him in the community. For those familiar with Parks' own life, many of the events and challenges faced by Newt (and others) are drawn directly from Parks' own life experiences (for instance later in the film Marcus gets a job sweeping up at a local brothel, a direct mirror of Parks' own teenage experience), adding a rich layer of personality and heart to a sometimes stilted film.


When the camera isn't focused on Newt's story, viewers are given a glimpse into the life of Marcus Savage (Alex Clarke), an antagonistic force in Newt's life who lacks the stability and love of family that Newt is blessed with. Booker, Marcus' father is a drunk and rabble-rouser, feeding Marcus' lack of responsibility for his own actions, allowing Marcus to use the unfair abuse by the hand of Kirky, the local racist sheriff, played with a creepy calm by Dana Elcar and the guards at the juvenile detention facility Marcus winds up in. Parks doesn't shy away from the racist attitude of Kirky and we definitely feel for Marcus' plight, but with Newt as a thematic foil, we see Parks making subtle statement that racism is not a crutch for bad behavior. Later in the film, Newt encounters racism of his own, in the form of a set-in-her ways bigoted teacher; rather than react with violence or threats, Newt lashes out bluntly and shares his feelings. The ensuing trip to the principal's office is a tense moment, as Parks handles issues of white guilt and the fact that some people just won't change, with fine nobility. It's not a perfect scene by any means, with Parks' dialogue like so much of the film, very deliberate with little deeper meaning under the surface, but for the time, it's obvious Parks wanted to get his views across clearly: blaming an entire group for the racist actions of a small few is as narrow minded and foolish as the racist spewing his venom at a race for the actions he finds displeasing in one person. 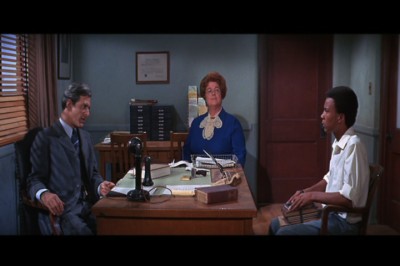 While Parks' screenplay is more than adequate, the performance from lead Johnson is lacking at times. Johnson often feels like a deer in the headlights, focusing more on his delivery and looking stiff, making Parks' words seem more contrived than they actually are. Fortunately, Parks writes the character as sympathetic and likeable so we can forgive the poor performance slightly, but not entirely. Clarke however, quickly overcomes his stiffness, and towards the end of the film is a fascinating character to watch, stirring emotions of both frustration and heartbreak in viewers. The supporting cast all do their jobs well, breathing life into the small town and helping to flesh out Parks' portrayal of normal life; there are some racists, but there are also a lot of genuinely kind and caring people, including one who ends up in a situation putting Newt at the most thematic crossroads of the movie that will also have severe consequences on Marcus' life.


Parks' direction is excellent, letting the characters tell the story, using his skills a photographer to great effect, capturing the emotion of the people, while also easily adapting to more active filming in terms of exterior shots and landscapes. His debut score is pleasant, but nothing remarkable, while the whole film as a package feels a bit more sweeping than the 107-minute time limit might let on. As a devoted Parks fan (I won't hesitate to list him as one of my big inspirations in life), "The Learning Tree" was a very satisfying experience, but one that I'm not afraid to admit is not a bonafide masterpiece in filmmaking. Nothing can deny it's place in history, but the sometimes overly simple script and Johnson's limited skills as an actor bring it down a few pegs. It's still a good film, but one that viewers need to understand the context of, otherwise it will feel, undeservingly clichéd and dated. 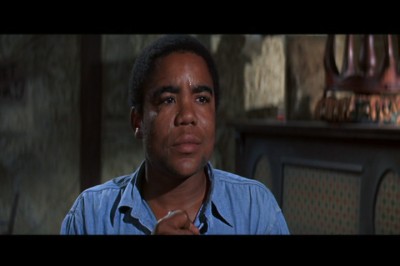 
The 2.40:1 anamorphic widescreen transfer is far better than one would expect for a 42 year old film released with no fanfare. Detail is average at best, however, colors are very striking, highlighting Parks' eye for pleasing visuals. Most pleasing though is the absence of major print damage and artifacts despite being interlaced. Once could only imagine how good the movie would look with a proper remaster.


The English mono soundtrack is perfectly serviceable, with dialogue taking up the majority of the soundscape, while the effects and film's score are easily discernable with no issues involving distortion.

"The Learning Tree" is a good movie, but not a great one. Its importance is more as a piece of filmmaking history and a fantastic example of a relatively outstanding directorial debut. For those looking for a film that tackles historical racism and the coming-of-age in a non-pandering format, "The Learning Tree" is bound to please. It makes no excuses, treating everyone as equals as we should treat each other. A noble, earnest effort, from a very remarkable man. Highly Recommended.