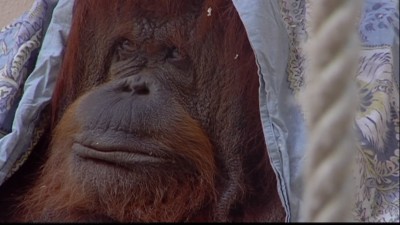 A succinct yet contemplative cinematic essay on the peculiar circumstance of animals in captivity, Nicolas Philibert's Nénette focuses on the titular ape--at 40, one of the oldest living orangutans--and her several companions, who are on living display among many other species at Le Ménagerie du Jardin des Plantes, a Parisian outdoor zoo. The film allows us an hour or so of close contact with Nénette and company, and it offers plenty of glimpses, typical for the animal-documentary subgenre, of their odd, charming behaviors and expressions. At the same time, Philibert uses his cinematic tools to shift the film away from standard adorable-animal fare, underlining the artificiality of a zoo resident's situation and the potential impossibility of our ever really knowing or understanding them under such conditions.

One of Philibert's most daring choices is to efface the human element, at least visually. We hear the offscreen voices of Nénette's keepers both former and current, as well as the various comments of zoo visitors, and we sometimes catch a glimpse of their reflection in the glass that stands between them and the orangutans; but never is a human being anything but peripheral to what we see. The visual dimension of the film consists almost exclusively of long takes, shot frontally through the glass from the medium-close POV of any everyday observer, of the orangutans--their interactions, their play, but mostly what appears to be their prevailing mood of stoic, tolerant ennui. The usually static shots are carefully, often beautifully framed and held for an unusually long duration; we do not have the option of wandering away to look at the next exotic animal, and thus are able to feel for ourselves both the still, peaceful quality of these creatures' lives (one of the peculiar attributes of orangutans, we learn, is that they severely limit their vocal expression, almost never making a sound) and the slowness of time when the only thing to look at from inside a cage is a parade of observers who come, satisfy their curiosity, and go. 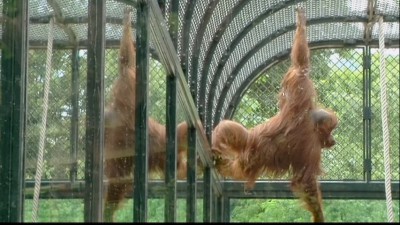 Philibert (whose best-known work is his deservedly well-regarded 1996 documentary on French schoolchildren, Etre et avoir (To Be and To Have)) does not fashion a story out of his footage as did, for example, Barbet Schroeder in his similarly ape-themed 1976 documentary Koko: A Talking Gorilla. Instead, he ingeniously uses the disjunction between what we see and what we hear to create a certain dramatic tension. Over the image of the utterly subdued, droopy-eyed Nénette and the others, we hear the excited, shrieking exclamations of children and their families, their guesses as to which orangutan is Nénette and which her son, Tubo. As Nénette, perched in an outdoor section of her cage, gazes at us calmly, we hear in the distance the chanting of striking workers and the declamations of social activists. This could suggest either that those who would ignore such matters are complacent apes or that orangutans have succeeded socially where humans still struggle; regardless of interpretation, it is the clash of sound and visual that intrigues, engages, and compels.

What we hear most consistently is the apparently instinctive anthropomorphizing of humans when faced with our non-human animal counterparts. A voice apparently belonging to a middle-aged woman conjectures that life for Nénette, in captivity with her son, must be terribly boring; what the orangutan needs, according to her, is a "husband." One of Nénette's keepers discusses her in psychological terms as a "star" who fell in love with the media spotlight afforded such relatively rare species as orangutans, and who now must accustom herself to the dwindling media attention granted an aging attraction. Another informs us that Nénette's facial expression, which on a human might imply a sad or troubled state of mind, means no such thing; nevertheless, he wonders whether we even have the capacity not to imagine the attributes of an animal in anything but such well-meaning but inaccurate human terms. Hearing these projections of recognizable human thoughts and feelings onto Nénette at the same time we're witnessing her brightly intelligent yet inscrutable eyes and endlessly patient demeanor suggests that there is both less and much more to the lives of our fellow creatures than this apparently unavoidable human approach allows us to see or comprehend.

In this way, Nénette, in Philibert's hands, ultimately becomes not so much a documentary subject as an enigmatic mirror, a perception that the director nicely reinforces with an impressive degree of cinematic finesse. In a turning of the tables that renders the film a unique and unexpectedly affecting experience, Philibert transforms our preoccupation with whatever entertaining or informative behaviors and characteristics Nénette and her ilk might display into a contemplation of our own behaviors and characteristics, and our propensity for projecting them onto beings whose actual concerns may very well lie elsewhere.


Kino presents Nénette anamorphically, in its theatrical aspect ratio of 1.85:1. The disc's reproduction of the feature, originally shot on digital video (a format that, at the level of its currently available technology, is well suited to home digital media), is superb. The images are crisp and clear throughout; the colors are bright and well-corrected, creating a very nice visual beauty and immediacy overall. Unlike the simultaneously dull-looking and garish videotape of yore or the early graininess and blur of DV, both film and transfer make a good case for the feasibility of digital video, both as practical for documentary filmmaking and as a format suitable for theatrical features.


Nénette is a film with no ostentatious sound whatsoever, but its aural properties are crucial to its effectiveness, and the Dolby 5.1 digital sound for this edition, with its crystal-clear and proportional capture of ambient sounds, background voices, and bits of up-front narration--creates a sonic atmosphere that feels remarkably close to that of standing in front of Nénette's habitat as a visitor to Le Ménage du Jardin des Plantes.


The rather typically misleading theatrical trailer is included (it makes the film looks a lot zanier and a lot less interesting than it is), as are a small selection of stills from the film. What pushes the extras into the well-worthwhile category is the abundance of additional content Kino has included. 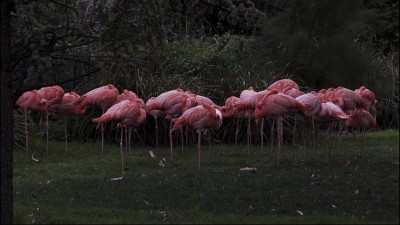 Night Falls on the Menagerie is an 11-minute short by director Nicolas Philibert that was made at the same time as Nénette. Here, Philibert vastly expands his presentation of the lives of the animals in Le Ménagerie du Jardin des Plantes; instead of a sustained look at one species, we have brief, successive glimpses of many--from otters to flamingoes--as they prepare to bed down in the evening, after the zoo has closed. If the feature is an essay, this short is a complementary poem. Compared to Nénette, it is perhaps more pretty than deep, but it makes a great chaser to the experience of the main film.

The most substantial extra is an additional disc containing an entire additional feature, Un Animal, Des Animaux (Animals and More Animals), Philibert's 1996 documentary on the preparations for the reopening, after a 35-year closure, of the Natural History Museum in Paris--basically a very large-scale taxidermy project involving animals and insects of every kind. This disc appears to be a prior release, from an earlier period of the DVD format, that Kino has repackaged along with the newer, similarly-themed Nénette; this would explain the grainy transfer of the 35 mm print, occasional pops in the sound, and 4:3/letterbox, non-anamorphic presentation. For these reasons (and because the film, lovely as it is, is slighter and more conventional than Nénette), including Animals and More Animals as a supplement rather than an additional primary disc was wise and respectful to the consumer, as what would have been a subpar stand-alone release makes for a generous supplement.


Less straightforwardly amusing and more thoughtful--even philosophical--than might be expected, Nénette is a gentle yet stylistically rigorous documentary glimpse at the complex relationship between animals in captivity and those who come to observe them (including those of us who are looking at them on screen). Director Nicolas Philiberti offers many immediate aesthetic pleasures while gently challenging us to reexamine the terms in which we understand and relate to non-Homo sapiens. It's a quietly profound experience, highly edifying, and Highly Recommended.