Other // Unrated // March 15, 2011 // Region 0
List Price: $39.98 [Buy now and save at Amazon]
Review by Stuart Galbraith IV | posted March 29, 2011 | E-mail the Author
As I've noted repeatedly in other reviews, one of the great things about the DVD format is that big and boutique labels alike, in presenting remastered titles for the first time in their uncut, original-language and widescreen formats, have introduced whole genres heretofore under-appreciated when not ignored entirely in America.

No country's genre films benefited more from the DVD revolution than Italy. (DVD gave Japanese yakuza and chanbara films a big boost, too, but its comedies, musicals, and innumerable melodramas are still awaiting rediscovery.) Before DVD, Italian movies shown in America were pretty much limited to the art house-type market of Fellini, Antonioni, Visconti, et. al., along with poorly presented Spaghetti Westerns and peplum (Hercules-type muscleman movies) on TV. But, thanks to DVD, whole new genres suddenly became available from which a multitude of cult films emerged: giallo (Italian thrillers), crime movies, sex comedies, war movies, and horror films (especially those directed by Mario Bava), while the Westerns and peplum were, thanks to excellent new video transfers and loads of extra features, also reappraised.

The four-film Fernando Di Leo Crime Collection is yet another extremely impressive release, this being one of the first of two U.S. offerings from Rome-based Raro Video (the other being Fellini's The Clowns). The four movies - Caliber 9 (Milano Calibro 9, 1972), The Italian Connection (La Mala Ordina, 1972), The Boss (Il Boss, also known as Wipeout!, 1973), and Rulers of the City (I Padroni della Citta, 1976) - are interesting and entertaining at worst, frequently rise above their genre parameters, and feature American character stars in plum, sometimes offbeat roles. The first three movies are 16:9 enhanced widescreen while Rulers of the City is 4:3 full-frame matted to 1.85:1 but still looks okay zoomed in on widescreen televisions. Each disc is crammed with long featurettes and there's a fat booklet, too. If all of Raro's releases are going to be this good, sign me up! 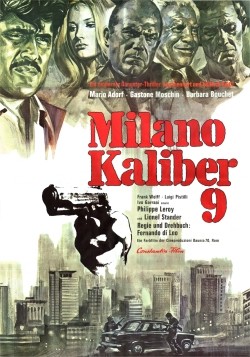 Like Italian filmmakers of his generation, Fernando Di Leo (1932-2003) was by all accounts an extremely intelligent, well-read and politically savvy writer-director, heavily influenced by Huston and Melville, aiming beyond the clearly defined commercial demands of genre filmmaking. He first made a name for himself working on the script for Sergio Leone's Fistful of Dollars (1964) and later as Leone's assistant on For a Few Dollars More (1965). He wrote numerous Spaghettis after that, including Navajo Joe (1966), concurrent with intermittent directorial assignments, including the horror movie Slaughter Hotel/The Beast Kills in Cold Blood (1971), starring Klaus Kinski. But it was his Euro-crime films, poliziotteschi in his native Italy, that earned him his lasting fame. The first three films in this set, with similar themes but no story or character connections, are collectively known as Di Leo's "Milieu Trilogy" while Rulers of the City, also known as Mr. Scarface, is his best-known, post-trilogy work.

With their American headliners, mouthed English throughout even in scenes featuring nothing but Italian natives, the movies were clearly made with the American market in mind and to some degree play up to the Italian stereotypes crystallized in The Godfather novel and films. Ironically, the "most Italian" of Italian stereotypes is played in the first two films by Mario Adorf, a Swiss-Italian actor known mainly for his German films (but also Major Dundee and Fedora).

The first film in the set, Caliber 9, stars Gastone Moschin (Seven Times Seven, Amici miei, The Godfather, Part II) as Ugo Piazza, a small-time hood newly released from prison, relentlessly hounded by the police and his former Mafia associates - all of whom believe he hid $300,000 in stolen money just prior to his arrest. Like Chamberlain Oishi in Chushingura, the crux of the drama is the suspense stretched across almost the entire length of the film: Did he or didn't he?

Bald, stone-faced Piazza makes a fascinating, unlikely antihero, a character soaking in mystery, who wears his years as a Mafia foot soldier on thick, leathery features and a permanent, world-weary scowl. He's inexpressive yet so hardened by a life of petty crime you think he could easily stroll through a brick wall. (If anyone was born to play Superman's arch-nemesis, Lex Luthor, it's Moschin.) Exotic beauty Barbara Bouchet (Star Trek's "By Any Other Name," Don't Torture a Duckling) is an eyeful as his girlfriend, while blacklisted Hollywood actor Lionel Stander appears as his American boss. However, it doesn't sound like Stander's voice in either the English or Italian versions. (**** out of *****) 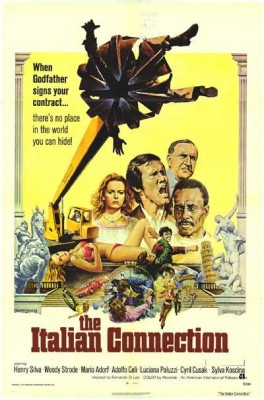 Di Leo's Milieu Trilogy continues with The Italian Connection, in which Mario Adorf, who had a showy supporting part in Caliber 9 has been bumped up to de facto star. Here he's lowly if genial pimp Luca Carnali, set-up to take the fall for a missing shipment of heroin that in fact has been pilfered by local boss Don Vito Tressoldi (Adolfo Celi, the main villain from Thunderball). American counterpart Corso (Irish actor Cyril Cusack) wants to make an example out of the falsely accused Luca, dispatching two seasoned hit men, Dave Catania (Henry Silva) and Frank Webster (Woody Strode, as always an imposing presence). Beautiful mob underling Eva Lalli (Luciana Paluzzi, also of Thunderball) meets the assassins in Italy, coordinating their search for hapless Luca.

The film is probably the best of the bunch, though it's uneven and less consistently compelling than Caliber 9, despite many outstanding moments. Adorf's performance is unforgettable, however, a mixture of naïveté, bravado, confusion, childlike innocence, outrage, and a kind of madness near the end. He's both a lascivious, violent pimp and a good provider for his family and a doting father. (His wife is played by Hercules's Sylva Koscina.) It's almost like a poliziotteschi riff on one of those mistaken-identity Bob Hope or Danny Kaye comedies, where cops and gangsters alike mistake some two-bit entertainer for somebody else, with everyone trying to kill him.

The irony and the violence escalate with each successive film, and The Italian Connection features an incredible, extremely violent car chase that's especially good by Euro-crime standards.

I found myself listening to the English soundtrack on this title, as the actual voices of Silva, Strode, and Cusak are utilized, though others have dubbed Celi and Paluzzi, even on the Italian tracks, apparently. (****) 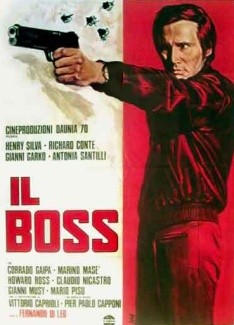 Henry Silva returns for The Boss, playing an even more brutal hit man, yet one with a strangely tragic and sympathetic air. It's a compelling, endlessly fascinating performance, one of Silva's best.

But Nick is the loyal soldier of Don Corrasco (Richard Conte), an older and wiser mob boss, not Don Giuseppe. When Giuseppe agrees to pay ransom for his daughter's safe return, Corrasco orders Nick to murder Giuseppe lest his organization appear vulnerable.

Between horrific murders, there's a beguiling sadness to Silva's Nick, an orphan who nonetheless unhesitatingly murders Giuseppe, the man who raised him. And like themes found in Di Leo's other crime films, there's a tragic irony in Giuseppe's devotion toward a daughter unworthy of his sacrifice, a heroin addict who unapologetically sleeps with her captors, and later with Nick himself. Nick may be a vicious killer, but even he has standards, and is appalled by her lack of a moral code.

As with The Italian Connection, Henry Silva's and Richard Conte's own voices are heard on the English soundtrack. Conte, in one of his last roles, is also exceptionally good, projecting intelligence and leadership. Watching him in this, you realize he'd have been an excellent Don Corleone in The Godfather, a role for which he was seriously considered. 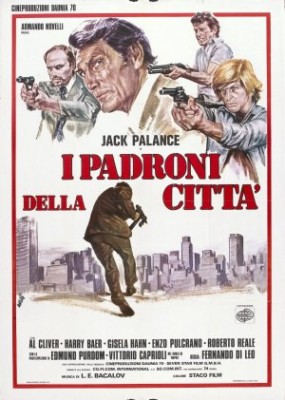 A modest step down is Rulers of the City, marred by a less interesting leading player (Harry Baer, a German) in the central role of Tony, a cocky young Mafioso, who's no match against Moschin, Adorf, and Silva in the previous films. Iconic Hollywood menace Jack Palance is top-billed, but in fact his role isn't much larger than Lionel Stander's was in Caliber 9; he's onscreen for probably less than 15 of the picture's 96-minute running time.

A prologue set in 1960 shows the brutal murder of young Rick's (Luciano Bottin) father at the hands of Manzari (Palance). In the present day Rick, now an adult (and played by Al Cliver, Zombie), has infiltrated Manzari's gang. As the story begins he's on the outs with the mob boss known as Mr. Scarface, though the facial wound itself is rather unimpressive, little more than a scratch.

Rick teams up with Tony (Harry Baer), a cocky young lad trying to impress his own, penny-ante boss. When Manzari walks away from a 3 million lire debt, Tony and Rick con Manzari out of a cool 10 million lire, in a clever scheme where they pretend to be government auditors. Manzari wipes out most of Tony's old gang in revenge, though excitable veteran gangster Napoli (Vittorio Caprioli, Atoll K) survives and joins them.

Less pessimistic, less realistic than the three previous films, Rulers of the City ends the quadruple bill on a breezy, escapist note. Its plot more in line with a kung fu thriller, though it gets better in its second half with some clever turn-the-tables twists and decent action.

Jack Palance, in a smiling cobra portrayal, is fun to watch. Despite its less cynical outlook the film overall is a similarly authentic slice of petty crime life with atmosphere to spare. (***)

A region-free set, each title gets its own slim-case packaging and single-sided disc. The first three titles are 16:9 enhanced widescreen transfers that approximate their original 1.85:1 releases. The transfers are okay with a lot of room for improvement, but certainly watchable. Rulers of the City is 4:3 matted to 1.85:1, but it's a better transfer than the other three, and when zoomed in on widescreen TVs its sharp image comes out about even with the softer (and older?) 16:9 enhanced transfers. Rulers of the City also displays its English subtitles within the frame, so zooming it in on a widescreen monitor is not a problem.

All four films come with 2.0 Dolby Digital Mono in both their original Italian (with optional English subtitles) or English-dubbed. The subtitles and English dubbing vary quite a bit so it's worth checking out both versions.

Each title is loaded down with the kind of exhaustive extra features one expects from Blue Underground or Criterion. As it's considered the best film Caliber 9 also has the most supplements. Included are three documentaries: "Calibro 9," about the making of the film, "La Morale del Genere," a long featurette about Di Leo, and "Scerbanenco Noir," an exploration of the genre. As with the other documentaries in this set, they're full-frame, in Italian with English subtitles, and feature on-camera interviews with various collaborators, including actress Barbara Bouchet, composer Luis Enriquez Bacalov, and many others. Di Leo is also interviewed at length, apparently videotaped shortly before his death in 2003. Additionally there are text director biographies and filmographies (repeated on all four discs), and a photo gallery with commentary by actor Gastone Moschin.

More behind-the-scenes documentaries accompany the other discs, including "Alle Origini della Mala" (on The Italian Connection), "Sorie di mafia" (on The Boss), and "Città violenta" (on Rulers of the City). A 20-page booklet, complete with attractive bookmark, features an extended 2001 interview with Di Leo.

The Fernando Di Leo Crime Collection is an extremely handsome, worthwhile set, one of the year's best DVD releases so far and Highly Recommended.