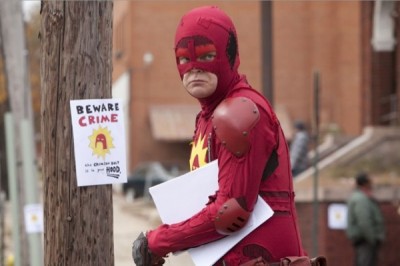 Humor can be so subjective. I might as well start off by saying that much, because I honestly didn't find anything even remotely humorous about James Gunn's latest creation Super and yet I am completely aware that the film will find some kind of audience: a small cult of fans, to be sure, but they will be devoted to the film for all of its craziness and random displays of supposedly humorous psychotic violence.  I didn't like Gunn's last effort either, the B-movie horror parody that seemed more like a below average schlock fest, entitled Slither.  The only thing I thought that film had going for it was sleek photography and an impressively solid cast. Unfortunately, the only thing I found of high quality about Super is the excellent casting alone.  Super is an ambitious but extremely vile example of cynical and even hateful film-making.

The story centers on a "loser" by the name of Frank (Rainn Wilson). We know that he is supposed to be a loser with the opening of the film focusing on his troubled upbringing where in one "funny" moment he even has to deal with kids peeing on him. What a depressed man he must become! Yet eventually he grows up to become married to Liv Tyler - okay, her character's name is actually Sarah, yet she is just so utterly underdeveloped that it feels like you are just watching a movie where she has no real part at all. Poor Frank claims to have had only has two moments in his life that ever seemed to make him happy, one being the day that he met his would-be wife, and another when he spotted a criminal that passed him by on the street that he was able to direct Police Officers towards. Unfortunately for Frank, his wife ends up leaving him when she falls for a drug dealer named Jacques (Kevin Bacon). So what can he do to get her back? He ends up going for the easiest solution and becomes a crime-fighting superhero dude (of course). Frank actually decides that he can take 'justice' into his own hands by becoming a masked hero named The Crimson Bolt. The prime inspiration comes from a Christian TV program with it's own costumed hero The Holy Avenger (Nathan Fillion). Frank soon meets the young and equally misguided Libby (Ellen Page) who will end up becoming his partner in fighting crime as the side-kick named Boltie. 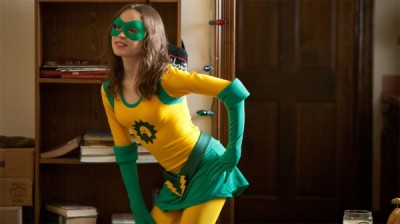 The film becomes gleefully violent and never seems to fail to push the buttons of viewers.  This is one of the biggest elements of Super that turned me off and made it hard for me to enjoy any of the pitch black dark humor. The Crimson Bolt may want to fight drug dealers, killers, and pedophiles but he also uses a wrench to bludgeon to death (at least by all appearances) a man who cut in line for a movie (along with the woman who let him do it). As the violence ensues we often see comic-book words and illustrations appear and disappear as if to reinforce the supposed comedic value such sequences are meant to have. I'm honestly not sure how murdering a man who cuts in line is considered comedy gold, but James Gunn seems to think it is. As the story continues to unfold the audience is subjected to seeing more senseless violence than I thought even possible. The blood spurts around wildly at times and all the while it feels disturbingly sick and unnecessary - and it cements the fact that this is not a film intended for or willing to appeal to large audiences.

There were a few things about Super I sort of liked. I enjoyed the craziness in the performance by Ellen Page as it felt like a weird mixture of her characters and performances in Hard Candy and Inception; she performed the part diligently and helped to elevate some of the material by seemingly becoming completely absorbed in the bizarre role. I also enjoyed watching the opening credits - which were rather cartoony and unique with good animation. The illustrations featured in that grand opening were more fun in invention than anything during the entire feature that followed. 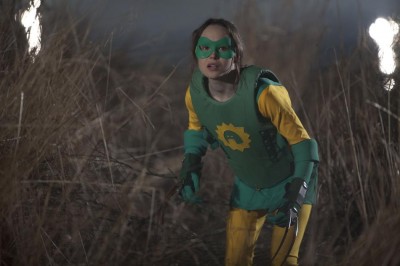 The film lacks any great comedic moments for those who don't find insanity and murder hilarious, and ultimately I think that is the films biggest setback. The sickening violence just never feels necessary or entertaining in the way it wants to be. I didn't like a lot of things about the movie though! Perhaps most surprising was that unlike Slither (which was competently shot and filmed) the camera-work was always mediocre at best for Super. I often felt like I was watching a home-made video shot and filmed with the intention of being used for comedy shorts found on YouTube.  Taking that idea a bit further - the entire film almost felt like individual sequences of stupid comedy videos that one might find floating around on the internet. Nothing is interesting enough or genuinely cohesive to the point of warranting the investment in these ideas and characters being explored in Super. That dissapointment is a real bloody shame, and even more gruesome than this twisted experiment.