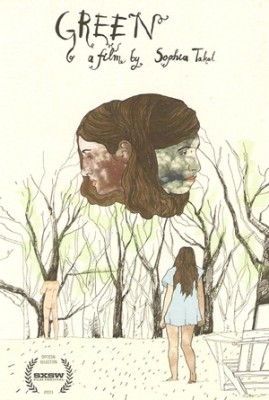 It brings me no satisfaction in stating my distaste for the feature-film Green, which was written, directed, and stars Sophia Takal. There are certainly a lot of layers to the film in that it tries to explore a number of ideas that are worthwhile and could make an interesting and artistic film. The focus of the film is in many ways an exploration of jealously, resentment, lust, and fear. Unfortunately, I was bored out of my mind by this unsuccessful art-film misfire that had it's premiere at the SXSW film festival.

The film's main cast consists of Kate Lyn Sheil as Genevieve, Lawrence Michael Levine as Sebastian, and Sophia Takal as Robin. Genevieve and Sebastian are in a relationship together and live alone in the country. Sebastian is trying to live the life of an artist and is being supported by his girlfriend. Strangely, the pair seem to be at times both in love with each other or perhaps only with themselves. Sebastian seems to think rather highly of himself and doesn't recognize the fact that he hasn't been particularly sensitive to Genevieve's surroundings or to her desires to express herself.

Robin soon enters the picture as a local girl who meets and seemingly befriends Genevieve. The two wind up spending an incredible amount of time together and engage in long and tedious conversations about things most audiences likely won't care about listening to. Eventually, Robin winds up spending a lot of time with both Genevieve and Sebastian. It doesn't take long before jealousy and fear sets in for Genevieve who suspects that Sebastian may be having an affair with Robin.

The entire film mostly consists of long, uninteresting conversations between these characters and beautifully photographed but somewhat lethargic scenes of Genevieve dreaming up her fears into psychical manifestations of what she believes is happening  between Sebastian and Robin. Most of these scenes play out like poor attempts at art house film-making. A common joke about sex in film-making asks 'What's the difference between porn and art? One is in focus, and the other isn't." It's an immature joke, to be sure, but in this instance I couldn't help but be reminded of it. There are several scenes that play out like this towards the end of the picture.

It wouldn't be fair for me to leave out the biggest mistake of the entire film. The horrendously miscalculated score sounds like something one would find in an alarmingly chilling horror film, but instead the actual story feels more like a drama with strong psychological undertones. There is nothing particularly horrific about the film and the music feels almost completely out of place. 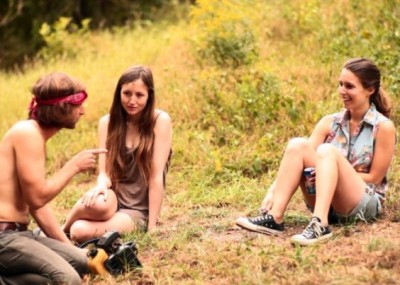 While the conclusion has a better dramatic backbone than the majority of the story displayed nothing really managed to grab on to me as especially profound or enlightening. The biggest obstacle may have been the unlikeable characters that never enchanted me. Had I cared more about any of them, on at least some level I think the experience may have been improved. The film ultimately manages to be a bit sad and erotic in tone but it never feels cohesive. While I ultimately have some respect for the hard-word that went into this project (which was made by only a few individuals), it's impossible for me to recommend the film for its undercooked plot, unlikeable characters, uninteresting dialogue, and the ultimately disappointing experience Green provided. In the end, I was left thinking "That's it?" Regretfully, that's it.