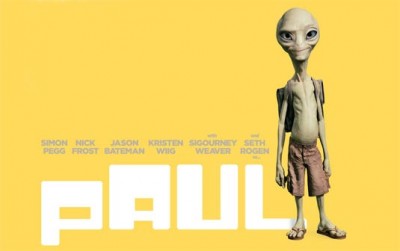 Sometimes there is a film that comes along and seems to be custom-made and tailored to a geek crowd: it has all the elements that one might consider necessary to enthrall and entertain those oddball fans who enjoy experiencing a film that is both out of the ordinary (appealing to rather unique sensibilities) and also right at home for any and all of those individuals who cherish reveling in the extraordinary and sublimely weird. These types of films are becoming increasingly rare to see from studio productions (to my dismay). However, when they are made the results are more loving and memorable than they have ever been before.  Paul is an example of a geek love fest done with enough style, originality, and grace to please even the most hardened of fan-boys and fan-girls everywhere. In other words - it's a success.

The setup is simple enough, but works extremely well to help create comedy gold. The film opens with introducing us to our two lead characters - Graeme Willy (Simon Pegg) and Clive Gollings (Nick Frost). These are two of the geekiest people to grace a big-budget production yet. We find them exploring the wonderful world of 'Comic Con' and afterwards setting out on a mission to visit 'important sites' on a road trip that will take them through the heart of seemingly weird and major UFO encounter spots. It doesn't take too long for them to encounter an alien then - and one that goes by the simple name Paul (voiced by Seth Rogen).  Here is an alien that looks like the kind from B-movies of yesteryear but that behaves like a raunchy (if surprisingly kind) frat-man-boy.  As it turns out, Paul was being held captive and escaped from his imprisonment. He needs help to get home, and thus one can expect cues for the E.T. references aplenty. Graeme and Clive decide to help Paul out (somewhat reluctantly - I might add) and let him travel along with them in their old-school RV. Along the way they get to know and befriend Paul while also running into a sheltered Christian woman named Ruth Buggs (Kristen Wiig) who ends up tagging along for the journey. Paul is also being chased by the macho badass Agent Zoil (Jason Bateman) and two bumbling idiots who work for him (but travel separately), Haggard (Bill Hader) and O'Reilly (Joe Lo Truglio). 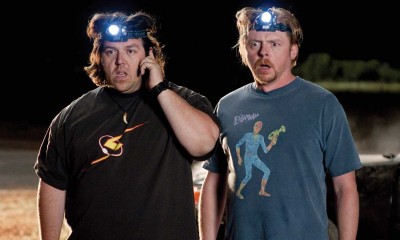 I'm sure plenty of film fans are aware of the presence of two of geek-cultures greatest contributing badge members Simon Pegg and Nick Frost, who together have worked on several Edgar Wright films (Shaun of the Dead, Hot Fuzz) and also on the incredible series Spaced (which was also directed by Wright). These are two of the funniest men making movies today and with their latest collaboration, Paul, the pair excels as both excellent writers (they wrote the film together) and as the leading stars. While it's hard to imagine everything about their performances being a complete stretch for either of them (they seem destined to be remembered as legitimate geeks that made a name for themselves while playing geeks) it would be selling them short to not notice how great both actors are at creating unique qualities for these characters (something they have managed to do with every role), and it is also a glorious feeling to recognize how perfect their comedic timing can be and usually is (including here).

The supporting cast also excels in Paul in ways I did not necessarily expect. While I consider myself a fan of Kristen Wiig based upon her comedic sensibilities on SNL, I hadn't seen her in any supporting role as good as this one. Wiig brings a definite charm to a role that adds an extra layer of humor and sympathy that makes the film all the more entertaining and memorable.  The three pursuers (Bateman, Hader, and Truglio) also managed to 'bring the funny' and created interesting characters with their performances that feel real and cartoony at the same time (though that much can probably be said of the entire cast).

The direction by Greg Mottola (Adventureland, Superbad) is also quite impressive. Here is a film-maker that excels at understanding comedy more than most currently working directors, and yet he is clearly also someone who can bring real depth and emotion to his projects in a way that brings vitality into each film. His sensibilities are definable as his own, and at the same time one can place his inspirations from 80's films (including works by John Hughes) as noticeable and appreciable. 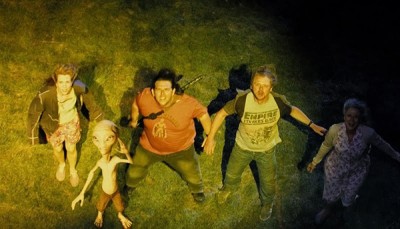 In the end, the very thing that makes Paul work so well is the fact that it never wavers from being true to itself. The entire cast, the screenplay, and the director make this effort work well - they all inherently understand the audience and want to please us (and not make a film to cater to anyone and everyone). That is a strength that more films could use. For now - I'll take this effort and hope that others will enjoy the film as much as I did. If you love the films of Steven Spielberg, James Cameron, and other sci-fi geeks - and perhaps most importantly, if you are a geek yourself: this film is for you.  Paul is for us to enjoy.