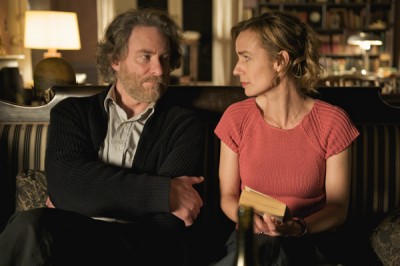 Poor Hélène (Sandrienne Bonnaire) is perpetually overlooked, overworked, and undersexed. She works as a maid at a fancy hotel on the French Riviera; she cleans houses some afternoons for extra money. Her husband is a hard-working painter, while their teenage daughter is embarrassed by their lower-class status. One day, while cleaning a room, she catches a glimpse of a couple on their balcony. They're beautiful and classy and very much in love, and they're playing chess. Hélène sizes this up and decides that she'd like that please, and so she starts playing chess. The other stuff comes later.

Caroline Bottaro's Queen to Play is a charmingly low-key seriocomic drama from France; its primary selling point here in the States is that it features Kevin Kline in, surprisingly enough, a French-speaking role. His character, Dr. Kröger, is one of those cranky, bleary-eyed professorial types that he's played so well over the last few years. Hélène cleans Kröger's house, and she discovers his chess set on a shelf and asks him if he'll teach her how to play. "Why does this game mean so much to you?" he asks. "I don't know," she replies, convincingly, but something in the way she says it captures him, and he begins to teach her the game.

The extended chess metaphor is a little on the clumsy side, as those things go; she informs us that "The queen is the most powerful piece," and you don't need a masters in English lit to figure out what they're driving at here. That complaint aside, Bottaro does a marvelous job of showing how her love of chess subtly but completely takes over Hélène's life--one great shot reveals her mopping a floor that is covered in checkered floor tiles, and it's not much of a leap for her to imagine that she's on a giant chess board.

As Hélène, Bonnaire is touchingly present. It's a quiet, nuanced performance--you see how she has become the wallflower, but when she talks about chess and sits down for a game, there's an urgency in her eyes. One of the film's more delicate subplots concerns her relationship with her daughter (who looks uncannily like a young Beverly D'Angelo), and how her newfound skill changes that relationship. As for Kröger, well, he warms up to her fairly quickly--perhaps too quickly, as soon rumors are circulating that theirs is more than a teacher-student bond. There is more too it than that, yes, but Bottaro wisely keeps their rapport evolving; it is the highlight of the film. Much of that is due to Kline, who turns in a beautifully modulated performance, subtle, but full of life and experience (it's also fun to listen to a recognizable American actor performing so comfortably beyond his native tongue).

The picture's only possible trouble is with its pace; there are moments where it threatens to become a glacial French chamber piece, though Bottaro's script is mostly too nimble for that. What it can't manage to avoid is the idea that any film dealing with a sport (no matter what the sport) must end with a big competition of said sport; when Kröger suggests that Hélène enter an upcoming tournament, my soul died a little. Game-centered or no, why must another distinctive indie bury itself in a painfully standard ending?

And the tournament does feel like a construct, but you know what? It kind of works anyway. It's undeniably involving and certainly helps pull the story towards a conclusion; perhaps it's unfair to discount the third act just because it goes to a predictable place (after all, I reminded myself, Searching For Bobby Fischer--the greatest chess film ever--also, in fact, ends with a chess tournament). Queen to Play takes a bit too long to get going and drags periodically throughout. But it has some lovely scenes and charming performances, and its closing shots are really something.