My first exposure to the Crying Freeman character is locked somewhere in my brain amidst, but involves a hazy recollection of a live action film starring Marc Dacascos. Nonetheless, I learned not long ago that film had little to do with the character, originated by Kazuo Koike, the creator of the famed duo Lone Wolf and Cub. However, from 1987 to 1992, single 50-minute animated adaptations were created, chronicling the origin of the titular character. These six episodes, presented here in their uncut form end up delivering viewers with some truly eye pleasing animation (often limited in execution), but eventually diminishing levels of successful narrative.


The first three episodes of "Crying Freeman" focus on the assassin Yo Hinomura, known to the underworld, as Freeman, an elite assassin for the Chinese crime ring, the 108 Dragons. We enter Freeman's world through the eyes of Emu Hino, a meek Japanese artist who opens the series convinced she will die for witnessing Freeman's hit on a rival group and her open interaction with him. With rival gangs and the police watching her every move, it's a shock when Freeman breaks into her heavily guarded house and reciprocates the same feelings Emu holds for him. A strange, unbreakable love is formed and with Emu by his side as wife, the second and third episodes focus on Freeman's ascension to the top of the 108 Dragons. 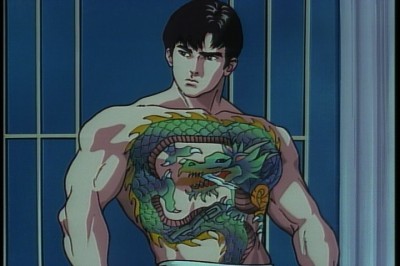 The first episode of "Crying Freeman," titled "Portrait of a Killer" works as a standalone venture and despite its brief runtime, feels truly epic in action and storytelling, establishing Freeman as a complex enigma. On one hand is an unflinchingly loyal assassin for the 108 Dragons, but deep within his superhuman physique, lies a broken soul who sheds tears for his enemies and finds a soul mate to connect to in the form of a woman so innocent she is truly his opposite. In the second and third episodes, "Shades of Death" and "The Killing Ring," which are in reality one extended episode, both Freeman and Emu grow as characters, with Freeman realizing his greater place in the world and Emu shedding her shell, using her marriage as a chance to begin anew and immerse herself in the world of her husband.


The series does a solid job of capturing what is likely a rich, dense manga series in such abridged runtimes, at least for the first three episodes. Common themes of purpose, honor, and power are explored both blatantly and abstractly, but as the series enters it's fourth entry, "A Taste of Revenge," the single continuity is gradually cast aside in lieu of stories that ultimately go nowhere and amp up the series' blatantly pornographic additions for what can only be comprehended as shock value. Freeman's ability to charm any woman who crosses his path is an important character trait early on when we see he views this as a mere tool in his trade, while his relationship with Emu is true love. In "A Taste of Revenge," "Abduction in Chinatown," and the finale, "Journey to Freedom," sex and nudity are purely exploitative, distasteful, and in many scenes unnerving. 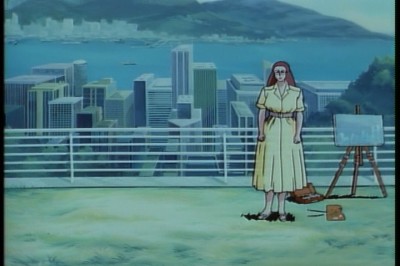 Only in the series' final moments do we see what the character arc was intended to be, but it's too little too late. Three great opening episodes are nearly tarnished by one very so-so transition to two outright embarrassing conclusions. "Crying Freeman" ends up being a victim of style over substance and a creative team that appears to lose all grips on who the character is from one episode to the next. Matters aren't helped by the series' rather static animation, at times resembling a more refined motion comic. When things are firing on all cylinders, it's passable as voice acting always feels competent and full of life. When things begin to drag, it's a tough slog to get to the end of an episode. "A Taste of Revenge" comes off as being far worse than it actually is due to an abrupt change in animation style that would make the biggest Rob Liefeld critic cringe. Thankfully things are back to normal for the final two episodes.


Sadly, as much as I loved the first half (I'd give it an "A-" on average) of "Crying Freeman" I was let down and ultimately disliked the second half (it averages out to a generous "D+") and thus can't really give the series a ringing endorsement. The series is absolutely made for adults, not only due to its themes but the previously mentioned nudity and sexual situations, but also a high level of overly stylized violence. As such, the anorexic stories that wrap of "Freeman's" saga just don't measure up and I wouldn't fault anyone who wants to check the series out to skip the final three episodes completely. I know I wish I had. 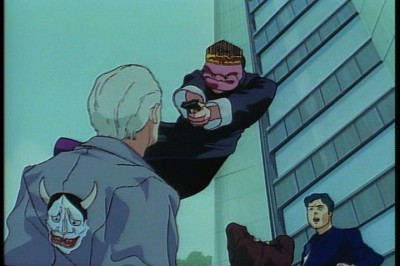 
The 1.33:1 original aspect ratio transfer is definitely a product of the late 80s and early 90s with colors looking just a tad washed out. There are some slight compression issues, but otherwise, the show quite faithfully captures images that appear to be lifted straight from the printed page at times.


The Japanese Dolby Digital 2.0 soundtrack gets the job done, with all the different sound layers mixed quite effectively together. Also provided is a Dolby Digital 5.1 English dub, which is a huge step-up in terms of immersion during action sequences, but the quality of the dub is a bit stiff and a comparison between subtitles and dubbed audio reveal an over simplification for audiences in the latter. English subtitles for the Japanese audio are included.

"Crying Freeman" is a very niche show. Extremely mature content aside, most viewers will be let down that an intriguing story is built up and ultimately discarded halfway through, with pure shock value taking over. Compared to the live action adaptations of Koike's other well-known work, Freeman doesn't nearly come off as being iconic or developed as Ogami Itto or Daigoro. If you know what you're getting into and realize there is no satisfying resolution, I recommend giving the first three episodes a trial and skipping the remainder. Rent It.