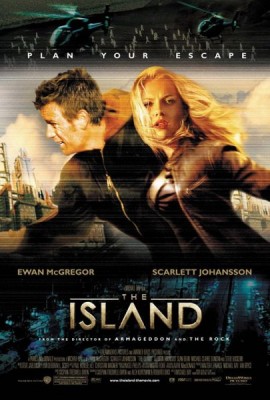 Birthed as human insurance policies for the rich and famous, clones Lincoln Six Echo and Jordan Two Delta live and work in a futuristic compound kept orderly by the fictitious threat of a pathogenic atmosphere outside. Everything is going swimmingly for the corporation selling these live donors, until Lincoln begins questioning his existence and rattling cages. Director Michael Bay adds some substance to his usual mayhem in The Island, a slick, entertaining thrill ride unfairly dismissed by critics and moviegoers when released in summer 2005.

The Island questions how far humans are willing to go to extend their lives. How much would you pay, and, if necessary, could you take the life of another to save your own? The plan is pretty genius: Sell clones to rich clients in case they get into an accident, contract a fatal disease or want a baby without the rigors of child birth. The only hitch is the clients don't know the clones are conscious, social beings. Educated to the level of a 15-year-old, each clone lives and works in a highly structured environment and lacks the sex drive of normal humans. Lincoln (Ewan McGregor) awakens one day to the nagging feeling that something is off about his life. Why can't he have bacon for breakfast? What is his work as a genetic researcher actually accomplishing? And why the hell does everyone wear white?

The compound appears to be inhabited exclusively by adults, but the clones are only a couple of years old. The biggest incentive for good behavior is the promise of leaving the compound for "the island." Travelers are selected by lottery to move out to the last paradise on earth, unspoiled by the hostile environment beyond the compound walls. Lincoln's friend, and object of his fledgling sexual affections, Jordan (Scarlett Johansson) wins the lottery and prepares to leave for the island. Before she leaves, Lincoln witnesses what actually happens to lottery winners. It's harvest time for these clones, which are then unceremoniously put down like dogs. Naïve to reality or not, Lincoln knows this fate will not do for Jordan, who he grabs in his mad-dash escape from the jaws of predatory science.

Many considered The Island surprising material for Bay, a director known more for his slick, big-budget blockbusters than storytelling. As a Bay fan, I won't praise The Island at the expense of Bay's other films, but I will say that it stands solidly on its own. The first reels are all science fiction discovery, as Lincoln peels away the layers of his faux reality. Lincoln often steals away to shoot the breeze with site technician James McCord (Steve Buscemi), who later helps Lincoln and Jordan get to Los Angeles, and Lincoln eventually finds a flying insect that shouldn't exist if the world is polluted. Once Lincoln and Jordan are on the run, The Island turns into a ripping chase, complete with Bay's staple car chases and downtown mayhem.

Along with strong acting by McGregor and Johansson, whose bimbo shtick is certainly in character, Bay culls big performances from Sean Bean, as the man responsible for the cloning operation, and Djimon Hounsou, a mercenary tasked with recovering the company's fleeing products. Lincoln tracks down his sponsor, Tom Lincoln, a Scottish cad with a penchant for yachting and casual sex. Tom's bedroom activities left him in need of spare parts, and the promise of a future trumps the enormous costs associated with growing a clone.

Although it does have its share of action, including two stellar car chases and some frenetic shoot-outs, The Island is a strong story told as subtly as Bay is likely to get. Viewers are told that cloning wasn't successful when subjects failed to achieve consciousness and were denied outside stimuli, so the corporation lied about their ambulatory existence. The Island doesn't stick around long enough to gauge the public's reaction to this little omission, but it asks a lot of interesting questions about medical science and human life. The Island isn't a perfect film; it's a good 20 minutes too long, and the product placement is nowhere in the vicinity of subtle. Nevertheless, Bay manages to create a highly entertaining action film with more than air between its ears.

Say what you will about Bay as a filmmaker, but it's hard to deny that the man can shoot a film. The Island looked amazing in theaters, and the Blu-ray's 2.40:1/1080p/AVC-encoded transfer is just as impressive. Detail is incredible, and the image is razor sharp. Bay oversaturated the image to reach his intended look, which includes quite a bit of grain, but this has no negative effect on the presentation. Colors within the compound lean toward slick blue and sterile gray, while life outside explodes with hot yellow/orange flare. Bay's highly stylized filmmaking has never looked better, and each chop of a helicopter rotor in his signature slow pans is crystal clear. The most striking shots are of the desert landscape above the compound, where the view goes on for miles. I noticed some very minor aliasing in a few shots, as well as a stray hair or scratch on a couple of frames early in the film. This is a fairly stellar effort from DreamWorks on the whole.

As impressive as the transfer is The Island's 5.1 DTS-HD Master Audio soundtrack. Bay's Blu-rays often threaten to level the block, and The Island is appropriately earthshaking. The mix is loud and well developed, sending cars crashing through the rear speakers, explosions rocking the LFE and Johansson cooing out of the center channel. The score is bold and resonant, and all pieces of the soundtrack are mixed expertly. This is the type of track home theater aficionados will use to show off their systems, especially if demonstrating the power of their subwoofer or fidelity of their rear speakers. Occasionally, the ruckus gets a bit too boisterous, but it's a small price to pay for the nearly perfect track. French and Spanish 5.1 Dolby Digital tracks are also available, as are English, English SDH, French and Spanish subtitles.

DreamWorks presents The Island on Blu-ray in a single-disc package, housed in an Elite Blu-ray eco-case. Although the artwork slightly trumps that of the DVD, no slipcover is included.

Although no newly produced extras are included, fans will be happy to have all previously available content together on one disc. First up is a feature-length commentary by Director Michael Bay. Bay's a good host, moving through the material with ease, touching on locations, the actors, staging the action and the film's weighty themes. The Future In Action (15:42) spotlights the film's big stunts and Bay's hands-on directing style. The Making of The Island (13:02) and Pre-visualization: Forward Thinking (8:09) were previously only available on a retailer-exclusive bonus disc. The making-of is a decent, if superficial look at the production, while the pre-visualization piece shows how Bay uses computer animatics to stage his action scenes.

Arguably Director Michael Bay's best film, The Island is a highly entertaining thrill ride that explores the divergence of science and humanity. Ewan McGregor and Scarlett Johansson are two clones birthed only to serve as living life insurance policies for their sponsors. Newly aware of their predicament, the pair looks to expose the deceptive operation to the world. Both the movie and Blu-ray are excellent and come Highly Recommended.