A dramatic and sometimes darkly comic look at D.H. Lawrence final years, when he and his muse/wife, a German aristocrat, were exiled from England, Priest of Love (1981) hits all the right notes. It's historically accurate yet very modern and relevant to today. It's funny and tragic, sometimes at once; lushly romantic while pulling no punches about the couple's sometimes rocky relationship. It photographs the beautiful places in the American Southwest, Mexico, and Italy where the real D.H. Lawrence spent his last decade. There's much fine acting, including star (if sixth-billed!) Ian McKellen, his first leading part in a film, and Ava Gardner, still beautiful in her penultimate movie role, and her best in many a year. Perhaps most importantly the meticulously researched film compels the viewer to return to Lawrence's writings. 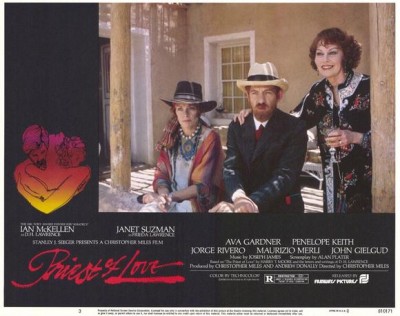 The movie picks up the story in 1914, in Cornwall. Lawrence (McKellen) and his wife, the former Frieda von Richthofen (Janet Suzman), are continually harassed by local police who accuse her of spying. McKellen's Lawrence gets a full-frontal introduction, swimming nude with William Henry Hocking in a probably though not explicitly gay relationship. All this and the publication of Lawrence's controversial writings attract the sanctimonious attention of standard-bearer Herbert G. Muskett (John Gielgud in an amusing performance) who, in an early scene, publicly burns Lawrence's The Rainbow.

The story continues in 1922 when the Lawrences, traveling with mostly deaf painter Dorothy Brett (Penelope Keith), immigrate to Taos, New Mexico, uncomfortably sponsored by wealthy patron Mabel Dodge Luhan (Ava Gardner). She proposes a utopian community of artists and writers. However, the volatile Lawrence bitterly resists her patronage, and eventually he and Frieda flee like a literary Bonnie & Clyde yet again: first to Mexico and later to Northern Italy where Lawrence's tuberculosis gets worse, he mellows a bit and grows close to, among others, Aldous Huxley (James Faulkner).

The picture is primarily concerned with Lawrence's relationship with Frieda rather than the writing process, though its depiction of the awful harassment and censorship problems they encountered, primarily in England, is so appalling that it becomes funny. When, for instance, Lawrence's explicit paintings are exhibited in London, Muskett orders a raid. However, in his zeal Muskett's order includes an adjacent painting by William Blake - which the police decide to leave behind because, after all, that artist is dead. As the police hustle off the paintings, they literally walk them past visiting VIP Aga Khan III, who's anxious to see them before they're hauled away.

The relationship between Lawrence and Frieda, she six years his senior, is alternately combative and tender. He has an intolerant personality and a terrible temper, prone to explosive bursts of anger with Frieda acting as his punching bag. And yet she's fiercely loyal and protective of him, in an early scene physically assaulting a reporter whose newspaper had been particularly insulting to her husband.

Intriguingly, Frieda not only left her first husband for Lawrence (whom she calls "Lorenzo" throughout the film) but in the process actually abandoned her children as well. The screenplay in no way condones this but, significantly, by the end of the film one understands Frieda's sacrifice.

Shot for 1.85:1 projection, Priest of Love in 1080p high-def exhibits pleasing fine film grain and rich color, doing justice to Ted Moore's cinematography. The film is sharp and bright and almost looks new. The 2.0 mono audio (English only) is notably strong though it's not supported by subtitling.

Priest of Love was a 10-year-long dream project for director and co-writer Christopher Miles (The Virgin and the Gypsy), who is interviewed on-camera and who interviews star Ian McKellen himself in two of the disc's many supplements. Miles also provides commentary over some deleted scenes and outtakes that include sister/actress Sarah Miles, whose footage was cut from the final film. The Way We Got It Together is a behind-the-scenes documentary with more archival footage and a new interview with actress Penelope Keith. Also included are a trailer and a still gallery. All of the extra features are in standard-def.

Informative, fascinating, and at times quite droll, Priest of Love is a terrific little film that deserves a much wider audience. Perhaps Ian McKellen's more recent fame combined with this higher-profile Blu-ray release will help it find a new generation of fans. Highly Recommended.