Though it's been released to DVD at least twice before, this "Commemorative Edition" of Ken Burns's magnificent documentary miniseries The Civil War (1990) is the one to buy if you've held off until now. It's less expensive than previous editions and some retailers are selling it at half that price - an incredible deal for 11-plus hours of riveting, living history. In this age of anti-intellectualism and anti-history, as our nation appears stubbornly determined to ignore George Santayana's advice about remembering the past, The Civil War seems now much more than merely a great document of that era. Watching it again all these years later, it's almost become a cautionary tale.

The series revolutionized the historical documentary. An unprecedented 40 million viewers tuned in to PBS to watch when it was new, and for director Ken Burns it launched a veritable industry of similarly intelligent, captivating documentaries ever since, most famously covering the histories of Baseball (1994) and Jazz (2001).

The nine-episode series, varying in length from just under 70 to 100 minutes each, are packed in six slimcases held together in a hardcover book-size case. The full-frame presentations are a big improvement from their original broadcast versions - the whole show was remastered in 2006 - though I could do without all the thinly veiled commercials that precede and follow each and every episode in the set. 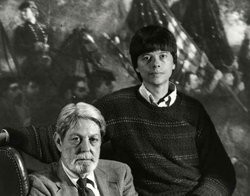 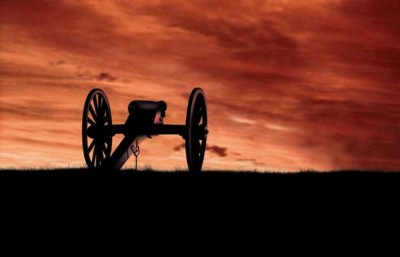 In documenting the American Civil War (1861-65), Burns is incredibly innovative in myriad ways. First is his emphasis on personal reflection rather than the minutiae of battle strategies and states-rights politics. Onscreen interviews with modern-day historians are minimized and selective. (I wouldn't be surprised if less than 5% of what he shot ended up in the final cut.) Instead, the focus is on the first-person testimony of those actually there, in letters written on the battlefield by soldiers on both sides, in diaries kept by Mary Chesnut, the wife of a Confederate officer, by newspaper columnists, abolitionists, escaped slaves, poets, generals, and presidents. Their intimate expressions of hopelessness, exhilaration, exhaustion, terror, confusion, repulsion, and just about every other emotion you can imagine vividly brings this age to life.

Like the similarly poetic Thames series The World at War (1973), The Civil War doesn't attempt to document every minor skirmish, though it is obsessed with little details about daily life: the price of a barrel of flour, the food Union and Confederate soldiers ate in the field, the diseases that killed as many men as in battle. Most of all, it is obsessed with the human cost of war, expressed in Matthew Brady's famous photographs and shocking figures in which entire American communities lost all of their men to disease or in battles hundreds of miles from home.

The World at War begins unexpectedly, not with a barrage of facts and figures about events leading up to the Second World War but rather with ghostly aerial shots showing the remains of Oradour-sur-Glane, a small French village whose entire population was exterminated by the SS. The Civil War is similarly wise and often quite poetic, noting the many ironies of the war, and it frequently takes the time to pause and reflect upon the cost of war, such as the indescribably beautiful and sad prophetic love letter, read in its entirely, written by a soldier named Sullivan Ballou to his beloved wife, Sarah, on the eve of battle.

In addition to Burns, The Civil War made celebrities of its never-seen narrator, David McCullough, and especially its most quoted onscreen Civil War historian, Mississippi-born Shelby Foote (1916-2005), whose uncannily astute observations are as one who was actually there, and who expresses volumes in a minimum of words. One example: near the end of the series, noting the change that had taken place over four years of war, Foote notes that how, before the war, in print the United States of America was always expressed in the plural sense, e.g., "the United States of America are...." But that after the war, without fail, it was "the United States of America is." The war fundamentally changed people's minds about what America had become.

Beautifully underscoring this is the intelligent selection of period music, though The Civil War's most haunting theme by far is contemporary: "Ashokan Farewell," a "Scottish lament written [in 1982] by a Jewish guy from the Bronx," according to Jay Ungar, its composer. It's beautiful and complements the program perfectly, and no less effective the 25th time it's heard than the first.

Another important facet to the show rarely discussed is how Burns constantly incorporates newsreel footage of elderly Civil War veterans at reunions as late as 1935, with some footage stretching even to the late-1950s, when the last recognized Civil War veteran finally passed into history. Also included are preserved audio recordings of freed slaves and an interview with a 104-year-old woman whose father was an escaped slave that later killed his former master in battle.

I think what Burns is doing with all this is demonstrating that while the Civil War concluded more than 125 years before the series first aired, that despite pre-dating motion picture film, our connection to that seemingly distant past is much more immediate than we think. That perhaps the newsreel footage of that last soldier dying in the late-1950s isn't just there because the footage was handy, but rather to make a connection to people like Burns (having been born in 1953) who, however briefly, once shared the same country with survivors of the American Civil War.

The Civil War is presented in a fine full-frame presentation. I suppose a Blu-ray release is inevitable, but I can't see how they'll be able to improve much upon what's here without going to the great expense of reshooting photographs, paintings, etc. The region 1 discs, distributed by Paramount, have also been remixed for 5.1 surround, which really comes alive during the battle sequences, and enhances all the music. The nine episodes are presented two to a single-sided, dual-layered disc (except the 99-minute first episode, which gets its own disc). As stated above, sponsors and other funding acknowledgements precede and follow each episode, so keep that remote handy.

The supplements - some old, some brand-new - include Ken Burns commentary tracks, battlefield maps, text biographies, and quizzes that accompany each of the five main discs. A sixth disc of extra features includes heretofore unseen interview clips with Shelby Foote and a new on-camera interview with Burns, plus a final series of interviews from 2002 with Burns, Foote, musicians Ungar and Molly Mason, and writers George Will and Stanley Crouch, that discuss the show's impact. A big thank you to Rebecca Carr at PBS for clarifying what's what.

An absolute must, Ken Burns's The Civil War is one of the greatest historical documentaries ever done, and should be seen by one and all. A DVD Talk Collector Series title.