Batman: The Brave and the Bold - Season Two, Part One


Previous Batman: The Brave and the Bold Reviews: Season One, Part One / Part Two 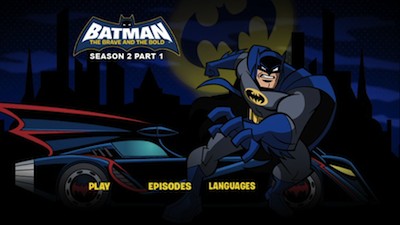 I've really started to look forward to the intermittent DVD collections of the Brave and the Bold cartoon series, and the most recent, Batman: The Brave and the Bold - Season Two, Part One, does not disappoint. Collecting twelve episodes from the Cartoon Network series' second cycle of shows, it's another great round of skillfully animated superhero adventures.

For those who don't know, Batman: The Brave and the Bold is a cartoon show featuring the caped crusader teaming up with a rotating cast of heroes. Just about every corner of the DC Comics universe is accessible to the animators, and so we get characters as disparate as the Phantom Stranger, the Metal Men, and B'wana Beast alongside other more well-known comic book icons like Aquaman and Green Lantern. Even more exciting for funnybook trainspotters is the fact that each episode is almost a two-for-one deal: every show starts with a short standalone segment featuring one team-up, and the main segment is a longer adventure featuring another. So, for instance, the fourth episode in this collection, "Aquaman's Outrageous Adventure," kicks off with a short bit with a time-traveling Batman (voiced by Diedrich Bader, best known for his supporting role on "The Drew Carey Show") helping out the daredevil pilot Enemy Ace in World War I, an event totally unconnected from the main program, in which Aquaman gets bored on a vacation with his family and goes seeking adventure (and finding it alongside Blue Beetle, Green Arrow, and eventually Batman--sometimes the writers like to go into the toybox for seconds and thirds). In rare cases, such as the Challengers of the Unknown bumper in the third episode, "Revenge of the Reach," the production crew is setting up a later story, drawing a thin thread between scripts in addition to their ability to stand alone.

The early entries on Season Two, Part One focus on lighter, more comedic adventures. The first disc leads with "Death Race to Oblivion," a kind of "Superfriends meets Whacky Races" concept, where the intergalactic villain Mongul pits various heroes (Batman, Huntress, Green Arrow, Guy Gardener, and Plastic Man) against a collection of villains (Joker, Catwoman, Gentleman Ghost, Black Manta, and Steppenwolf) in a literal race to save the planet Earth from destruction. The humor is a little too broad for my tastes; I prefer when the series plays the laughs off of character foibles, like its hilarious take on Aquaman in "Aquaman's Outrageous Adventure!" or the super fun double-dose of Plastic Man in the second episode, "Long Arm of the Law!" 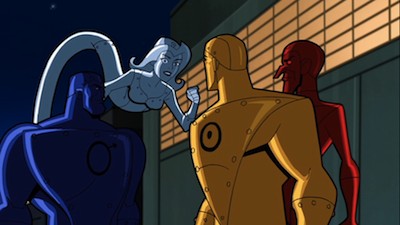 Other shows play it more serious, though still with the same light-hearted tone of the best Silver Age comics. The first disc ends strong with episodes featuring both the Justice Society of America and some of the big heroes' teen sidekicks--namely, Robin, Speedy, and Aqualad. Both episodes play with time, showing the heroes at different stages of life and connecting the elements together. Disc 2 also begins with a super fun adventure starring the goofy robotic heroes the Metal Men. That show, titled "The Clash of the Metal Men," captures the science-based whimsy of the oddball property perfectly.

The 1960s vibe is also most evident in the alternate dimension story in episode #9, "The Super-Batman of Planet X!" That features Batman going to Zur-En-Arrh, where he meets an alternate version of himself, a colorful funhouse-mirror caped crusader that was in the old comics and recently resurrected by Grant Morrison. The fun starts when regular ol' Batman discovers that he has super powers on Zur-En-Arrh, making him a bit like Superman. Old-time superhero fisticuffs are also to be had in the next episode, "The Power of Shazam!" What is fun about the Captain Marvel characters being incorprorated into The Brave and the Bold is the animators adopt the 1940s style of C.C. Beck, complete with pinpoint eyes. 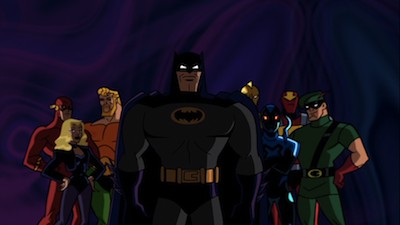 The twelve episodes presented on Season Two, Volume One are as follows:

1. "Death Race to Oblivion!" featuring a fun opening with Captain Marvel, followed by Mongul's all-star space race adventure, with Batman, Green Arrow, Guy Gardner, Huntress, and Plastic Man and his comic sidekick Woozy Winks.
2. "Long Arm of the Law!", both bits have Plastic Man, though the adventures are unrelated.
3. "Revenge of the Reach!": Challengers of the Unknown on Dinosaur Island to start, leading into a cosmic adventure with Blue Beetle and the Green Lantern Corps. (This episode was also an extra feature on the Green Lantern: Emerald Knights disc.)
4. "Aquaman's Outrageous Adventure!": Enemy Ace; Aquaman and a bunch of other heroes, including cameos by Atom, Red Tornado, and more.
5. "The Golden Age of Justice!", Detective Chimp, and the Justice Society of America, featuring old-school versions of many contemporary heroes.
6. "Sidekicks Assemble!": Both segments feature Aqualad, Robin, and Speedy, but in different timeframes and at different ages.
7. "Clash of the Metal Men!": Aquaman appears at the start in a continuation of the Starro teaser from episode 3, introducing the Faceless Hunter, and then we are treated to a full Metal Men adventure.
8. "A Bat Divided!": The origin of Firestorm is the focus of the main show, with the teaser being a short gag with Booster Gold.
9. "The Super-Batman of Planet X!": The Metal Men return in the first portion, with series regular Green Arrow guesting before the plot shifts to feature Batman of Zur-En-Arrh.
10. "The Power of Shazam!": The Faceless Hunter features in a full explanation of the Starro mission; Captain Marvel and Black Adam are the guests in the full plot.
11. "Chill of the Night!": This Paul Dini-scripted episode has a magic theme, with Zatanna in the lead bumper and Spectre and Phantom Stranger featuring in the main story. They are voiced by mark Hamill and Kevin Conroy, Joker and Batman from Batman: The Animated Series; more importantly, in the flashbacks, Bruce Wayne's parents are Adam West and Julie Newmar, Batman and Catwoman from the 1960s TV show.
12. "Gorillas in our Midst!": Spectre at the start, animal-themed characters in the full teleplay: Detective Chimp, B'wana Beast, and Vixen.

It appears that the Starro episodes will lead the eventual Batman: The Brave and the Bold - Season Two, Part Two collection. 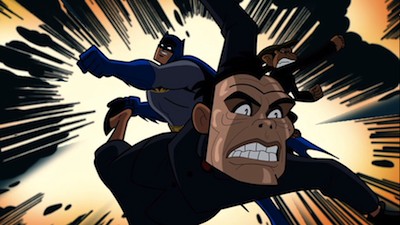 Video:
As with previous discs, this volume of Batman: Brave and the Bold features the shows in the original broadcast ratio of 1.78:1. The anamorphic transfer is bright and colorful, showcasing the excellent animation in perfect fashion.

Sound:
The original soundtrack is mixed in Dolby Surround and sounds great. The volume is strong and punchy.

There is an additional Spanish version in stereo, and a Portuguese dub. Both languages also have subtitle tracks, and there is also a French option and English Closed Captioning. 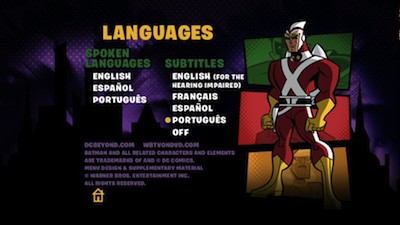 Extras:
This a two-disc set comes packaged in a standard-sized plastic case with a hinged tray; unlike previous releases, though, no cardboard slipcover.

The first disc has a couple of trailers. One for the new Thundercats series, and another for the Green Lantern cartoon.

FINAL THOUGHTS:
Highly Recommended. Batman: The Brave and the Bold - Season Two, Part One is another good time collection of superhero action and adventure. Each episode pairs Batman with other heroes for classic-style punch-ups. Some are played for comedy, some more serious, and there is rarely a bum note to be had. The show grows more confident in each cycle, taking on bigger adventures and expanding the character roster. If you dig Silver Age comics or just generally like to have fun, these discs make for some swell viewing. 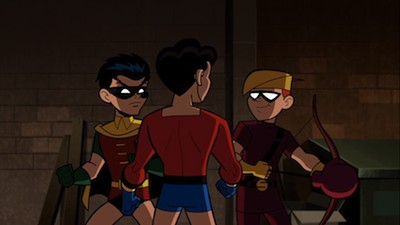