House of the Rising Sun

For "House of the Rising Sun" to work as a thriller, it needed a new cast, a fresh script, and a director with a little more interest in properly establishing characters. Muddled and frequently comatose, the picture yearns to be a turbulent ride of crooks and cops, yet it never rises to the occasion, generating a feeble mystery sold by a cast of brutes trying to pass themselves off as actors.

Working security for a mob-owned casino/brothel, ex-con/ex-cop Ray (Dave Bautista) finds himself in a tricky situation when crooks storm the premises and steal a fortune on his watch. Swearing his innocence, Ray is tasked with finding the true culprits, forced to use his police contacts to connect the dots. Traveling all over the snowscapes of Grand Rapids on the hunt for clues, Ray encounters a series of troubling individuals who may or may not be tied to the break-in, including thug Tony (Dominic Purcell), former flame Jenny (Amy Smart), and crime boss Carlos (Danny Trejo). 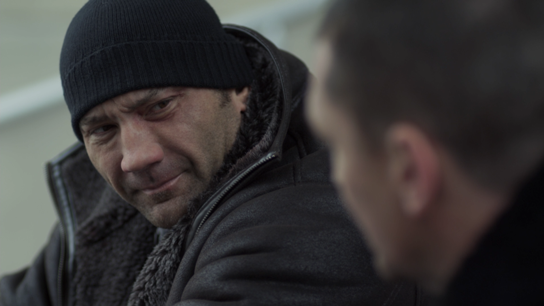 "House of the Rising Sun" reveals itself to be an adaptation of a book by Chuck Hustmyre, who also snatches a co-writing credit. The film's literary origins are difficult to spot outside of the sheer number of last names batted around, requiring viewers to keep some scrap paper and a pen close just to get a handle on this community of cons. Director Brian A. Miller is no help, halfheartedly arranging the personalities in a manner that neuters interest in the proceedings, spending more time following Ray around Grand Rapids than creating a irresistible series of betrayals and a parade of unforgettable characters.

Miller seeks out a gritty feel of paranoia and revenge, but there's no visual effort to fuel his cause. "House of the Rising Sun" looks flat and unconvincing, and while I adore a good snow-shocked setting to keep things interesting, Miller doesn't rise up to the challenge, unable to free himself from his low-budget filmmaking prison. Not helping matters is the cast, with Bautista a striking figure of intimidation without the raw talent required to make his specialized screen presence riveting. He's a mumbler when the role necessitates some amount of bold charisma to shine. Purcell takes the opposite performance approach, hamming it up as the thorn in Ray's side, pushing too hard to come across as a plausible, spastic threat. 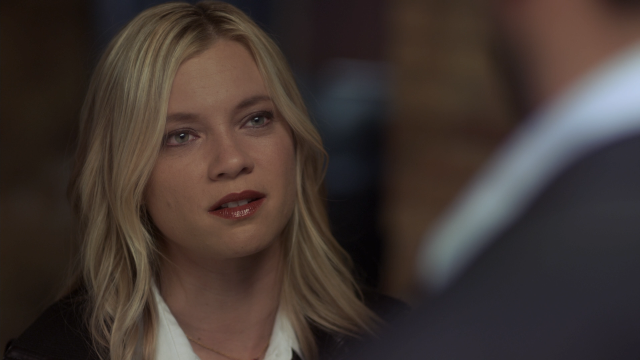 I'm not sure what Smart is even doing in a dingy movie like this, but hey, we all have bills to pay.

Ultimately, "House of the Rising Sun" has a major problem with predictability, spending the majority of its running time working through investigations, dodging bullets, and arranging scowling sessions only to end up at the most obvious choice for a villain. It's unintentionally hilarious. Miller could've invested a lot more time with red herrings and distractions to keep the film at least semi-mysterious. 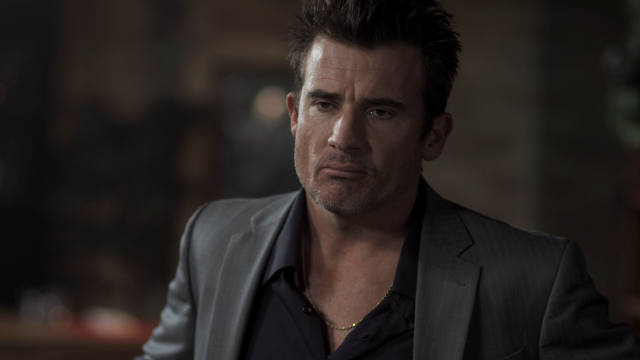 The AVC encoded image (1.78:1 aspect ratio) presentation is generally lackluster, offering diluted colors that fail to retain much presence, extending to confusing skintones that never feel human. Clarity is soft, unable to supply much detail around the frame, reducing the power of facial textures and losing the feel of costumes in many shots. Shadow detail is unsatisfactory, frequently incapable of supporting low-light encounters.

The 5.1 DTS-HD sound mix is more concerned with sustaining the potency of violence than clarifying verbal encounters. Bautista's growly delivery gets lost in the mix on a few occasions, with soundtrack cuts and outdoor atmospherics overwhelming the dialogue at times. Scoring is soft and rarely compelling. Most of the power here is reserved for gunfights and chase sequences, which provide some moderate low-end kick and directional activity. 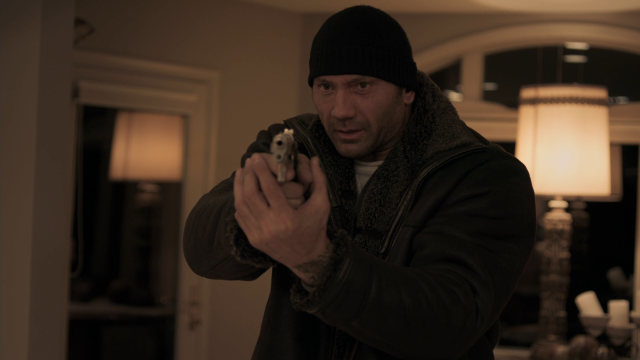 Shockingly, there's a feature-length audio commentary with director Brian A. Miller and actor David Bautista. The pair provides a fundamental commentary experience, spending the majority of the track pointing out screen details and commenting on the cold weather (the film was shot in Michigan during Christmas). Interestingly, the star reveals more personality here than onscreen, happily chatting up the picture with his director. Stretches of tedious play-by-play often ruin the pace of the information.

"Making Of" (9:22) is a standard promotional offering filled with platitudes and film clips. Flashes of BTS footage are present but not the priority.

"Interviews" (11:53) sits down with Miller, Bautista, Amy Smart, and Danny Trejo for some on-set conversations, talking up motivations and thoughts about the shoot.

A Trailer has been included. 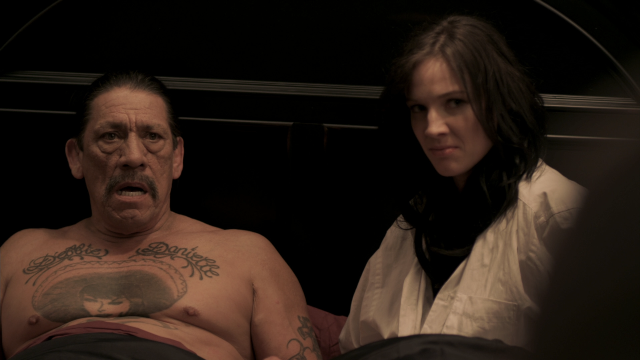 There are dirty cops, scumbag crooks, a sprinkling of misogyny, and a soundtrack of wuss-metal hits, yet there's not a drop of excitement anywhere to be found within this dreary picture. It's a slushy cocktail of sin wasted on filmmakers not up to the challenge. 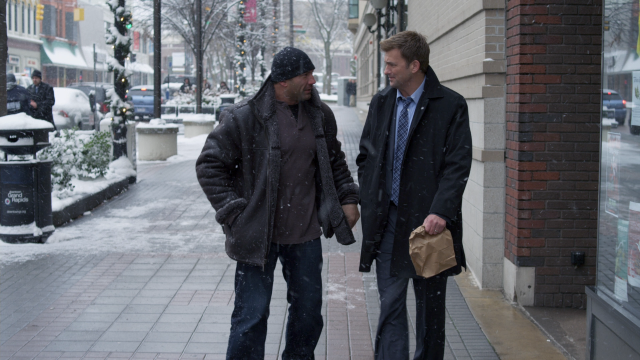