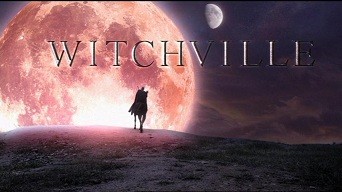 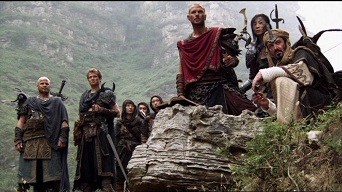 Those two words comprise the opening credit statement to Witchville, the umpteenth made-for-cable movie to premiere on the SyFy Channel before getting a cursory home video release. Truth be told, I've reviewed so many SyFy movies in my tenure at DVD Talk that it is now difficult to come up with a novel way of beginning a review for a title like this. I did some slight research on Witchville before sitting down to write this review in order to jog my own thinking process. As I type this, the Internet Movie Database has links to four full-length reviews of this production; three are in English. All three comment early on about this being a SyFy production. That's because, in some ways, all that needs to be said about the film is that it's a SyFy production, and anyone at all familiar with the channel's weekend programming knows exactly what to expect here. SyFy is nothing but prolific in its standard approach to filmmaking over the last decade and a half. "SyFy Presents" means this is low budget nonsense with unconvincing CG effects and forgettable storytelling. That's not necessarily a bad thing, as B movies have their place, but Witchville is disposable entertainment: just barely watchable but fleeting and unmemorable.

I don't mean to stomp all over Witchville, however, as there were a few elements of this convoluted sword and sorcery fantasy that actually worked. To set the scene first, Witchville occurs on the medieval planet(?) Draeganoth, a name involving a clear derivation of the word dragon, yet dragons do not inhabit the movie. Go figure. Instead, Draeganoth has apparently been cursed by a coven of witches, led by the evil Red Queen (Sarah Douglas). Crops have failed, and the peasants struggle to live. Enter Prince Malachy (Luke Goss - who played the lead in Death Race 2, undoubtedly in no small part because of his likeness to action star Jason Statham), who is thrust into leadership upon the death of his father. A witch hunter named Kramer convinces Malachy that said witches are to blame and joins Malachy and a small retinue of knights - probably as many as the film could afford - to go out on a quest to defeat the Red Queen. Oh, Kramer has a book on witchcraft that the Red Queen wants really badly, although it's not exactly clear why. And Malachy's crew is joined by some random Asian sword masters midway on his quest. The movie's plot thickens with Star Wars-esque familial revelations that don't make a lot of sense, and the action is punctuated with lots of swordplay. A few fights, especially with the Asian fighters, are nicely stage, but the majority are clumsy and unconvincing.

Witchville's plot is a jumbled mess, especially in the second half. Its CG effects work is spotty at best, though it's plentiful for what it's worth. Sitting all the usual SyFy complaints aside for the moment, though, I'll give this movie some credit. First, while the story may not make sense per se, it does offer some twists that came as a surprise, especially in the film's climactic scenes. Score one for the screenwriters. Filmed in China, Witchville also takes good advantage of the nation's lovely countryside, giving the film more of a cinematic feel than it has any legitimate right to. And while the hero characters were fairly stereotypical, the coven of witches was interesting in conception. It's suggested that the coven operates like a bee hive, with the Red Queen serving as a, well, queen bee. I sort of wish this idea was explored further, as the idea is an intriguing concept.

To further this interest, I have to say that the Red Queen's conflicted acolyte (and daughter!) Jozefa is a cool character that SyFy fans will really dig. Jozefa is played well by the lovely MyAnna Buring, who was in - for my money - one of the best horror films of the last decade: Neil Marshall's The Descent. Buring's costume suits her mysterious role well (she half-hides behind her red hood and cape effectively), and her sleek appearances in the movie, kept to a minimum in the first 60 minutes, are cryptic and deadly. In a better-financed and better-executed film, her character could have developed a cult following. 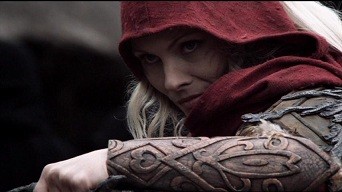 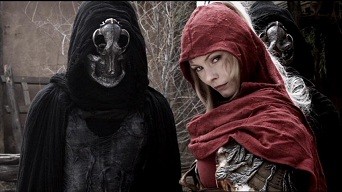 Still, I'm not sure that these positives outweigh the typical SyFy negatives (which I honestly don't feel like delineating in detail once again in another review). I'll go with a Rent It recommendation - if you're like me and don't have cable - as the movie was engaging enough to sit through once. I'm also bumping up my score for the film itself because of the Jozefa character, who I thought was pretty cool in a comic book kind of way. 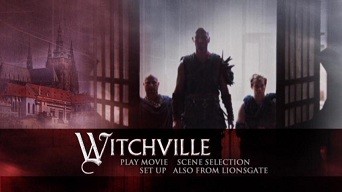 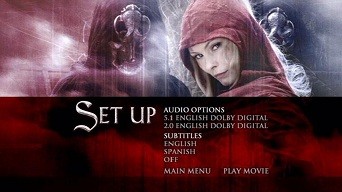 Lionsgate gives Witchville an anamorphic widescreen presentation with a 1.78:1 aspect ratio that I'd imagine represents its original television exhibition. Colors seemed a bit muted, but detail was strong. Overall, it's a pleasing visual representation.

Two audio options are available: 5.1 Dolby Digital and 2.0 Dolby Digital. Both are English language. The 5.1 track appears to be the default, with dialogue well-represented in the otherwise stereo-ish mix. Optional subtitles exist in English and Spanish.

A trailer for The Last Exorcism and commercials for the seven Saw movies, the eight After Dark Originals films, Fear Net HD, and epix precede the main menu. They're also available in the menu system through a Also From Lionsgate link. And that's it for extras.

Witchville has a few interesting ideas and a fantastic supporting character in MyAnna Buring's Jozefa, but it otherwise doesn't deviate from standard SyFy Channel fare (shoddy effects work, stereotypical characters, perfunctory acting, etc). It's worth watching once if you like this sort of thing, but I wouldn't go any higher than a Rent It recommendation.