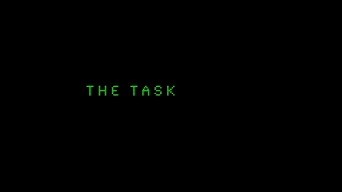 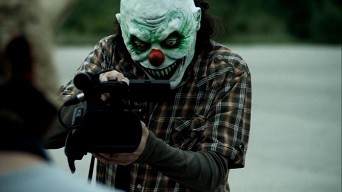 For four years, distributor Lionsgate released the infamous After Dark Horrorfest "8 Movies To Die For" lineup of low budget and foreign fright flicks onto DVD. Traditionally, each octet of horror flicks was released simultaneously in both individual and box set formats. 2011, however, sees several changes made to this annual home video paradigm. First, After Dark's Horrorfest is now under the banner After Dark Originals, with each of the eight flicks coming from an original script and made in-house. In addition, the movies are coming out piecemeal (still from Lionsgate, though), with two of them - The Task and Scream of the Banshee - released this week. They're on DVD only - no blu-rays yet. Boo!

Clearly, DVD Talk has tasked me with reviewing The Task (ahem). And I have to admit, after a brief sojourn on the Internet, I wasn't sure I was up to the challenge (double-ahem). For you see, The Task currently has a fairly grim 3.7 / 10 aggregate user rating on the Internet Movie Database, and the user comments can get decidedly unkind. Add to that a little fatigue on my part: I've already seen enough of this little new subgenre of horror that portrays reality shows gone wrong to think of it as decidedly clichéd. And, to be honest, the first half of this film didn't do a whole lot to reassure me that my time was being well-spent. But then, the plot thickened somewhere in the middle and the goings-on became a lot more clever and interesting. More on that in a bit.

The Task, to start off, follows a reality TV crew and a septet of young contestants who are challenged to spend one night in an abandoned prison supposedly haunted by its long-dead crazed warden for a $20,000 prize. Now, let's set aside that the movie, right from its very start, felt like a mash-up of Halloween: Resurrection and William Malone's delirious remake of House on Haunted Hill. Creative novelty is not going to be found here. The premise itself is rather clumsily initiated, with the contestants being kidnapped(!), handcuffed by masked crewmembers, and taken against their will to the prison. It seems they had all been interviewed a while back about their greatest fears; I sure hope they signed a waiver at that time, though, to allow for such a ridiculous method of appearing on a reality show.

The dumb setup aside, I had another early issue with the film. It's obviously supposed to be set in the United States (the dollar as a unit of currency, etc.). However the film employed a UK casting agent, and the main cast are clearly English with English accents. Why not just set the movie in England? This stuff would have at least seemed a bit more authentic. I'm not knocking the actors, who are uniformly professional, especially Antonia Campbell-Hughes as the plucky final girl. It's just an oddly off-putting aspect about the movie.

In any case, one of the seven contestants decides not to accept the offer (for reasons later explained), but the six others do. So, off the sextet goes into the prison - cameras hidden everywhere to record their movements, as the behind-the-scenes crew congratulate themselves on their cleverness. The contestants are given tasks to complete - contextualized by an obnoxious clown who appears to them on a TV - based upon their biggest fears. And so, the first 40 or so minutes go, with the contestants walking around dark corridors and performing supposedly creepy tasks.

As I suggested before, though, this yawnfest perks up somewhere in the middle of its runtime. I'll try not to spoil things too much, but the behind-the-scenes crew themselves become disoriented as the reality TV script they've set up starts taking unexpected turns. The second half becomes an admittedly interesting (albeit unlikely - although the entire film rests on an unlikely premise, so that's par for the course) mystery as the viewer is left guessing what's real, what isn't real, and whether the prison is indeed haunted by the menacing specter of the warden. The Task then concludes on a couple of twist / shock endings, with one rather disappointing twist trumped by a very satisfying second twist. So, I'll give screenwriter Kenny Yakkel some credit: he pitches himself into a corner with his screenplay but manages to work his way through the trouble spots to a satisfying conclusion.

Ultimately, while The Task may not be the best After Dark entry, it certainly - by far - is not the worst. The vitriol heaped against it on the Internet Movie Database may be justified based upon its ho-hum first half, but The Task manages to redeem itself with an engaging second half. Based upon this, I'm giving it a mild recommendation to fans of the After Dark brand of horror. 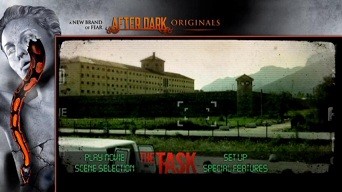 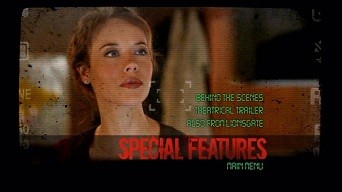 Lionsgate gives The Task an anamorphic widescreen presentation with a 1.78:1 aspect ratio. Details and colors are sharp and well-presented. No major issues here.

Two audio options are available on this disc: 5.1 Dolby Digital and 2.0 Dolby Digital. Both are English language. The 5.1 track appears to be the default and offers a dynamic mix that captures the imagined ambient sound landscape of the haunted prison effectively. Optional subtitles are available in English and Spanish.

Trailers for Husk, Prowl, Seconds Apart, and Fertile Ground as well as ads for Psychoville, epix, and break.com precede the main menu. They're available - collectively - in a Special Features sub-menu under a link called Also From Lionsgate. In addition, separate links provide access to a trailer for The Task itself and a Behind the Scenes featurette (5:16), which, as its runtime suggests, is full of soundbyte comments and not very in-depth.

The Task is a flawed entry in the current After Dark Originals lineup of low-budget horror films, but the layered mystery of what's going on in this reality-show-gone-awry plot during the second half of the film won me over. It gets a mild recommendation for the After Dark fans out there.