Karen Cries On The Bus 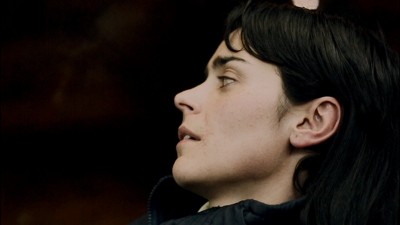 Karen Cries on the Bus is one of those increasingly rare examples of cinema that aims to bring the audience closer to understanding a central character in a realistic and engaging way. It doesn't have a particularly complicated story (so many viewers are going to recall elements of this story from other movies) but the screenplay is full of genuine life and the performances capture that feeling. This is a story told in the right way and that needed to be heard.

The opening of the film will not come as a major surprise. It focuses the camera on a fragile and disheartened looking woman sitting on a bus. She is struggling to hold together (if you can catch my drift) and she begins to form a pool of tears. You know right away that this is not one of those peachy-keen happy-go-lucky (not the film) films. This is the story of some person by the name of Karen. Look around you... you might even know someone you would say is just like her.

The entire experience feels like a portal into deep sadness and while that isn't exactly what an average movie-goer wants to hear about a potential movie ("Yeah... um, this was one of those films that will make you feel solemn and heart-wrenched inside"), and it doesn't help sell tickets to people, what it does do is create a honest look at a person who seems to be an outsider despite the fact that there are probably more Karen's in all of us than anyone would even like to admit. This is the kind of cinema intended for audiences determined to actually learn more about the human experience.

Karen (Angela Carrizosa) in the central character of this story. Karen feels lost in this world. She doesn't seem to know what her skills or talents are. She doesn't seem to have all of the necessary confidence required to make it by.  Yet she continues to try anyway. This may be the most fundamental thing to understand about Karen: That she sure as hell isn't a quitter and nothing is capable of stopping her from trying to live a better life. 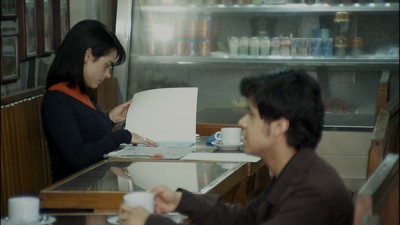 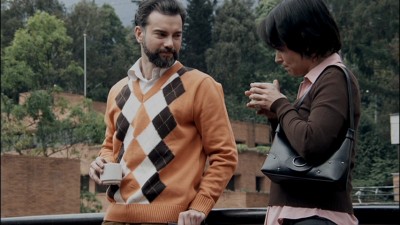 At the beginning of the story, it is clear that Karen is deeply unhappy with the life that she was living. It probably didn't help that she had an overbearing and unsympathetic husband named Mario (who demonstrates little genuine emotion towards the relationship). He never seems to emote much at all. Does he realize what made them become "couple material" in the first place? I can't claim to know, but I would imagine it wasn't a competition between his ego and his self.

Angela Carrizosa delivers an impressive debut film performance. She performs the role with flawless character-realization. Karen is a character who loses a lot of hope but still manages to find a way to keep a little left inside of her. To perform such a challenging role is difficult. That Carrizosa pulls it off is commendable. Likewise, the script and direction by a newcomer writer-director, Gabriel Rojas Vera, is something to celebrate. The authenticity of the film is refreshing.  It doesn't attempt to manipulate emotions but instead attempts to earn them in the proper filmmaking way. That is with pure expression. The script is well-balanced, strong performances added resonance, and the sleek cinematography accurately reflected the tone of the film.

As I addressed earlier... I didn't find the story essentially complex. It only takes a few small turns. But the script itself raises complex questions and addresses issues that are always a challenge for any filmmaker to attempt to work with. The story is attempting to discuss the importance of self-realization, self-growth, and empowerment. Karen Cries on the Bus is all about issues of human strength in times of dimmed light. The rareness of this kind of story is becoming all the more apparent each year and it is importance to recognize when a film attempts to make an audience feel intellectually and emotionally connected. It's even more necessary to appreciate the good ones. Karen Cries on the Bus is such a film. This is one of those movies made by thinkers for thinkers. That means you. 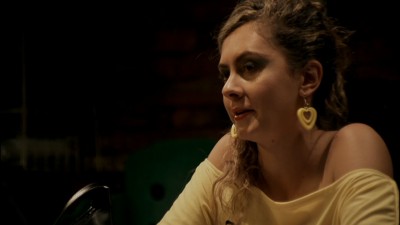 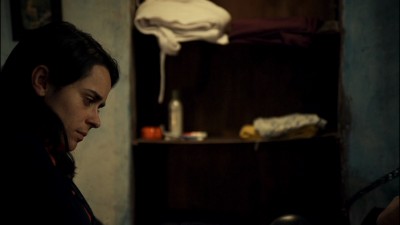 Film Movement has presented Karen Cries on the Bus with a 16:9 Anamorphic Widescreen enhanced transfer that will impressive on widescreen television displays. The 1.85:1 scope is representative of the original theatrical release. The best thing about this presentation is how it accurately reproduced the cinematography by Manuel Castaneda. The lighting is not always dark or overcast but it frequently is. It adds a layer to the story as the DP work did efficiently add to the atmosphere the filmmaker was attempting to achieve. The colors are also well reproduced, and clarity is strong. The image is reasonably sharp and clean so it's going to look good on a nice display.

The audio presentation was somewhat underwhelming in comparison to the video. Both the 5.1 surround sound mix and 2.0 stereo mix are quiet and don't really create an enveloping feeling. The dialogue is easy to understand but that is the only real upside. The music and surround activity is pretty minimalistic to the point of not being that noticeable and it just feels a tad too flat and uninvolved. I understand that this was undoubtedly helpful for the film to become even better in some scenes but it also didn't make much sense in others... such as when Karen is outside on a busy street or hanging out with a friend in a bar. Too minimalistic.  Karen Cries on the Bus is presented in Spanish with English subtitles. Those interested in learning about the subtitles will be pleased to know that they have been well reproduced and are easy to read.

Film Movement continues to include a monthly short film. The selection on this release is: Lessons from the Night. It's a short documentary about a cleaning person and how she is actively engaged in cleaning up the messes that people don't even realize they make. It's nothing extraordinary as the run-time is too short to go that in depth. It does cover some nice ground though for something made with such brevity. The director Adrian Francis did something interesting in capturing these moments, and from the unique perspective given by a person sadly undervalued too much of the time. Most of us don't spend as much time thinking about the people who help make our day-to-day lives work as much as we should. 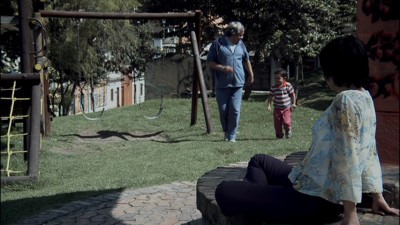 Karen Cries on the Bus is a wonderful story filled with hope and wisdom about humanity. It doesn't have the most complicated of storylines nor does it feature the flashy elements that most film fans become at least somewhat accustomed to seeing (even independent dramas feature these elements) but the emphasis on character development and the realities of the drama make it a thoughtful and worthwhile creation. It marks an impressive debut by writer/director Gabriel Rojas Vera and has an excellent leading performance by Angela Carrizosa.