Piano in a Factory, The 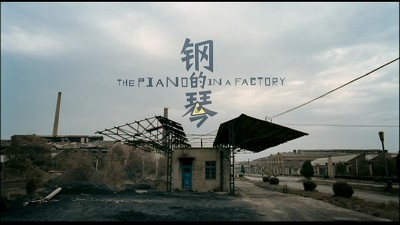 The Piano in a Factory should have been a delightful and quirky film which fans of offbeat comedies could enjoy. It's all too unfortunate then that the actual film seems somewhat baffling in its construction and far too underwhelming in its sense of humor and storytelling abilities. Even the primarily dramatic undercurrent of the story seems poorly designed by nature. Originally released theatrically in China in 2010, the writer-director debut by Zhang Meng is a decidedly mixed effort.

The setup is beautifully simplistic but humbly human in the most genuine way imaginable. It focuses on the story of a father named Chen (Wang Qian-Yuan), who is determined to find a way to bring his only daughter happiness by getting her a piano. Trouble ensues for Chen as he is served with the very real circumstance of getting a divorce from his wife and a custody battle ensues between the two. The daughter will only stay with the parent who can provide her a piano that can be used to express and grow her musical talents and abilities.

Chen demonstrates the utmost desire to raise his daughter. In a desperate attempt early in the film a piano is "built" using paint and wood. It won't play music but he attempts to show his daughter how she could still use it by "imaging" the sounds of the keys in her head while "playing". This doesn't go over with his daughter too well.

As the story progresses, Chen eventually begins to enlist the help of several others to work towards the creation of an actual piano. With no experience in the field and only the help of some good-hearted friends willing to take up his relatively small payment offers the task is set and the goal determined to be met. Chen might not have a lot of money, but he makes up for it with his love and compassion towards his child. He is determined to help her reach the destination of her musical dream. Things begin to head in a positive direction when the task is brought to a forefront when construction of a piano begins at a steel factory. Hence, both the title of the film and the realization of the premise are found. 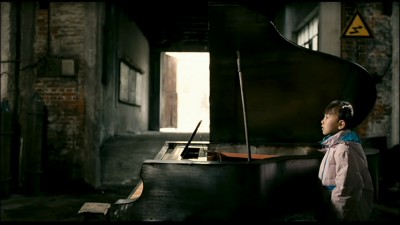 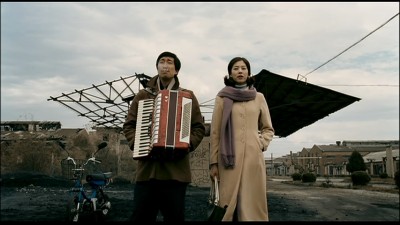 The performances were underwhelming. It was one of the greatest faults of the production. These characters surely sounded fascinating on page but were also undoubtedly difficult to translate into realistic characters. The performance by Wang Qian-Yuan reportedly won the Best Actor Award from the Tokyo International Film Festival. This seems baffling to me. It's such a downplayed performance that there is little emotion felt through his actions or words and it left me feeling a little cold towards the film. The character does feel believable, just in a way that differs from what it seemed the film had intended. Instead of empathizing for the plight of Chen I was left wondering why he seemed so determined to help his daughter if he was so lackadaisical about so much during the events in this story.  It certainly doesn't help that supporting roles feel largely inconsequential - more like background props than unique characters. There wasn't enough effort in the screenplay to develop the characters and the performances suffer as a result of this significant weakness.

The script and performances underwhelm... so where does the film find success? The Piano in a Factory finds positive elements largely in the impressive artistic direction by Zhang Meng and cinematographer Shu Chou. While Meng might have had difficulty bringing out the performances the story needed, he has a gifted understanding of film visuals that is wisely used to bring forth some imagery that elevates the entire production tenfold. The cinematography was also essential in the look and feel of the production. Chou used the right kind of atmospheric colors to convey the warmth and coldness of the characters or situations. These contributions should not be overlooked. Writer-Director Meng needs to improve in the screenwriting area the most but he certainly contributed a lot of heart in creating this kind of story even if the end result doesn't feel entirely successful. This is Meng's first feature and I expect to see some genuinely superb efforts from this writer-director with future efforts.

The premise of The Piano in a Factory was fascinating to me but the end result simply didn't manage to be as enjoyable as I had hoped. The film seemed a bit scattered in its ideas. The storyline seems fluid enough but there are few moments where the film feels engaged in its own ideas. The director, Zhang Meng, crafted a genuinely beautiful film in style but it is one that can't engage the full senses of emotions. The final product reminded me of the wooden piano crafted during the story itself: it was made with loving care and with great intentions, but the ability for The Piano in a Factory to strike a chord simply isn't there. 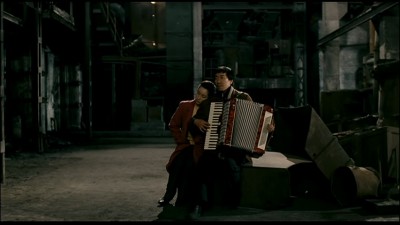 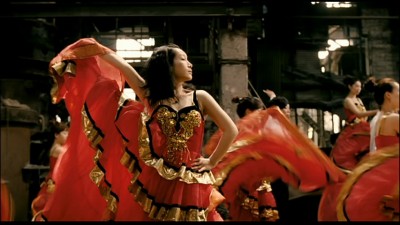 Distributor Film Movement presents The Piano in a Factory on DVD with a 16:9 anamorphic widescreen transfer preserving the original theatrical aspect ratio of 1.85:1. The image is clean and entirely presentable with decent enough color reproduction and no significantly noticeable issues. There is some softness in the picture but it is never a huge distraction. Most viewers will consider the presentation a generally satisfying one.

There aren't any neat bells and whistles to the audio on this release. The dynamics are somewhat poor and while the dialogue is easily heard there are few uses of sound that elevate sequences or moments in the story. The 2.0 audio-track preserves the original Mandarin language and includes English subtitles. 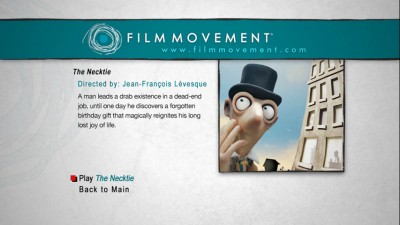 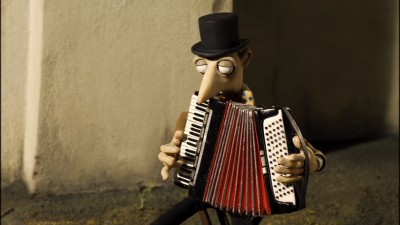 Film Movement continues its trend of including a monthly short film. This month's inclusion is The Necktie by director Jean-Francois Levesque. It's a brief twelve-minute-long short in stop-motion animation territory. The central focus is a depressed man rediscovering some happiness with a forgotten gift. It leads to him entering a strange fantastical journey of renewal and discovery that includes his remembrance of love for music. The inclusion is somewhat disappointing. Film Movement should have picked a different short. The only reason it was likely included here is because of both a direct and indirect association in music-related elements.

The Necktie received High Definition treatment on the Animation Express Blu-ray release (along with several other animated shorts) made available through Image Entertainment.

Film Movement also includes The Piano in a Factory bios and trailers for other releases. 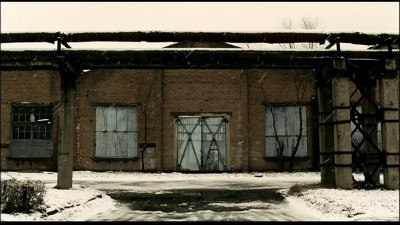 The Piano in a Factory isn't entirely successful in all of its many ambitions. The scripting was poor but the story was worthwhile. The direction was visually kinetic but the performances seemed dull. It does feature a pleasant score by Young-Mook Oh and the dry humor might appeal to some audience members but by the time the story concluded these characters remained underdeveloped and nothing was as satisfying as it could have been. Rent It.