Disney // G // August 9, 2011
List Price: $39.99 [Buy now and save at Amazon]
Review by Stuart Galbraith IV | posted August 29, 2011 | E-mail the Author
Disney's 24th animated feature, The Fox and the Hound (1981) is very much a transitional, passing of the torch work plagued with innumerable internal conflicts and other problems culminating in the walk-out of a dozen animators, led by Don Bluth, who then formed a rival animation studio. They had been honing their craft as disciples of the "Nine Old Men," Disney's core group of animators who had been with the company since the early days, but the conflict between the old guard, new generation, and poor management at the top all boiled to the surface just as production was getting underway. The walkout and other factors resulted in The Fox and the Hound missing its planned Christmas 1980 release, forcing it into the less-desirable summer of 1981.

Though financially successful, the company wasn't and isn't very proud of the movie that resulted. It's not part of their "Masterpiece Collection"/"Platinum Edition," DVD and Blu-ray releases that include early great works like Pinocchio and Dumbo, but which also include lesser later films like Aladdin (1992). You'll be hard-pressed to find Fox and the Hound coffee mugs, stuffed animals, or pencil sets at your local Disney store. Indeed, Disney would just as soon as like everyone to forget the four animated films made between The Rescuers (1977) and The Little Mermaid (1989), the others being The Black Cauldron (1985), The Great Mouse Detective (1986), and Oliver & Company (1988). You won't find any of those characters greeting visitors at Disneyland.

And yet The Fox and the Hound is at times very effective. Despite the turmoil surrounding its production the movie itself has a simple, beguiling charm. Obvious compromises in an effort to broaden its appeal damage it considerably, but a lot of it remains extremely effective.

The Fox and the Hound - 30th Anniversary Edition gets a fine high-def transfer but almost nothing in the way of new extra features. Given Disney's commendably honest behind-the-scenes featurettes on other Disney classics and this film's notoriety, the lack of substantive extras is particularly disappointing. (Accompanying DVD versions of the film, included in the set, are very brief making-of featurettes about both films.) What is included is a direct-to-video "midquel," The Fox and the Hound II (2006), a pointless but technically better-than-you'd-expect throwaway. 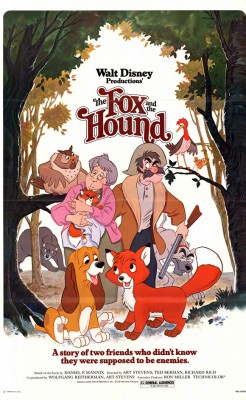 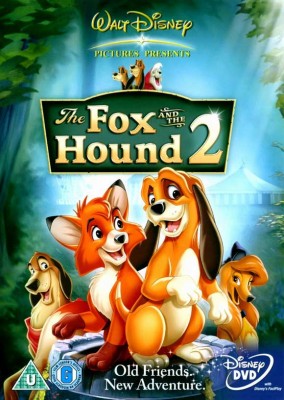 Apparently set in rural America around 1920, The Fox and the Hound opens as a baby red fox is suddenly orphaned when its mother is shot by hunters. A kindly owl, Bib Mama (voiced by Pearl Bailey), arranges to have the fox adopted by lonely old Widow Tweed (Jeanette Nolan), who pampers Tod (Keith Mitchell) like a puppy.

The movie was adapted from a critically lauded book of the same name by Daniel P. Mannix. The movie follows the its basic story, but its shatteringly realistic approach was almost completely jettisoned by Disney.

Nevertheless, it's clear that some at the studio, reportedly including one of the Nine Old Men, co-producer Wolfgang "Woolie" Reitherman, wanted to retain at least some of the original novel's grimness. Co-producer Art Stevens, another longtime veteran (though not one of the Nine), along with studio head Ron Miller, backed a more family-friendly approach, which won out.

(Spoilers) This conflict is most obvious in a scene where Chief chases Tod onto a railroad bridge, where Chief is hit by a train and his body bounces off several rocks before crashing into the river below. I was impressed that the filmmakers had the guts to kill him off ...until Chief inexplicably turns up later, nursing a broken leg but otherwise no worse for the wear. As one might suspect, Chief was supposed to die in the original script, but the filmmakers got cold feet and let him live instead.

Indeed, throughout The Fox and the Hound are signs of a much more daring movie trying to get out. Hunter Slade's truckload of fox and other animal pelts are shown, and Copper is depicted as an enthusiastic tracker but, not surprisingly, we never see the dog maul any animals and none are killed onscreen. Conversely, unlike Copper Tod's animal instincts never kick in at all. His diet seems to consist of nothing more than cow's milk. When he's seen raiding the hen house, it turns out to be a simple misunderstanding.

It never would have happened but one wishes the company had taken a chance and adapted the book more faithfully, marketing it to an audience of older children and younger teenagers, a market Disney pretty much chose to ignore following Walt's death in 1966. Even with all the changes and for all its marketing as a cutesy animal movie (note the cover art), The Fox and the Hound is far too scary for young children - I'm glad I didn't watch this with my four-year-old - and its themes are probably too complex and unsettling for small children to fully grasp. The opening scene, similar to the death of Bambi's mother, is traumatic enough, but a climactic fight pitting Tod and Copper against a ferocious bear ranks among the scariest scenes in the entire Disney canon. (It's also exceptionally well animated, chiefly by Glen Keane.)

Even the theme itself gets muddled. The filmmakers seem to want The Fox and the Hound to serve as a parable about intolerance, the tragedy of friendships torn apart by societal/innate/instinctive demands. And yet the movie ends more or less affirming that such friendships are impossible. Way to go, Disney.

Nevertheless, there's still just enough deviation from the rigid Disney formula to make The Fox and the Hound engrossingly off-kilter, and just enough of the original concept that drew Disney to the source material in the first place sneaks through and works its magic.

As for The Fox and the Hound II not much needs to be said. Part of a depressing line of unasked-for product (as opposed to "real" movies) that includes 101 Dalmatians II: Patch's London Adventure, The Little Mermaid II: Return to the Sea, and Pocahontas II: Journey to a New World, The Fox and the Hound II has no thematic connections to the original film whatsoever. It seems oblivious to the first film's attributes, working Tod and Copper into a story that plays like a bad Elvis movie.

At a county fair, Tod (Jonah Bobo) and Copper (Harrison Fahn) meet "The Singin' Strays," a band of singing dogs: Cash (Patrick Swayze), Dixie (Reba McEntire), Granny Rose (Vicki Lawrence), and twin brothers Floyd (Jim Cummings) and Waylon (also Cummings). The thin plot has Cash and Dixie getting into a big fight just as a talent scout from the Grand Old Opry is about to catch their act. Meanwhile Copper, enamored of showbiz, lies about his ownership status, claiming to be a stray in order to join the bad, threatening his best-pals relationship with Tod. Oh, dear.

Produced at a cost of $22 million (!), by direct-to-video standards The Fox and the Hound II does not look cheap. The animation is actually quite good, though stylistically quite different from the original film. (I particularly dislike the now-standard "more realistic" shading/shadow style of drawing that seems rooted in Who Framed Roger Rabbit.) The film also incorporates some computer animation, though most of it is unobtrusive.

I've read complaints elsewhere about The Fox and the Hound but I found the 1.66:1, all-region transfer to be excellent. There are shots here and there that are soft and even slightly out-of-focus, and the color scheme is more pastel than primary but those are inherent to the original camerawork and pictorial design, not any flaw with the transfer, which is strong throughout. The much newer Fox and the Hound II looks fine, as well it should. (It's 1.78:1 format.) Both pictures get 5.1 DTS-HD Master Audio remixes, though to the naked ear the earlier film almost sounds monophonic, while the sequel is robust and up to contemporary audio standards.

The only new supplement gets my vote as Worst Extra Feature of 2011: "Unlikely Friends," a seven-minute montage supposedly offering the kiddies a bit of education about improbable animal friendships, but which instead comes off as a tacky commercial for other Disney movies.

The sequel ain't much but the original The Fox and the Hound is an interesting if flawed Disney effort much better than its reputation would suggest, a film that wants to revisit still-fertile Bambi territory but which pulls back and makes too many compromises. But there are still many fine moments in The Fox and the Hound and for this reason it's Recommended.