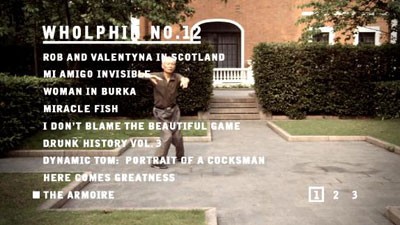 
The Story So Far...
Wholphin, part of the McSweeney's empire, releases a quarterly DVD magazine, which collects, as the subhead says, rare and unseen short films. The material ranges from old to recent and well-known to incredibly obscure, and as a result, the issues are an amazing gift for anyone open to unique entertainment. 11 issues have been released previously, and DVDTalk has reviews of all issues.

The Movies
Static No. 12, Ride No. 2, Pan No. 2 (5:24, 1:27, 4:41/Menu Films)
The three menu films this issue are part of a set of sorts, all directed by Australian Daniel Crooks. Utilizing time-lapse photography and some unique visual effects, he creates what I call "time scapes" of a location, fuzzing out the static elements and letting the moving pieces stand on their own. I'd suggest watching them in order, as the first, featuring a man doing tai chi, looks positively pedestrian at first, but becomes something brilliant, and the films, which are scored by droning electrical noises and what seems like recordings from those mysterious number stations out there, grow in their complexity and beauty. This might be too experimental for some, but the imagery is fantastic.

Rob and Valentyna in Scotland (22:54)
Eric Lynne's short film about two cousins who reconnect after many years, only to find themselves separated again (under much different circumstances) is such a comfortable, warm movie, one that slips on easily, like you've seen it many times, but want to check it out one more time. Part of it is the way the story unfolds, in an incredibly natural and real fashion, part of it is the insanely likable leads and part of it is the presence of the narrator, who makes the whole thing feel like a BBC special report. When the credits rolled, I was legitimately surprised. It had felt like it lasted just minutes, and the ending just made me want to see more. 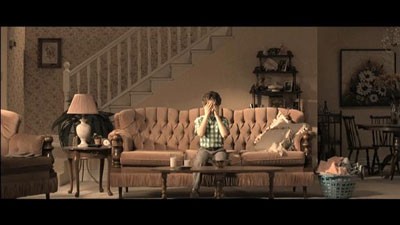 Mi Amigo Invisible (14:57)
It would be very easy to just label this film as a Spanish Napoleon Dynamite, but it's deeper than that, and certainly weirder. From the start of the film, the oddities just pile on, along with an insane array of '80s references and fantastic music, as the "hero," a fat mute in a shirt that says "The Little Pink Pig," struggling with crippling shyness. It would be nearly impossible to guess what happens, and mean to make mention of it, except to say the ending just didn't do the rest of the film justice. Until then, it's fun, bizarre stuff.

Woman in Burka (20:37)
Shot on low-tech video, lending the whole thing an air of authenticity, this movie is a rather sharp dig at how the entertainment industry deals with race and ethnicity, by following the poly-ethnic Sarita (Sarita Choudhury) as she tries to get a main role in the film Woman in Burka. The movie stars a host of recognizable faces playing themselves, further enhancing its authenticity, along with the ever-wonderful Sam Rockwell, as Sarita's ex. The ending drags a bit, stretching out an odd scene of...well, some sort of emotion, before hitting the last punchline. Well made and pointed in its jabs, it's a sad reminder that the general views of the film industry are pretty spot on.

Miracle Fish (17:45)
If I have learned anything from Australian films, it's that the life of an Australian child is pure hell. They are bullied and tortured on a continuous basis, apparently the legacy of a country founded from a penal colony. At least, that's all I tend to see from Australia when it comes to their entries in Wholphin. Miracle Fish is yet another entry in this genre, albeit an extremely well-made entry, using the idea of bullying as a jumping off point toward something truly fascinating. The funny thing is, I thought I knew exactly where it was going, but then there's a moment that I didn't expect in the least, and literally made my jaw drop open. This is a perfect example of the power of short films, which is why it was nominated for an Oscar back in 2009.

I Don't Blame the Beautiful Game (5:08)
Quick and dirty, this movie about a guy whose love from the game of soccer costs him nearly everything is another wonderful blending of thoughtful visuals with narration that carries the day, as the story told is enhanced by the subject kicking his way around an urban wasteland. It's a heartbreaking story, but for more reasons than the obvious ones.

Drunk History, Vol. 3 (6:14)
Yet another installment of Derek Waters' series of alcohol-fueled historical recreations, this time told by comedic writer Jen Kirkman, with Danny McBride playing George Washington (and Jason Ritter appearing as well.) The storyteller's drunken delivery is portrayed by the recreationists, adding a layer of amusement to the historically inaccurate proceedings, but overall. it's a tad too slow and lacks laughs. A rare Wholphin disappointment.

Dynamic Tom: Portrait of a Cocksman (18:27)
When this short begins, it is easy to turn on Tom, an older man who claims to have bedded hundreds of women in his life. The film combines footage of him trying to work his charm on a number of women, with an interview with him where he opens up on a more serious level. But as you spend more time with him, it becomes clear he's just honest about what he's looking for, and has made his peace (for the most part) with what his tail-chasing has cost him in life. From there, it's entirely up to the viewer how you take him, though your reviewer, who is married with a daughter, couldn't help but see it as sad.

Here Comes Greatness (21:22)
Did I say the last film was sad? Spoke too soon. This movie about the once-hot world of extreme backyard wrestling, set in Southern California in the late '90s, presented in a new edit for Wholphin. It's incredible to see these people take such a stupid idea, risking their lives in their backyards pretending to be professional wrestlers, so seriously. It's really quite sickening to see these people bleed, get caught up in barb wire and bodyslammed onto piles of thumbtacks, but it's not as sick as watching the "fans" carry an unconscious, heavily-injured wrestler to the hospital, while making sure to capture it all on tape. I was going to question what these misfits are doing today, over 10 years later, but the many Insane Clown Posse T-shirts answer that question neatly. Overall, a disturbing film, but like a car wreck, it's hard to look away.

The Armoire (22:01)
What an intense, gorgeous, inventive movie. It's just perfect. I've only felt this way a few times when seeing a film, and this movie told me that when director Jamie Travis makes a feature film, I expect to be blown away, and for him to craft a film that will have the impact of a Paul Thomas Anderson or Wes Anderson. You cannot consider yourself a film fan if you have not seen this film. It's simply stunning. 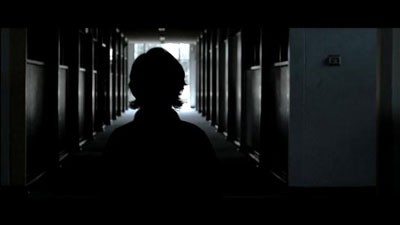 The DVD
Wholphin No. 12 maintains the consistent packaging of the series, with the same cleanly-designed digipak as the other issues, with a tray on the left side and a 40-page booklet glued into the right inside panel, while a content breakdown is found on the back cover. The disc features animated menus (anamorphic widescreen) with a list of content, though it's not just an animated menu. What's in the background is the beginning of one of three menu shorts, which will play if you don't choose a film to watch. There are no audio options, no subtitles and no closed captioning.

The Quality
This disc brings with it the usual mixed bag of visual quality, with the source film's quality being the sole factor affecting the presentation. All but one film (Here Comes Greatness) is presented in anamorphic widescreen though, and when things are humming, like on The Armoire or Miracle Fish, the disc looks fantastic, a point pushed further by Dynamic Tom, as half the film is presented in a grainy, consumer-quality video, and half in beautifully sharp high-quality footage. There are no obvious issues with dirt or damage, nor are digital artifacts an issue.

Like the previous releases, the audio is delivered in Dolby Digital 2.0 tracks across the board, which sound fine, but one wonders if there are better sound tracks available than what's presented here.

The Extras
As usual, there are no extras on the disc, but you do get another excellent booklet kicked off by editor Brent Hoff. These interviews, statements and such are invaluable when approaching some of these pieces for the first time, or as supplements once you're done. 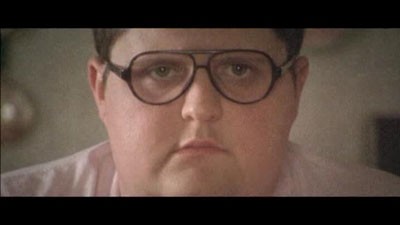 The Bottom Line
Watching the episode of Drunk History on this DVD was a definite let down, considering the quality of the previous 11 issues, but it's as if the Wholphin folks knew it was a disappointment, and loaded the disc with two of the best movies it's presented to date in Miracle Fish and The Armoire, along with even more wonderful cinema. Bless Wholphin for being the defenders of the faith in a blockbuster world.