Image // PG-13 // August 16, 2011
List Price: $17.97 [Buy now and save at Amazon]
Review by Stuart Galbraith IV | posted August 25, 2011 | E-mail the Author
A 1980s comedy that's as much a throwback to the kind of thing comedy teams were doing way back in the '30s and '40s, Armed and Dangerous (1986) stars John Candy and Eugene Levy as hapless private security guards. The project was long in gestation, having first been conceived for Dan Aykroyd and John Belushi before the latter's death in 1982. When Candy was signed, Tom Hanks was the original choice to play Levy's part - an intriguing notion considering that his love interest is played by a very young Meg Ryan, Hanks's later occasional co-star.

Armed and Dangerous isn't much of a movie, sorry to say. It's strictly by the numbers and doesn't tap Candy's and Levy's considerable talents in the right ways. But it's also harmless comfort food comedy with a couple of decent if fleeting laughs.

Sony/Columbia Pictures obviously didn't think much of it either, having licensed it to Image Entertainment for this Region "A" Blu-ray release. The picture is bright and sunny and the uncompressed PCM Stereo surprisingly good for a mid-'80s comedy. No extras. 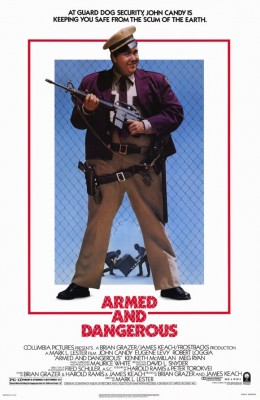 The slim plot for this 88-minute feature has wrongly-disgraced LAPD office Frank Dooley (Candy) and incompetent defense attorney Norman Kane (Levy) forced out of their prestigious jobs and into lowly minimum-wage ones, working as partners for Guard Dog Security, a firm owned by Clarence O'Connell (Kenneth McMillan).

Initially, the film hints at something a bit more socially relevant. Safety training is so minimal and perfunctory as to be almost criminally negligent. The men are paid peanuts putting their lives at risk on a daily basis yet are also vulnerable to in-house fines and ruinous lawsuits when they screw up, while their meager earnings are further milked by crooked union reps.

To say Armed and Dangerous is like an old Abbott & Costello movie would be overstating things. It's not even that slick or funny, but rather closer to the less-than-inspired hijinks of Brown & Carney. Myopic Hollywood rarely viewed Candy in anything other than "fat clown" terms. Armed and Dangerous barely taps his unique appeal, especially Candy's knack at playing unapologetically vulgar types that were sometimes inwardly sensitive (as in two of his best films, Planes, Trains, and Automobiles and Uncle Buck). The writers here aren't consistent with his character, Frank, who is confident and good at his job some of the time, and thus a role model for Levy's Norman, while childlike and inept in other scenes.

Co-produced and co-written by actor James Keach (his father, Stacy Sr. has a small part as a judge), Armed and Dangerous may have been heavily tinkered with during postproduction, at least judging by the strange, schizophrenic climax, which for no clear reason has Frank riding to the rescue atop a classic motorcycle and in full period gear, then later catching a ride with an enthusiastic trucker billed as "The Cowboy" (Steve Railsback*), who crashes his big semi through a massive traffic jam over the L.A. River. The scene makes no sense: Why does Frank ask for rides from drivers trapped in the middle of the gridlock rather than beyond it? Railsback's wild ride might have looked good on the coming attractions trailer, but this action set-piece seems completely pointless and out of place.

Candy and Levy are enjoyable anyway, despite playing conventional comedy characters. The film briefly comes to life in a scene reminiscent of their glory days on SCTV, when they disguise themselves in order to elude the bad guys - Levy as a leather-clad male hustler and Candy in outrageous, Divine-like drag.

Shot for 1.85:1 projection, the 1080p Armed and Dangerous looks pretty good for its age and for a fobbed-off release. The image here is sharp and bright, and the uncompressed PCM Stereo robust both in terms of its sound effects track and underscoring. Optional English SDH and Spanish subtitles are included. No Extra Features.

Unmemorable but inoffensive, Armed and Dangerous has "rainy day rental" written all over it. There are some laughs, but not many. Rent It.

* The movie opens with Levy's attorney defending a Charles Manson-type mass murderer complete with a swastika carved into his forehead. Railsback first came into prominence playing Manson in the TV miniseries of Helter Skelter. I wonder what he made of this?