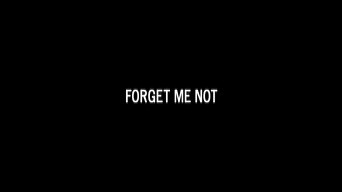 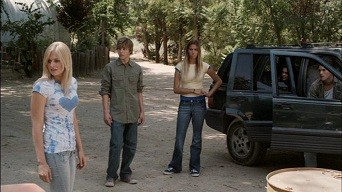 It's so easy to become jaded if you watch a lot of low budget horror, either as a fan or as a critic (or both, in my case). There is just so much of it, with a week that doesn't go by without several micro-budget productions flung out onto DVD shelves, NetFlix queues, RedBox kiosks, and SyFy's weekend schedules. And a large percentage of it, let's be honest, is highly derivative and hardly memorable. There are, however, always those diamonds in the rough: films that either work very well or offer something slightly different or unusual.

Forget Me Not, just released on DVD by Phase 4 Films, falls in the latter camp. While it essentially follows slasher film tropes with a supernatural twist (think the original Prom Night or I Know What You Did Last Summer mixed with The Ring for added flavor and kick), the screenplay - credited to director Tyler Oliver and co-producer Jamieson Stern - has a very clever premise that keeps this otherwise routine run-around tasting fresh and energetic. I couldn't help but think that if this script had some more polish (dumping the first 15 or so minutes of its teen cast partying and lounging about) and money, Forget Me Not could have been a novel theatrically-released teen fright flick in the PG-13 mode that would have done well at the box office. And I mean that as a compliment. 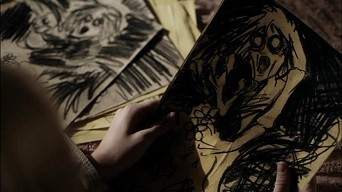 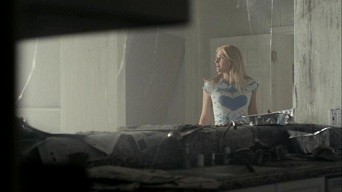 Forget Me Not is set up as a traditional teen slasher film with many of the usual hallmarks, which were perhaps best delineated in the Adam Rockoff book Going To Pieces. It's got a good-looking cast of teenagers living in a world where parents and authority figures provide little guidance or help. It takes place during a significant milestone or holiday: high school graduation in this case (like I Know What You Did Last Summer, Graduation Day, etc.). The kids do a lot of partying, smoking, and sleeping around, which always equals death in these movies. Been there, done that.

Yet, Forget Me Not wraps these conventions up with a clever concept. The Final Girl here (played ably enough by Carly Schroeder sporting a cool blue-hearted tie-dye shirt) is the only character who remembers her friends as they're killed off one by one by a sinister specter after they unwisely and drunkenly play a moonlit game at a graveyard. In other words, her friends literally disappear from existence - all evidence that they ever existed vanish. This leaves Sandy, the Final Girl, increasingly alarmed and bewildered as her ever-shrinking circle of friends, now with no memory of the victims, thinks she's gone off the deep end. An additional intriguing conceit has the film's insidious ghost being joined by the ghosts of her victims as they menace the remaining characters.

Once the action of this film kicks in, Forget Me Not becomes surprisingly entertaining. Horror fans will appreciate the kills, accomplished in unusual circumstances reminiscent of the Final Destination series. I appreciated the mystery about the origins of this ghost, clues of which are teased effectively in the flashback prologue and throughout the narrative itself. And while the characters are introduced in a banal manner, they do evolve likeably as the film progresses. It helps that the cast aren't bad in their roles. In addition, old-timers like me will notice Space: 1999's Barbara Bain in an important supporting role. Bain, now in her 80s, seems to still keep active in productions like this and Haunted Echoes. Good for her.

All in all, I want to commend filmmakers Tyler Oliver and Jamieson Stern for coming up with an original take on the exhaustively imitated slasher and vengeful ghost genres. I'd be interested in seeing future horror films from either of them. Forget Me Not is far from perfect, but once its abysmal opening is over, the movie offers some good scares and an interesting mystery. I also rather liked the ending, even if (or perhaps because) it doesn't offer answers for everything. Recommended. 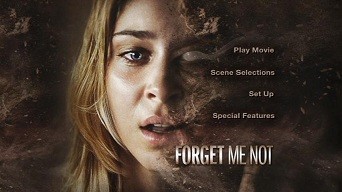 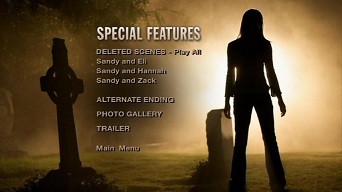 Phase 4 Films provides Forget Me Not an anamorphic widescreen presentation with a 1.78:1 aspect ratio. Details are surprisingly sharp and colors are solid - for a low budget film, Forget Me Not looks like a studio effort in this department.

Two audio choices are given here: English 5.1 Surround Sound and English 2.0 Stereo. The former appears to be the default and the mix is quite dynamic, with strong surround sound effects and clear dialogue.

Neither subtitle nor foreign language options are available.

Trailers for Terror Trap, Scar, Killer Movie, and Midnight Movie precede the main menu. They're not accessible via the menu system, though a separate trailer for Forget Me Not itself is.

Movie-specific extras include a brief Photo Gallery (2:02) providing a slideshow of stills from the film set to a rock song used in the soundtrack, three Deleted Scenes (2:20 total), and an Alternate Ending (2:39), which is more of a fleshed out version of the film's ending rather than an alternate. For the record, I think the filmmakers made the right call between the two.

It's too bad there isn't a commentary track here - I would have liked to have heard Oliver and Stern provide some background on their work.

Forget Me Not isn't perfect, but it's worth sticking out a bad beginning. Once filmmakers Tyler Oliver and Jamieson Stern get their story rolling, they offer a surprisingly original take on standard slasher film and vengeful ghost tropes. Forget Me Not's intrigue is enough to make a viewer wish Phase 4 Film's DVD release had more significant extras, which is a compliment to the film itself. Recommended.