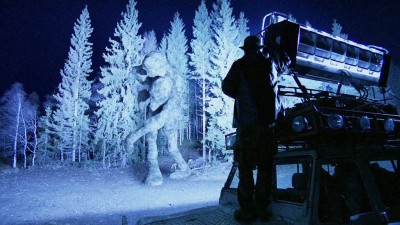 "Trollhunter" exists somewhere between "The Blair Witch Project" and a particularly edgy Rankin/Bass holiday special. It's a crafty motion picture with ingenious visual effects and a healthy sense of humor, but it overstays its welcome, looking to stretch a thin concept to an unsteady feature length running time, losing its fresh appeal and sensation of surprise in the process.

Thomas (Glenn Erland Tosterud) and Johanna (Johanna Morck) are two college students setting out to investigate troubling evidence of bear poaching, using their leads to uncover the truth and make a name for themselves. Their tips and research lead the amateur journalists to the enigmatic Hans (Otto Jespersen), a gruff man who soon reveals himself to be a hunter of trolls, working for a covert Norwegian organization established to control the exploding monster population. Accepting the students as observers, Hans and his frightened passengers head deep into the corners of the country, encountering all types of mountain and land trolls. While thrilled with their footage, the journey is fraught with threat for the documentarians, with the trolls not half as diabolical as those who want to keep the hunt secret. 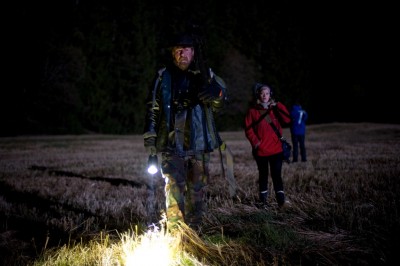 "Trollhunter" is a member of the found footage genre, with an unknown organization assembling a movie out of the hundreds of hours of footage left behind by Thomas and Johanna. The concept is tuckered out, but director Andre Ovredal has a few tricks planted up his sleeve that introduces some needed playfulness and unexpected wow to the picture.

Using a herky-jerky documentary aesthetic, Ovredal summons a mood of reality to backdrop his fantasy elements, creating his own troll mythology that finds the creatures with a severe distaste for Christianity (believer blood drives them crazy) and a vulnerability to harsh UV rays, which Hans deploys to either freeze or explode his prey. Thankfully, Overedal isn't reluctant to show off his creatures, though we see the monsters only through quaky camerawork or under the cover of night, dialing down the chaotic potential of the premise, preferring to observe with excitement than lurch ahead with elaborate escape sequences. The trolls are creatively designed and executed, making for a few thrilling encounters that retain a sharp sense of jeopardy, presenting the documentarians in clearly over their head while Hans prepares for battle against his old foe. 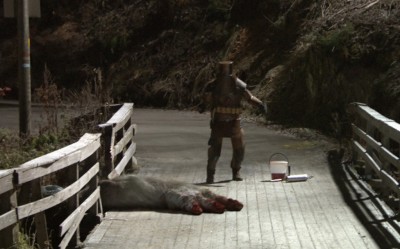 Ovredal is unable to sustain the pace of the picture past the hour mark, with a few extended expositional encounters feeling more like padding than essential storytelling. However, in the director's favor is the magnificent Norwegian countryside, with ominous forests and snow-blanketed mountains forming a beautiful battlefield, gifting the film an evocative sense of environment to go along with its gritty display of darkly comic fantasy.

A few flaws keep "Trollhunter" from realizing greatness, but it's a spry enough to slog through a few sluggish spells, and the eye candy here can't be beat. If there's a film ripe for an American remake, it's this one, offering a clever director a chance to generate some demented fun. Anyone know what Terry Gilliam has been up to lately?