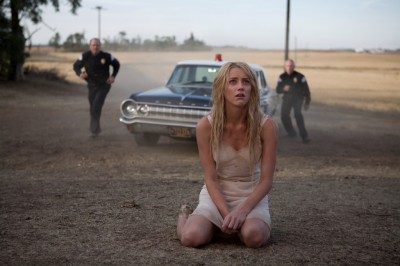 It's been a decade since director John Carpenter released a feature-length motion picture (2001's "Ghosts of Mars"), and frankly, I've missed the guy. Sure, his output hasn't been consistent since the 1980s, but I'll take a Carpenter misfire over the latest music video trainee looking to make their mark with a sloppy showing of shock value. "The Ward" feels a little weightless for the filmmaker, but it's a mildly entertaining effort, just nowhere near exceptional.

Sent to the North Bend Psychiatric Hospital after a violent episode, Kristen (Amber Heard) is confused and fearful, aiming to blend in with her fellow inmates (including Mamie Gummer, Danielle Panabaker, Lyndsy Fonseca, and Laura Leigh) while planning her escape. Discovering an evil apparition in the hospital, Kristen is freaked, fighting to keep herself safe while Dr. Stringer (Jared Harris) seeks to cure her through various forms of therapy. Investigating the strange happenings, Kristen discovers clues left behind by previous patients, providing her with a faint outline of the demon that stalks the ward. 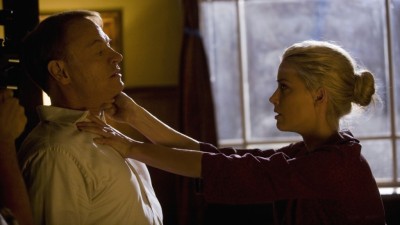 Written by Michael and Shawn Rasmussen, "The Ward" is a rather anemic fright film, stretching out a story that seems more suited for a "Tales from the Crypt" episode, halfheartedly working tropes in the "institutionalized girls" genre. At the core of the script resides a ghost story, though the script never amplifies the phantom menace as hoped, keeping Kristen in investigative mode as she seeks out evidence pertaining to a missing patient named Alice.

Staying low to the ground suits Carpenter, dusting off his widescreen stalk for this latest picture. Though it features the persistent presence of a rotting ghoul who terrorizes the women, "The Ward" isn't consumed with pumping nightmare fuel. Instead, the picture is more of a whodunit, taking its time with discovery and paranoia to build a case of doubt against Kristen, who gradually comes to understand that her fellow patients are well aware of Alice, while the staff can only feign a feeble dismissal of her claims. It's a lower-budgeted film for Carpenter, who sticks to the confines of the hospital, eschewing a grand effort of style to build a rudimentary mystery, one that's only occasionally interrupted by the wicked business of the undead. It's a workmanlike effort from the filmmaker, but it's a solidly built picture, satisfactorily photographed and edited. There's just no spark to the proceedings, with Carpenter failing to enliven the Rasmussens' snoozy script. 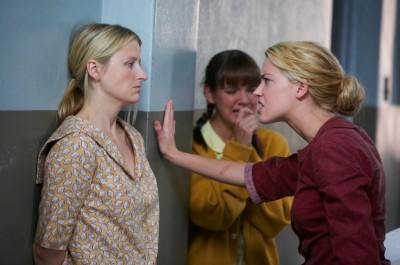 The question of what's stalking Kristen is sustained throughout the film, allowing for snappy escape attempt sequences and a few pauses to assess the psychological stamina of the women. The answer the picture provides is sure to divide audiences, while upsetting passionate film fans who've witness this resolution on more than a few occasions. Frankly, the flaccid conclusion fits the wilted integrity of the overall feature, which plays as though Carpenter was missing one of his batteries, lacking the drive to conjure some incredible beats of suspense. "The Ward" is deeply flawed, but not a total loss. Carpenter feels rusty on this one, but I'm thrilled to see him behind the camera again, hopefully working his way back to his previous glory.