In 1995, after years in supporting roles and working his way to fame on "Saturday Night Live," Adam Sandler was ready for his own starring vehicle. His first offering, "Billy Madison," is many things, often labeled crude, dopey, and obnoxious -- all true. However, the feature is also 100% Sandler, boldly unleashing his specialized sense of humor in a high concept comedy that proudly marches to its own beat. It's easy to dismiss the picture as unsophisticated twaddle, but doing so misses the point of Sandler's unique grasp on goofballery, with "Billy Madison" gifting the future superstar his first open field to run around and get dizzy within.

The heir to a lucrative hotel company, twentysomething Billy Madison (Adam Sandler) has pissed away his future by taking the easy road, reveling in his lazy, spoiled behavior, much to chagrin of his father (Darren McGavin). When unscrupulous associate Eric (Bradley Whitford) makes a play for control of the company, Billy protests, promising his father he'll clean up his act and return to school to acquire a proper education. Spending two weeks in each grade, Billy revisits his educational hell, finding comfort with his new, much younger classmates and crushing out on his elementary school teacher, Ms. Vaughn (Bridgette Wilson). 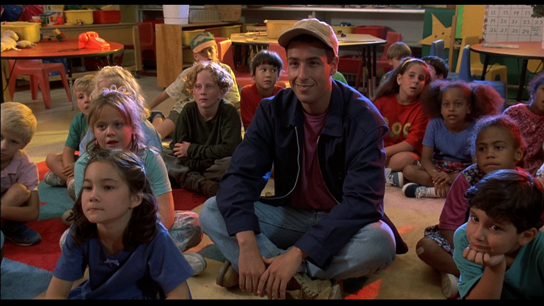 I'm about to write some very kind words about "Billy Madison," but it's coming from a pure place of reaction. This film makes me laugh. It's not a classically scripted comedy nor technically proficient -- I'm not about to compare the picture to diamonds like "Some Like it Hot" or "Lost in America." "Billy Madison" is dumb guy entertainment, and it's awfully agreeable dumb guy entertainment, deploying Sandler's weirdo ways with a full commitment to absurdity, a trait that would define the comedian's success until the syrup was tapped in 2006's "Click."

Stay cool, dear readers, I'm not lobbying the AFI here. I just want to share some love for a screwy gut-buster that offers something few comedies bother to establish: a fingerprint. 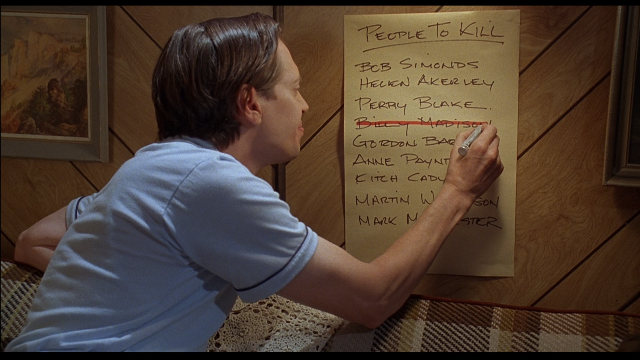 Sandler and his partner-in-crime, screenwriter Tim Herlihy, have a Jedi way with silliness that elevates "Billy Madison" from its gimmicky origins, with the duo fixated on bizarre antics that help to alleviate the crushing simplicity of the plot. There's no real storytelling going on here, the movie is more of a collection of oddball behavior and random impulses funneled into a PG-13 mainstream comedy. It's one thing to watch Billy, the quintessential idiot, relive his academic career, reintroduced to childhood responsibility he never quite outgrew, forced to achieve an education and rewire his moron ways to display responsibility, desperate to impress his father. "Billy Madison" contains the basics, but it's more insistent with mischief. Billy doesn't just have a maid (a charming Theresa Merritt), he has a full-figure grandmother with obvious (and playful) sexual designs on her young charge. Billy doesn't merely encounter a blast of redemption to push the film into a third-act showdown, instead he commences a brief musical number to explore his newfound determination and need for gum. And when Billy drinks? Well, there's a manifestation of man-sized penguin there, whose very presence torments the man-child.

The movie is overflowing with peculiarities and throwaway gags. Sandler and Herlihy are eager to stuff material anywhere they can find room for it, providing a bounty of silliness to everyone on the cast, including a grand cameo by Chris Farley, here playing a tightly wound bus driver and deliverer of banana peel doom. The list of oddity here is endless, from Steve Buscemi as a lipstick-wearing outcast Billy used to bully in high school to a moment of assumed clown death. It's all very ridiculous, but executed in such a gleeful, freewheeling manner, constructing a thrilling sensation of madness that sustains unpredictability and offers Sandler is own inimitable take on big screen funny business. 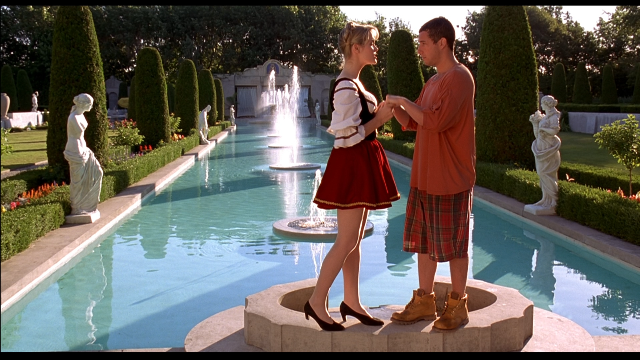 The VC-1 encoded image (1.85:1 aspect ratio) presentation hasn't been overhauled for its Blu-ray debut. The 16-year-old film looks a little rough here, with print damage and inconsistent clarity, while also serving up crushed blacks and dismal skintones. What's most impressive here are the colors, which offer a tremendous punch, remaining stable and lush throughout. Hues off costumes and elementary school interiors are excellent. Detail is also moderately exciting, best with party exteriors.

The 5.1 DTS-HD sound mix is a fairly thin representation of the motion picture, sounding shrill at times, especially with dialogue exchanges, which fail to carry necessary weight. Scoring cues are anxious, rarely stepping on the action, but they sustain a thin quality that creates chirpy noise in place of musical indication. Soundtrack cuts sound a little better, bringing some low-end to the track. Atmospherics are engaging, with ambient noises and schoolyard voices showing life in the surrounds. A French track is also included. 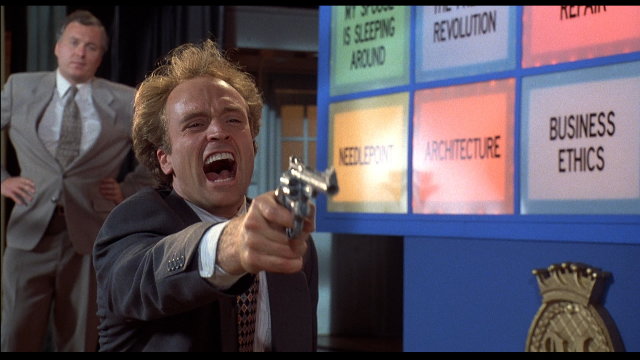 Ported over from the previous DVD release...

The feature-length audio commentary with director Tamara Davis is more friendly than illuminating, spending time with a director who was hastily brought on to the picture four days into production, thus cutting short her history with the material and Sandler. Davis is a nice woman, and she makes a game attempt to share backstage anecdotes, but the filmmaker wasn't really around during critical moments of creativity, leaving her comments lacking in authority. Even she's baffled by the jokes here. It's a gentle conversation, but rarely riveting.

"Deleted Scenes" (32:55) basically consist of further Billy adventures, interacting with his friends (including more screen time for Norm Macdonald), his enemies, and the help. Interestingly, most of these scenes take place outside of school, including a major kickball sequence where Billy and the staff do battle on the diamond.

"Outtakes" (3:43) are a standard run of mix-em-ups, covering blown lines and giggle fits. It is amusing to see Sandler essentially co-directing the kids here, hoping to land the perfect reaction. 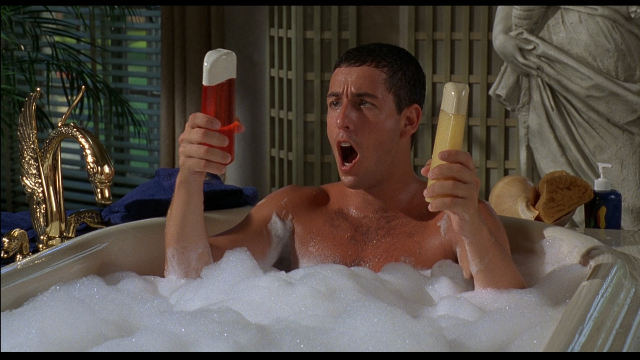 Sandler would build a more comfortable nest for his sense of humor with 1996's "Happy Gilmore" and hit pay dirt with 1998's "The Wedding Singer," but "Billy Madison" was a victorious launch, establishing the gibberish-speaking comedian as a force of nature unwilling to play by the rules. Sandler went on to create an enormous career for himself, with box office fortunes solidified when he turned his focus to playing dads and boyfriends. However, it's refreshing to revisit the jester in his screen infancy, when all he wanted was to boogie to a Culture Club hit, carry on conversations with hair care products, and sit on a sprinkler. "Billy Madison" may turn your brain to mush, but there are sustained laughs all the way to the end credits. 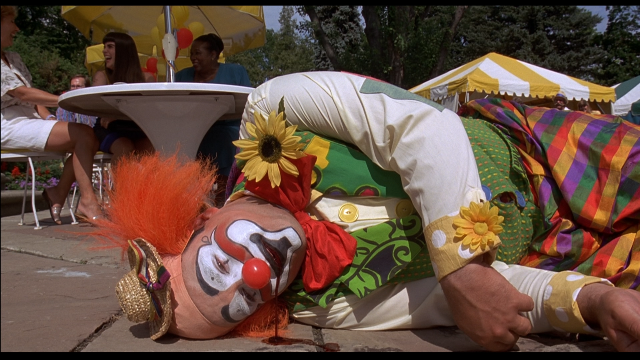