Sometimes simplicity is the toughest form of art to review and the short films of Kanji Nakamura are incredibly simplistic in execution, almost to a fault. Nakamura, who recently made his feature length debut with the philosophical sci-fi film "The Clone Returns Home" showed fearlessness in filmmaking with his 1994 short "Fe" (referring to the elemental symbol for iron) and the 2003 short "The Box." Both films collected on this disc share similar themes and establish a visual style that Nakamura would take to near masterpiece levels in "The Clone Returns Home." However, "The Box" and "Fe" may not share the same audience and are likely to leave most viewers scratching their heads in frustration.


Had both films not been included in the same package, the shared themes and plot devices in both would not have shed any light on Nakamura's individual intent. Even with the luxury of watching both in short succession, "Fe" and "The Box" suffer from what are likely cultural and possibly religious differences, forever shrouding their deepest fruits from most viewers. In each film an elderly male figure at the end of his life reflects verbally or through actions on the state of his surroundings and nature in general. In "Fe" it's a painter, capturing the dying landscape and telling his tale to a young girl, all the while cold iron structures and scraps begin to litter the countryside: the natural world is falling prey to industrialization. In "The Box" an older scientist constructs a mysterious box that through unexplained mechanisms travels through a village plucked from time along one of the most obvious signs of the modern world: train tracks. While these basic mechanisms for story advancement and set-up are mostly clear, what Nakamura ultimately intends each story to mean isn't. 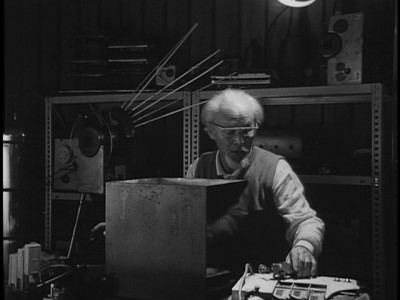 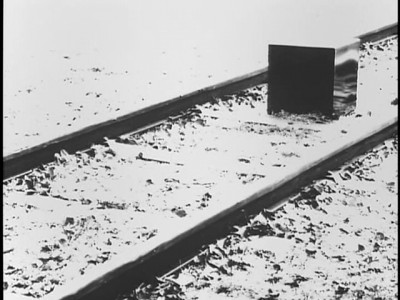 "Fe" is the most clear, with the melancholy loss of both human life and the natural beauty looming on the horizon. Yet, in 67 minutes Nakamura seems to run out of steam, hammering ideas over, eventually jettisoning most dialogue for a visually intense but slowly paced experience. There are hints of spirituality that I just don't lack the background to understand and in turn, "Fe" alienates me as a viewer. What is left to cling to is Nakamura's visual eye which remains consistent, with the writer/director also handling cinematography, editing and musical duties. It's a true piece of art by an artist, but a work of art that will find a limited audience and even then not fully distinguish itself from more accomplished creators.


"The Box" features a very sparse narrative and while not nearly as visually eye-catching as "Fe" has an ethereal quality that makes it compelling even as the story becomes a series of denser and denser metaphors. Nakamura employs an almost Lynchian approach to filmmaking, with the everyday occurrences in this quiet Japanese village intruded upon by the unsettling titular plot device. The Box feels at times equal-parts MacGuffin and main character, never truly revealing it's ultimate purpose until the film's surrealistic final act, but in hindsight leading viewers' minds down a few false conclusions. Like "Fe" there's a spiritual element in "The Box" lost on me and while I was far more captivated by Nakamura's second work of art, at 65 minutes it borders on self-indulgent. 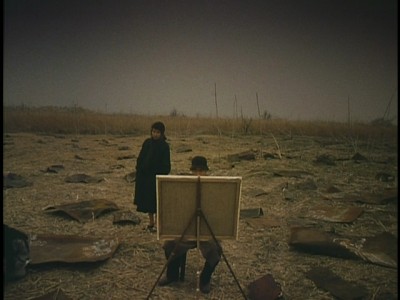 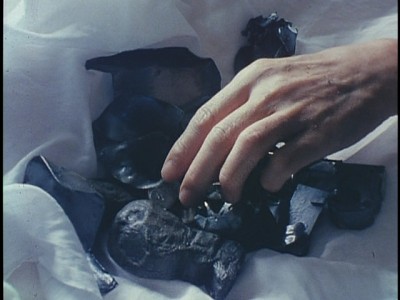 
Both films are presented with a 1.33:1 original aspect ratio transfer. "The Box" despite being the more recently made film features a black-and-white transfer with contrast levels all over the board. Artistic or not, it's a displeasing experience and for such a visual and metaphorical film, makes it hard to enjoy the nearly dialogue free experience. "The Box" also suffers from average at best detail and an occasionally noisy image. "Fe" is a muddy looking color transfer with consistent print damage ranging from the mild to the severe as well as average detail, making the 1994 film look at least 20 years older.


Both films are presented with a Dolby Digital Japanese stereo audio track. Despite the two films being made over a decade apart, there is an audible hiss with the occasional crackles to the audio. Both tracks have a hollow sound to them, with "Fe" suffering from high-end distortion on a regular basis. The only point where the audio shows an effort to impress is when the musical score kicks in sporadically and even then, the reproduction is flat. Overall both tracks are equally disappointing. English subtitles for both are included.


The film's trailer's and a biography of the director are the only extras.

While justifiably branded works of art, "Fe" and "The Box" are a tad too long, a little too simple and in general, inaccessible as standalone films. Taken as a double feature they reveal Nakamura's unique and uncompromising vision as an artist although the mediocre (and that's being generous) technical presentation isn't helpful. My initial impression of Nakamura involved that one word thrown around too liberally when one is presented with challenging material: pretentious. Having seen Nakamura's large budget, feature film debut, I do realize any ideas of pretension stirred up from "Fe" or "The Box" are due in part to what I still feel to be themes lost in translation and steeped in beliefs I (and many others) are unfamiliar in. For the average filmgoer, "Fe" and "The Box" could be skipped with no real loss, for the more art minded, they should make a decent rental. Skip It.