Doctor Who: Time and the Rani 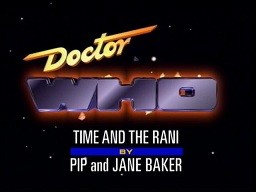 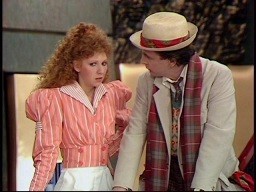 [Reviewer's Note: The following three paragraphs have evolved into my standard overview of Doctor Who from previous write-ups I've done for the original series' DVD releases here at DVD Talk. Doctor Who fans can feel free to scroll down to the next set of images for my thoughts on Time and the Rani itself.] 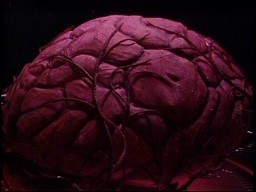 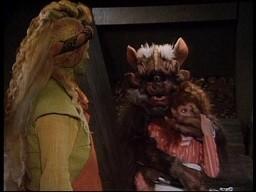 Time and the Rani was the first serial in the Seventh Doctor (Sylvester McCoy)'s tenure. It does not have a good reputation among fans in general, and I remember it disappointing when I initially watched it a couple decades ago. The biggest slap in the face for the storyline is its opening regeneration sequence. One of my personal favorite Doctors was Colin Baker (Doctor #6), who brought an unpredictability to the role of the Time Lord. Baker's enthusiasm for the character can still be seen (or perhaps heard is a better verb) today in the plethora of Doctor Who full-cast audio dramas he's performed in for Big Finish Productions during the last dozen years, where he really shines in the role. After Colin Baker was unceremoniously canned from the television series, however, he refused to return for a regeneration sequence. This left Time and the Rani with a pitiful beginning in which Sylvester McCoy wears a blonde wig, dons Baker's costume, and transforms into himself sans the wig. What a dreadful send-off for Colin Baker. The script never even explains why the Doctor regenerates.

In any case, Time and the Rani is indeed our introduction to Sylvester McCoy - and he's one of the few things that works in the serial's four episodes. McCoy taps into his energetic humor for some fun offbeat moments, and his character's nonsensical mangling of old adages can be amusing. "Time and tide melt the snowman," he observes, for instance, at the storyline's conclusion. His character would darken in the subsequent years - and the scripts would improve as well - but McCoy's early caricature here can be fun to watch.

As for the rest of Time and the Rani, well, it's sort of a disaster. The premise has the newly-regenerated Doctor and his companion Mel (Bonnie Langford) crossing paths with the Rani, a second-rate female photocopy of the long-time Time Lord nemesis the Master, who the Sixth Doctor fought during the serial Mark of the Rani. Along with her bat-like henchmen the Tetraps, she's (sort of) enslaved the indigenous population of the planet Lakertya and kidnapped various geniuses from across the galaxy as part of an elaborate plot to create a Time Manipulator. The less said about a pulsating giant brain in the last episode and how it fits into the Rani's machinations, the better.

You know, I really don't want to complain about this episode very much. Critical criticism is not fun to write, and it's not much fun to read. That being said, here a few things that really bugged me about this serial. Bonnie Langford (as Mel) proved she could be a solid companion in the Sixth Doctor storyline Terror of the Vervoids, but here she's reduced to high-pitched screaming again and again that grate on the eardrums. Part of the Rani's master plot is to impersonate Mel, who she's never met before but somehow knows all her mannerisms, to convince the Doctor, intellectually muddled after his regeneration, to help her in her diabolical scheme. This plot device is every bit as dumb as it sounds - and the fact that it gets milked for more than one episode is incredible. And while Time and the Rani marks the first usage of CGI in Doctor Who, the effects work do not gel well with the more traditional usage of rubber suits for aliens (the Tetraps) and other goofy sci-fi concoctions (the aforementioned giant brain). Not to mention that programs like Star Trek: The Next Generation were concurrently doing a much better job in this department.

Sylvester McCoy's first year as the Doctor would be very rocky, with Time and the Rani and its following serial Paradise Towers probably being two of my three least-favorite storylines from the 1980s-era Doctor Who (for the record, the third is also a McCoy story: The Happiness Patrol). The show was on the brink of cancellation, and behind-the-scenes chaos is likely the reason for these poor showings in the venerable tradition of this science fiction classic. Still, I'm recommending Time and the Rani - and not just for the obsessive collector who has to have every single episode of the series. The extra material on this disc is quite good; more on it below. 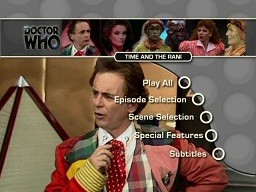 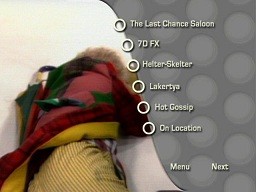 The episodes of Doctor Who: Time and the Rani are presented in a full frame 4:3 aspect ratio that reflects its original television broadcast. The image looks as good as I've ever seen it with solid colors and okay detail - don't expect stellar blu-ray visual quality here, however, given the show's 1980s video production roots.

Considering that Time and the Rani represents only four episodes of one season of a television show, this DVD release - like all vintage Doctor Who home video packages - comes loaded with a comparative feast of extras.

To me, commentary tracks tend to be the most insightful extras on a DVD. Here, actors Sylvester McCoy and Bonnie Langford along with writers Pip and Jane Baker provide comments over all four episodes. If the idea of plowing through this commentary alone doesn't appeal, then select the optional Info Text and listen to McCoy, Langford, and the Bakers while reading subtitles that provide thorough background on the production of Time and the Rani.

Last Chance Saloon (28:38) is the first of several documentary shorts on this disc; it's an interesting look at the sad state of Doctor Who in the mid-1980s, though I could have done without the narrator's jokey approach. In addition, 7D FX (11:21) looks at the episodes' visual effects; Helter Skelter (9:17) focuses on the CGI title sequence; Lakertya (2:05) briefly looks into the conceptualization of the planet setting; and Hot Gossip (2:29) has actress Kate O'Mara, actor Sylvester McCoy, and others making soundbyte recollections of Time and the Rani. All these extras are in anamorphic widescreen.

Historical extras include On Location (4:07), a vintage short regarding Time and the Rani from the BBC Breakfast Time program and Blue Peter (1:23), a brief vintage interview of Sylvester McCoy. In addition a Photo Gallery (8:17) streams stills from the show set to the episodes' score. And, the Radio Times Listings appear under PDF materials.

Time and the Rani marks a low point in 1980s Doctor Who. Colin Baker should have been treated better, though Sylvester McCoy's comic mania is entertaining in this otherwise convoluted and dumb (even by Doctor Who standards) serial. Still, like other vintage Doctor Who DVD releases, Time and the Rani comes loaded with extras - and it's because of these that I'll recommend the disc to Doctor Who fans.