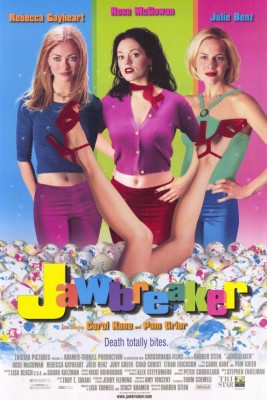 Riding the coattails of the late '90s teen-scream revival, Jawbreaker looked to add some black comedy into the rapidly expiring mix. After a birthday prank goes awry, a group of acerbic high school girls has a friend's dead body on their hands. But life must go on; after all, there are parties to plan and boys to conquer. Despite the endearing sass of Rose McGowan and Rebecca Gayheart, Jawbreaker is but a pale imitation of Heathers, a far wittier look at teen cliques.

The "flawless four" at the heart of Jawbreaker strut over bystanders at Reagan High in much the same manner as all the Heathers did ten years earlier. Led by ruthless Courtney (McGowan), followers Marcie (Julie Benz), Julie (Gayheart) and Liz (Charlotte Roldan) do their best to keep in step. All the girls are sufficiently terrible except Liz, who is kind to the school's lesser ranks. The girls mock kidnap Liz on her seventeenth birthday and throw her in the trunk of a car for a laugh. Before shutting the lid, Courtney sticks a large jawbreaker into Liz's mouth, which she tapes shut. When they check on Liz, they find she has choked to death on the over-sized candy.

Courtney forbids Marcie and Julie from calling the police, and decides to stage Liz's death as a different kind of accident. Concerned that her time in the spotlight is ending, Courtney spins wild rumors that Liz was a sex-crazed nymph who was raped and killed during a sex game she pushed too far. And with its preppy alt-rock soundtrack and snappy dialogue, Jawbreaker quickly gets down to the business of finding Liz's replacement. Fern Mayo (Judy Greer), whose admiration of Liz borders on obsession, becomes Courtney's pet project, quickly adopting a new hairstyle and the name "Vylette" to run with the crew.

Despite the same desire to provide underhanded commentary on social issues as Heathers, Jawbreaker lacks the wit and follow-through of its predecessor. I'd call the dialogue a misguided amalgam of Juno and Mean Girls, but those movies came later. Even serpent-tongued McGowan cannot sell the lame banter she is forced to recite. What was bad in 1999 is extra terrible in 2011. The nasty rape fantasy Courtney concocts is distasteful, but it's also the only time the movie goes for broke. Otherwise, Jawbreaker is stuck spinning through all the lame teen clichés that films like Scream lampooned. With token absent parents and rockstar credit limits on their Visas, it's no surprise these girls are misguided.

Despite its slick, colorful exterior, Jawbreaker is constantly undermined by a script convinced it's terribly clever. Neither edgy nor funny, Jawbreaker is a tiresome retread of Heathers and no match for Mean Girls. Of all the teen-anchored flicks of the '90s, Jawbreaker is one of the worst.

Jawbreaker wasn't exactly screaming for a Blu-ray upgrade, but the technical presentation is leaps and bounds above the film itself. The 1.85:1/1080p/AVC transfer is sharp and colorful, and both the powder-white faces of the flawless four and their pink and purple miniskirts appear as they should. The cotton candy colors never bleed, and skin tones rarely show hints of pink. Detail is pleasing even though Jawbreaker was filmed with a somewhat soft focus and shallow depth of field, which results in the image's somewhat flat appearance. I noticed only the smallest amount of noise reduction and compression artifacts. Overall, this is an unexpectedly nice transfer.

The DTS-HD Master Audio 5.1 soundtrack has no trouble handling the caustic dialogue, which stays front and center and is never overpowered or clipped. The '90s alternative/pop soundtrack is big and surprisingly brassy, and the musical tones fill the entire sound field. Effects are limited, but do make their way into the surrounds when called upon. English SDH and Spanish subtitles also are available.

Jawbreaker was a critical and commercial failure upon its release in 1999, and it's easy to see why. The talents of Rose McGowan, Rebecca Gayheart and Judy Greer are wasted on a slick, meaningless retread of Heathers that lacks the punch and attitude to support its clever premise. Inexplicably available on Blu-ray before many more deserving classics, Jawbreaker actually looks and sounds pretty good. Even so, there's no reason to revisit this forgettable black comedy. Skip It.