I'm honestly baffled by "Beastly" and I'm not sure if it's just my personal reaction to this brain-dead feature or if there's something genuinely crooked about its assembly. I walked away from the film with a host of questions, as far away from the state of swoon the producers intended as possible. It's a cold, often unbearably illogical film, but I almost need to recommend it just for the opportunity to read varied reactions from viewers. Surely, I'm not crazy, yet "Beastly" made me feel disconnected from reality, and not in an enchantingly escapist manner.

Vain, arrogant, and a little racist, Kyle (Alex Pettyfer, "I Am Number Four") is the king of his high school, showing unyielding contempt to anyone remotely unattractive. Fed up with his attitude, Kendra (Mary-Kate Olsen), the school's resident witch, decides to place a curse on Kyle, disfiguring him with a series of cuts, tattoos, and mercury burns, giving him one year to find true love or else the monstrous look becomes permanent. Losing the life of privilege that defined his personality, Kyle withdraws from society and changes his name, only confiding in his maid (Lisa Gay Hamilton) and a blind tutor (Neil Patrick Harris). Finding hope with former classmate Lindy (Vanessa Hudgens), Kyle looks to befriend the last person he actually had interest in, offering her a safe haven when her junkie father commits murder. As the two warm up to each other, Kyle finds himself close to love for the first time in his life, yet remains afraid to reveal his true identity to Lindy and the world. 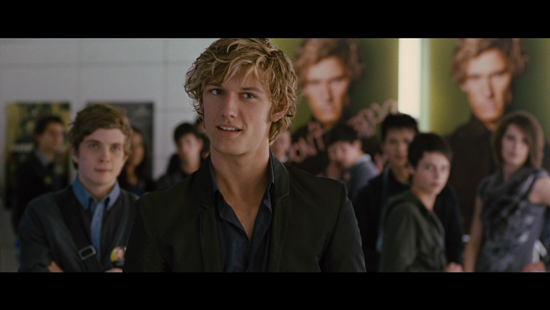 "Beastly" is based on a 2007 book by author Alex Flinn, which may be an excellent clue as to why the feature film adaptation feels incomplete. Writer/director Daniel Barnz is clearly overwhelmed by the project, submitting an unenthusiastic filmmaking effort that appears more about survival than creative design. "Beastly" is a disjointed, unfocused picture, failing to answer any of the mysteries it creates, but coherency isn't really on Barnz's shopping list. He's making the umpteenth variation on "Beauty and the Beast," and all that's necessary is the twinkly romantic grip from the two leads. The rest is just filler.

Oh, but what odd filler "Beastly" has to work with. Here's a film that has a character clearly defined as a witch, yet nobody bothers to question her when she actually proves her powers? Shouldn't Kyle seek out some form of retaliation on the goth she-beast that turned him into what looks like an emo kid who passed out on the ice during the local rec center's free skate day? The lead character doesn't even appear bothered by his hideous transformation, and he most certainly doesn't attempt to rattle the bratty source of his supposed woe for needed answers. As for Kyle, "Beastly" does a terrible job exploring the dual nature of his interest in Lindy. The two barely know each other in high school, yet mad love is pumped into the air when they finally meet again. A crush? I'll buy it, yet Kyle's such a poorly written character, it's difficult to take any warmth from him seriously. In fact, for most of the film, I assumed Kyle was playing with Lindy's heart, suckering her into love to help him escape his bodily prison. Regardless of Pettyfer's innate coldness, "Beastly" would rather have the two fall in love, despite every established hesitation. There's ultimately no sinister business or ulterior motive. Kyle's just a cool dude with a jacked face. He deserves love(!), especially from a girl he's spent exactly five minutes of screentime with, inside a high school that looks like a cross between "The Jetsons" and a Brett Easton Ellis wet dream.

And the whole "your dad just killed a dude so you gotta live with me" business? Don't ask. It's never resolved anyway. 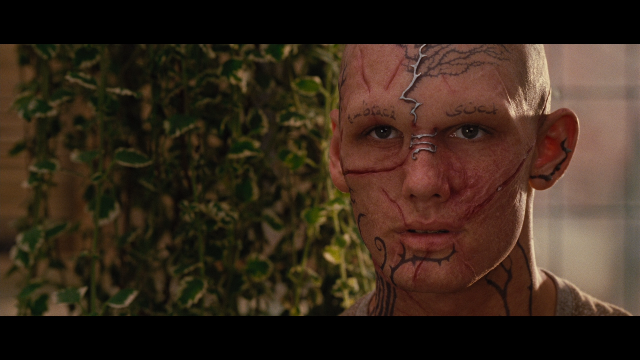 "Beastly" aims to be sweet, with Kyle building a greenhouse and writing Lindy longhand letters professing his love, or following the twosome as they break into a zoo, giving the scarred teen a chance to tell his special lady a delightful story about a mama elephant who lost her two babies, only to discover their dusty bones a year later. Swooning yet? There's also a moment where Kyle attempts to appeal to his object of desire's love of cinema by setting up a private screening of "Faces of Death." Ok, so that last part doesn't actually occur. Still, it wouldn't feel out of place.

The ending is a foregone conclusion, leaving much of the film's energy in the hands of the cast. Harris hams it up big time as the wisecracking blind teacher, a nothing role that I suppose deserves some overacting. Olsen also broadly presents as the teen witch, clearly aware that her character is basically meaningless, so she takes happily to outlandish costumes and uncomfortable piercings to make an impression. As for the lovebirds, Pettyfer and Hudgens are pretty people but not quite accomplished actors. Chemistry is there, but little else, with the extensive illogic of the piece hurting their chance to generate genuine sparks. And I'm a little upset Hudgens isn't given a scene where Lindy questions Kyle's chic disfigurement. The make-up is just so alien, begging for a moment where somebody has the seeds to openly question the reality of his supposedly "monster" look. 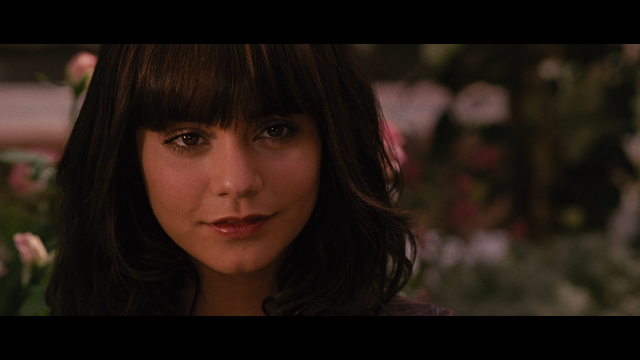 The AVC encoded image (2.35:1 aspect ratio) presentation shows an appealing spectrum of colors, using the urban exteriors and garden locations to survey a strong assortment of hues, with cool reds and blues punching through. Clarity is substantial here, with make-up details looking extraordinary, while maintaining a lock on set design nuance and costume choices. Shadow detail loses impact the further the film travels into darkness, but most of the presentation holds firm. Skintones are accurate, showing a pleasing contrast between disfigurement and beauty.

The 5.1 DTS-HD sound mix runs a little too hot at times, with soundtrack cues showing incredible muscle, blasting away triumphantly but chaotically, necessitating some volume riding as the picture jumps between acts of intimacy and party atmospheres. Dialogue exchanges offer more stability, sustaining primary emotional beats of the story without losing dominance or depth. Scoring is light but effective, restrained until melodrama kicks in. Low-end is alive, giving the various beats added rumble. 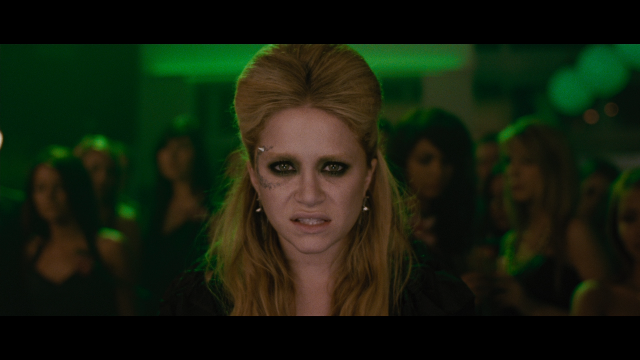 "Alternate Ending" (10:13) takes a more thriller/Disney route of resolution, making magic via violence with a traditional happy ending that packs more of a punch.

"Deleted Scenes" (4:47) offer a few brief adventures with Kyle in the city, and one moment of trust between the beast and his beauty.

"A Classic Tale Retold" (10:09) is a promotional featurette, with cast and crew interviews (including author Alex Flinn) explaining characterization and thematic intention. Some BTS footage is included, but this is more about rehearsed salesmanship than true production reflection.

"Creating the Perfect Beast" (5:07) explains the origin of the odd (but well executed) make-up work in the film, interviewing Tony Gardner, the man in charge of the look. A time-lapse peek at application is offered, but there's still no true explanation of what the disfigurement is supposed to represent. 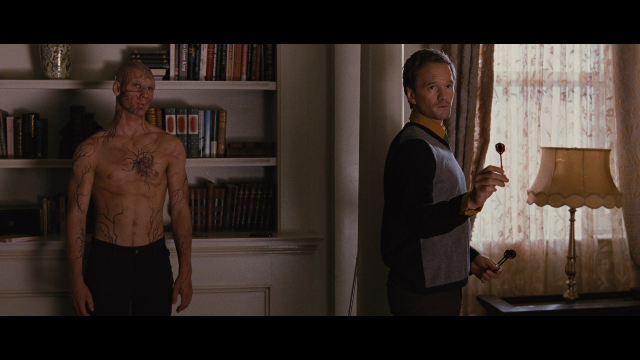 "Beastly" truly befuddles, and eventually the film stops trying to figure itself out, sticking to simplistic romantic entanglements to conjure a climax. Blech. Watching "Beastly" isn't nearly as disturbing as reflecting upon "Beastly." So, if there's an opportunity to immediately dive into a nap after a viewing, perhaps there's a good time to be had. 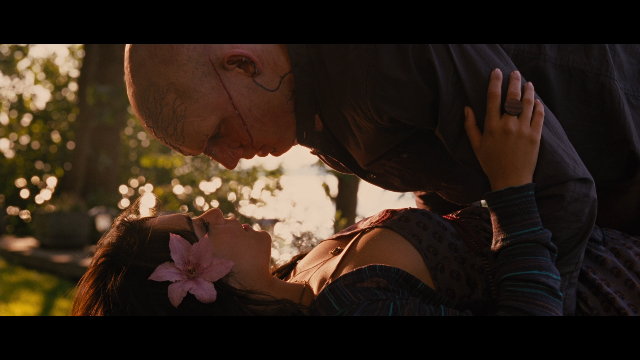