Milestone // Unrated // April 5, 2011
List Price: $29.95 [Buy now and save at Amazon]
Review by Stuart Galbraith IV | posted June 15, 2011 | E-mail the Author
Araya (1959), a rarely shown French-Venezuelan ethnological documentary/tone poem about salt miners, is the kind of revelatory movie-watching experience passed from one enthusiastic viewer to another. After reviewing it for his column, DVD Savant noticed an extra screener in our DVD reviewer's pool and to me emailed the following: "Quick - ARAYA." Savant's recommendation was good enough for me, and I'm glad I scooped it up.

The Venezuelan-born, French-educated filmmaker who directed Araya, Margot Benacerraf (b. 1926), made just two movies; this, her second, was her only feature-length work. Though Araya shared, with Hiroshima mon amour, the International Critics Prize at the 1959 Cannes Film Festival, she struggled for years afterward to get financing for her next project. She finally gave up. The only explanation for this is that both Araya and her 1952 short Reverón just aren't like other movies, even other documentaries and, generally speaking, financing an entirely original idea tends to be a lot harder than financing a project that's like a hundred other movies.

Seen today, Araya anticipates other non-narrative, tone-poem films like Godfrey Reggio's widely-seen Koyaanisqatsi (1983) and especially his less interesting but more similar follow-up, Powaqqatsi (1988). Milestone's DVD includes some very useful extra features, while the restored film, in a supremely crisp 16:9 widescreen transfer, looks like it could have been shot yesterday - or maybe 500 years ago. I did notice a weird transfer flaw spotted by no one else, though I almost wonder if I'm somehow imagining things. In any case I discuss the problem in more detail below. 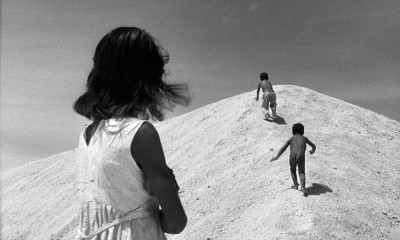 Araya is a remote, desolate peninsula of northeastern Venezuela where there's virtually nothing but salt, sand, sea, and the occasional cacti. Around 1500, Spaniards discovered that its expansive lagoon created a treasure trove of natural sea salt, and in 1500 salt was as precious as gold. Four hundred and fifty-plus years later, the salt continues to be manually extracted in exactly the same manner: "cut" from the lagoon and loaded onto small flat boats, brought on shore to be dried and sifted, hauled up huge salt pyramids, and eventually bagged and shipped off by sea to parts unknown.

All of this is done by hand: everything is shoveled and scooped and lugged under backbreaking conditions few who read this review could ever bear - I certainly couldn't. The heat is stifling and the salt sticks to the laborers' sweaty bodies everywhere, including the occasional open sore. Most of the workers wear socks but, at least the ones Benacerraf shows, are in tatters, virtually disintegrated by the hard work and salt and thus offering almost no protection.

The film features an abstract score by Guy Bernard and narration by Benacerraf and Pierre Seghers that complement the hypnotic effect as workers uncomplainingly go about their business. They are human machines, carrying 140-pound baskets of salts, one basket at a time, up the steep salt pyramids like a flesh-and-blood conveyer belt. It's a staggering achievement, really, that without any post-industrial revolution devices these workers are able to build these huge white mountains. It's hard to watch this agonizing work and not think of the pyramid-building slaves in The Ten Commandments, or maybe hard-time prisoners hammering away at "living rock" in Sing Sing rock quarries. In Araya the workers almost never talk among themselves. Other than the narration, probably less than 50 words are spoken in the entire picture. (Reader Sergei Hasenecz writes, "It is of interest to note that in the early years of Sing Sing prisoners were not allowed to talk among themselves. Talking could result in harsh punishment. Nothing but silence and work.")

Both the music and the narration (spoken in the original Spanish version by José Ignacio Cabrujas; Laurent Terzieff performs the French-dubbed track) superbly underscore this ages-old routine, repeated day-after-day in exactly the same way, and unchanged for centuries. Entire families, including children under the age of ten, are all cogs in this salt mining operation, cut off from the rest of civilization, disconnected from time itself. A child joining the mining needs no day planner; he'll be doing exactly the same thing every day for the rest of his life.

A few other family members have ancillary jobs. Some catch and sell fish, the only local source of sustenance; one lady is in charge of distributing the fresh water that has to be shipped in, the water truck being one of the few signs of 20th century technology.

The film also repeatedly emphasizes Araya's (pronounced "a-RA-zja") eternal coming together of sea, sun, and wind to produce the coveted salt, and which coincidentally is responsible for the inhospitable living conditions for those who gather it and sleep in nearby shacks. The photography of all this, credited to Guiseppe Nisoli, is staggeringly good. The film concludes with the sudden invasion of modern technology, which threatens both the miners' livelihood and the delicate ecological balance of Araya itself, begging questions helpfully answered in the DVD's supplementary material.

Araya is presented in its original 1.66:1 format with 16:9 enhancement. There are both Spanish and French narration options with yellow English subtitles. The film has been completely restored by Milestone, supported by FotoKem Laboratories, Audio Mechanics, DJ Audio, Modern Videofilm & Scott MacQueen, and Pro-tek. The black and white image is just about perfect, as is the audio (I listened to the mellifluous Spanish narration), which doesn't sound 50-plus years old at all.

I did notice a weird flaw with the image, regardless of the player I used. My DVD at least exhibited a distracting jitteriness whenever there was any significant motion: the rolling surf, panning shots, a salt boat drifting along the water, etc. In other words, it looked very unnatural, turning what should have been fluid motion into something jerky and mechanical, like the innards of a Bulova watch. The coming attractions trailer, included as an extra feature, did not exhibit this problem.

However, I seem to be the only reviewer that has encountered this particular problem, so it's possible I simply received a bum disc. I asked DVD Savant to re-check his disc, which turned out to indeed be just fine.

The disc includes terrific supplements that answer two key questions: How did this film come about? and What has happened to the Araya Peninsula and its workers in the half-century since?

Benacerraf is the subject of several interviews, the main one being The Film of Her Life: Araya (2007), which is very good; and several television interview pieces, which are less so. Her earlier short film, Reverón, about the Venezuelan painter, offers similar fine assets. Commentary tracks accompany both the feature and the short. A trailer is included as are helpful DVD-ROM features.