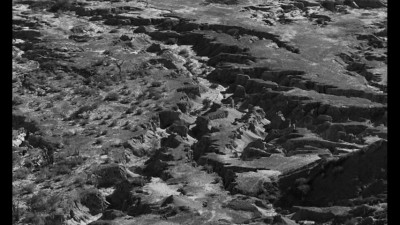 The Araya peninsula, on the Venezuelan coast, was for hundreds of years home to salt-mining and fishing villages in which generation after generation of struggling but resilient residents lived and worked. In the late 1950s, industrialization finally reached these remote communities, instantaneously beginning to erode their way of life. Right on the cusp of the arrival of the machines that would soon replace most of the human hands needed for the available work on the peninsula, filmmaker Margot Benacerraf brought a crew to the coastal villages of Araya with the project of capturing something of the vitality, beauty, and severe difficulty of the villagers' lives and work. The result is Araya, a towering work of cinema that, while strictly speaking a documentary, is as difficult to narrowly categorize as it is unequivocally delightful to watch.

Although Araya is much more a visual and aural experience--it has often been described as a "poem"--than down-to-business dramatic storytelling, it does have a beautifully symmetrical structure, a sort of loose triptych that shifts perspective and tone over the course of the film, from the grandest, most timeless scale to the most intimate and immediate. Araya opens with gorgeous, very wide shots of the peninsula's harsh, awesomely monolithic desert landscapes, beaches, and salt pyramids as the narration (written and spoken with an exquisite force and sensitivity by poet José Ignacio Cabrujas) relates a thumbnail description of the region's geographical particulars and a history of its sixteenth-century conquest by the Spanish for its rich supply of salt, at that time an extremely precious commodity. We then go in a bit closer to see, still from above and far away, the film's first human figures--the crowds of villagers who work on the sea and among those glistening white pyramids as salt cutters, refiners, and fishermen. 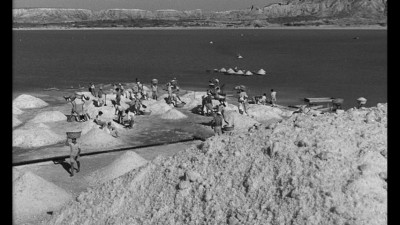 Benacerraf then takes us closer still to the human figures, so that they become central in sequences documenting the almost ritualistically repetitive daily life of the villagers, always at the mercy of nature as they toil against the shimmering, imposing backdrop of sand, salt, and sun (which, we're reminded with almost mantra-like recurrence in the narration, beats down with relentless heat upon the land and the workers). This middle section, by far the longest in the film, observes a typical 24-hour day in the lives of three families--the Peredas, the Salazars, and the Ortizes--who inhabit different villages on the peninsula and demonstrate the fishing and salt-cutting work that occupies almost the entirety of the peninsula-dwellers' lives, creating a regular, perpetual cycle of work, rest, and very little play. Finally, through the evening of the day and on into nightfall, Benacerraf segues into a more tranquil, contemplative mode as she records the slower-paced--if no less exacting--domestic work of the wives and daughters of the villages, and the women and children of the families eventually drifting off to sleep, though many of the men continue their labors into the night (salt never sleeps). The day, like any and all other days on the peninsula, draws to an end, with the certainty of more or less the same sequence of events re-commencing with the next day's dawn. 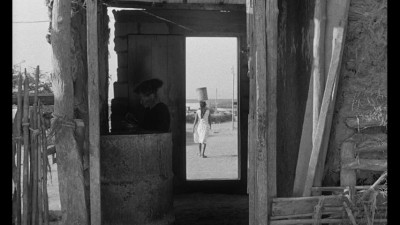 The film's jarring epilogue then crashes in abruptly, explosively, making the sudden appearance of a new, industrialized system of extracting the area's salt feel like an encroachment upon--if not a violation of--the rhythm of Arayan life. Through adroit montage and framing, Benacerraf contrasts the people to the machines that they now find suddenly on their horizons. After hundreds of years of near-identical days dominated exclusively by what the sun and sea provided, an extremely difficult yet dignified and self-sustaining way of life is about to come to a very rapid end. Our narrator wonders, in conclusion, what effect these inhumanly efficient new machines will have on the strong but weary villagers and their demanding yet reassuringly consistent way of life, now suddenly obsolete, that is all they have ever known or needed. 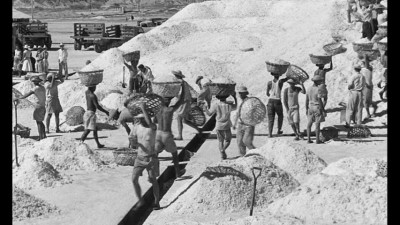 It would be difficult to overstate Benacerraf's accomplishment. Her work here (along with a brilliant team including DP Guiseppe Risoli; editor Pierre Jalluad; and composer Guy Bernard) is impressively confident and skillful--"professional," if that's the word--while holding true in every frame to its impassioned, personal, and unique vision. There are no obvious homages--Benacerraf is too early (Araya, released in 1959, is concurrent with the birth of a French New Wave that had not yet crossed the Atlantic) and too earnest for that--but the effect she achieves is like some ingenious, impossible fusion of two near-opposite Italian masters: her interest in "mundane" (read: universal) human activity and concerns is as heartfelt and simply conveyed as the great Neorealist Vittorio de Sica's, while her attraction to and eye for the foreboding, beautiful landscape and architecture that at once backgrounds her characters' existence and highlights their relative smallness recalls ultra-modernist cinéaste Michaelangelo Antonioni. Whether shoulder to shoulder with Araya's people and their endeavors or encompassing the peninsula's broader, infinite-appearing landscapes, Risolo's black-and-white cinematography (marvelously restored on the DVD) creates rich, often Malick-like images that, in themselves, beguile; deployed in service of Benacerraf's artistic insight and well-channeled humanistic passion, they, and the film in its entirety, are nothing short of exhilarating. Araya is the work of an artist, and a masterpiece at that. How wonderful that it has now been discovered, restored with such care, and made widely available so that it can take its rightful place in our cinematic canons after being inexplicably consigned to the periphery for far too long.


With the exception of some rare flicker or grain in certain scenes, Araya--presented in an anamorphic transfer at its original aspect ratio of 1.66:1--is amazingly free of the flaws one would expect in a "rescued" film that is five decades old. Milestone Cinema has clearly taken the utmost care in bringing us an Araya that looks as good as possible. This is one of the finest DVD transfers of an older film I have ever seen.


The Dolby digital 2.0 soundtrack is sparkling clear; every nuance of José Ignacio Cabrujas's narration and Guy Bernard's score come through the speakers with resonant immediacy. The sound, like the video, has evidently been preserved to the highest possible standards.


Milestone has gone out of its way to offer a bevy of supplements for Margot Benacerraf's great film. The main dish is her earlier 20-minute short film from 1953, Reverón, a somewhat more straightforward documentary than Araya (though it is far from conventional, anticipating in many ways the poetic style of the subsequent full-length endeavor). While offering some interesting retrospective biographical details and an introduction to his finished work, the film really captivates as it records the fascinating present-day world of Venezuelan painter Armando Reverón, at work in his seaside villa, surrounded by his drawings, canvases, and the puppet-like mannequins he uses as models and muses. The highly specialized atmosphere Reverón creates for his own inspiration is captured by Benacerraf with camerawork, editing, and lighting that in themselves create the feeling of inspired cinematic "brushstrokes." 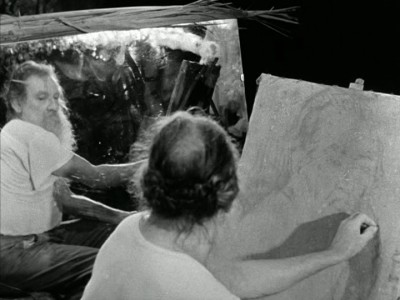 Three short films on Benacerraf and her work are also included. Mas allá de Araya is a part-homage, part interview 1995 TV documentary (on somewhat primitive-looking videotape) that features Benacerraf's colleagues from South American cinematic and critical circles as well as some footage of Benacerraf commenting on her career trajectory and work. César Cortez's 10-minute 2001 short Moving Paintings: An Interview with Margot Benecerraf is a prettier, more succinct attempt at covering some of the same ground. Here, Benecerraf gets a bit more technical and specific, and this piece will be of great interest to anyone who has just watchedAraya (her thoughts on sound, for example, could be used as inspiration and instruction in any film school class on the topic). French filmmaker Antoine Morel's 2007 short The Film of Her Life: Araya takes Benacerraf back to the peninsula, where she reunites with some of Araya's subjects and speaks to the camera, against the backdrop of the sea and sand she filmed decades ago, on her initiation into the world of cinema and the process of making the film. In all of these in-person discussions, Benacerraf is at once highly articulate and down-to-earth; in her work and in her personality, she is reminiscent of Agnès Varda, a cinematic grande dame also known for blurring the lines between documentary and narrative film, who could be viewed in some ways as Benacerraf's French counterpart (Jamie S. Rich's comparison of Araya to Varda's La Pointe Courte is very apt).

Both Reverón and Araya have commentary options, with Milestone Films co-founder Dennis Doros interviewing Benacerraf (the separate commentaries appear to be taken from the same interview session, though each is centered on the film under discussion). These are much less scene-by-scene commentaries on what we are seeing than very well-done, in-depth, somewhat free-associative interviews packed with yet more interesting of Benacerraf's thoughts and autobiographical anecdotes (for one juicy tidbit, she was a close friend of legendary Cinémathèque Française founder Henri Langlois when she lived in Paris). As evidenced in the other extras, Benacerraf is a great interviewee, and Doros, for obvious reasons, makes for a perfectly enthusiastic and knowledgeable interviewer.


It is astonishing that Margot Benacerraf's Araya has not been as widely acclaimed, distributed, and seen over the years as other legendary world cinema; it ranks with the best-known work of Bergman, Kurosawa, Satyajit Ray, etc.. In documenting a remote region of her country, its people, and their way of life, she reaches breathtaking heights, both emotional and intellectual, artistic and political. Araya is, in short, a work of the very highest order that does some of the greatest things cinema can do, and Milestone should be applauded for bringing something so valuable to us, with so much care and attention lavished upon its audiovisual integrity. Their release of this great film takes DVD-era technology and puts it to a truly admirable purpose: to alert us to, and give us the opportunity to experience, a half-buried cinematic treasure. DVD Talk Collector Series.