Image // Unrated // September 27, 2011
List Price: $14.98 [Buy now and save at Amazon]
Review by Kurt Dahlke | posted September 21, 2011 | E-mail the Author
Herschell Gordon Lewis: The Godfather of Gore:
Come and listen ye to a story of a man who changed the movies. His name is not well known except in three exclusive groups, but if you're reading this, you probably fit in there somewhere. Yep, back in the day we used to call him H.G. Lewis, but by any other name he's the Godfather of Gore, and a pioneer of Nudie Cutie pictures, not to mention being a towering figure in the world of Direct Mail Marketing. This 106-minute documentary will fill you in - maybe not so much about Direct Mail Marketing - giving you a unique portrait of the man who would paint the screen red. 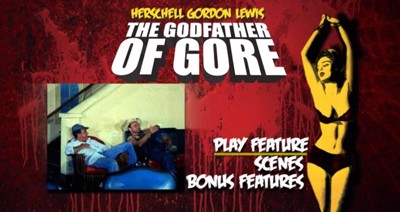 Laid out for viewers like a spread of pig intestines, Lewis's story looks a lot like other documentaries, but as directed by Frank Henenlotter and Jimmy Maslon, the document itself drifts into the realms of the weird, the corny, and of course the disgusting. Lewis's career took off, in a way, in the 1950s, when he partnered up with David Friedman to produce and distribute Nudie Cuties, innocent films featuring topless ladies dancing and jumping rope. (You see, before the Internet, there was a notion called decency, with censors keeping sex out of movies. Guys like Russ Meyer and Lewis took their cameras into nudist camps to document the phenomenon while giving male viewers a cheap and chaste thrill.) Of course Lewis managed to take his Nudies just a little further - raking in modest green from miniscule investment. But that wasn't the end of his story! 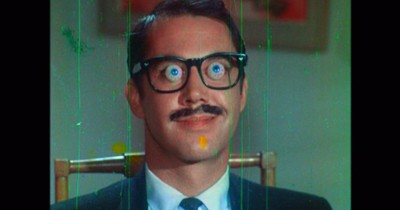 Oh no! As quickly as Lewis and Friedman raised the bar for sexploitation, they got bored. Looking for untapped veins of exploitation, they settled on extreme gore, starting with the 1963 feature Blood Feast. For America, this was a truly pioneering effort in bad taste. For Lewis, it was another cash cow. More gore films followed, as well as other cinematic ventures into weird corners of celluloid exploitation, before Lewis hung it up in the '70s. (He then went on to make real money in Marketing, before returning to the realms of red in the early part of the 21st Century.)

Three things make this documentary special, it's a beautifully entertaining documentary for fans of Lewis's work, it's craftily directed by Henenlotter and Maslon, and it reveals the beautiful spirit behind some truly suspect movies. 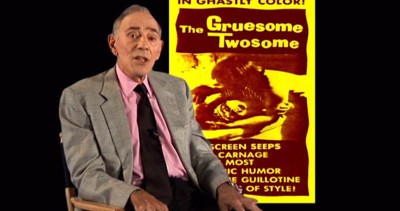 Most hardcore gore fans have seen at least a few Lewis movies. They know what it means; vile, amateurish gore, and even more vile, amateurish acting, and viler-still production values. While deifying Lewis as the first and the worst, they acknowledge that, on multiple levels, these movies are hard to sit through. Yet that weird appeal remains, so the fans read whatever and all they can about Lewis, but few know him like you will now, watching this amazing man - 81-years-old at the time of filming - as he sharply details his life in cinema through one amusing anecdote after another. This is all Lewis, there are few out there more personable, frank, realistic, and optimistic as Herschell. Each time he opens his mouth you can feel his magic. He's not ashamed either, even while discussing an effects shot involving a maniac snipping off nipples - one which then squirts plain milk, while the other squirts chocolate.

There's no better barometer of a person's tolerance than that gruesome scene from the horribly horrible classic, The Gore-Gore Girls, but if you can take it, then you'll know this movie is crammed to the gills with funny discussions of just that type of stuff. Interviewees include Lewis, (of course) Friedman, John Waters, Joe Bob Briggs, and many other members of Lewis's casts and crews. Henenlotter, Maslon, and producer Mike Vraney adopt the Lewis ethos, staging some interviews as poorly staged, poorly acted scenes in the types of motel rooms Lewis would rent to shoot his pictures. Friedman is propped up in front of a massively rotund tree trunk, other subjects are filmed in uncomfortable close-up. Every shot shows care and attention to detail not often found in documentaries. Not only are the basics taken care of, but also, shots are meant to be interesting, thematically cohesive, and to further the atmosphere of Lewis's sick and sleazy world. Packed with great interviews, numerous clips, and outtakes galore, this is a documentary that gets it, it's one for the fans, and it's one for the ages.

Video:
Something Weird brings you this documentary in a 1.78:1 ratio with a fine quality picture by DVD standards. Interview subjects look crisp, clear and sharp, details are strong and colors look natural. Clips and outtakes are generally presented in their original 4 X 3 ratio, but still look good, since most are sourced from Something Weird's previous releases of Lewis films. Outtakes of course are more like home movies in quality, but are an awesome inclusion.

Sound:
Dolby Digital Stereo Audio is sharp and damage free. Pedestrian stereo separation is about as fancy as the audio package gets, but it does the job just fine.

Extras:
Extras include over an hour of Deleted Scenes from the documentary, all of which might just have well made it in to the final cut, except most folks wouldn't cotton to a three-hour documentary about a gore movie director. An H.G. Lewis Trailer Reel highlights eight films, including one for the documentary itself. The others are: Marijuanna: Assassin of Youth, The Gruesome Twosome, Alley Tramp, She-Devils on Wheels, Goldilocks and the Three Bares, Something Weird, and The Wizard of Gore. An Exploitation Art Photo Gallery and the silly Nudie Cutie 10-minute short, A Hot Night at the Go Go Lounge! finish things off.

Final Thoughts:
Frank Henenlotter, Jimmy Maslon and Mike Vraney shine a kooky light on the Godfather of Gore, Herschell Gordon Lewis, a man ye probably haven't heard of unless you like blood and guts, historical topless dancing, or advertising in the mail. Full of hilarious and interesting stories from Lewis and his crew, plus interviews with John Waters, Joe Bob Briggs, and others, this movie will enthrall you, it will disgust you, and your jaw will drop in amazement! Well, that's how Lewis, a consummate salesman and optimist, would have said it. Henenlotter and the rest merely mix together a creative and enthralling documentary about the birth of the gore film, among other things, packed with scandalous clips and outtakes. For H.G. Lewis fans, this is Highly Recommended.