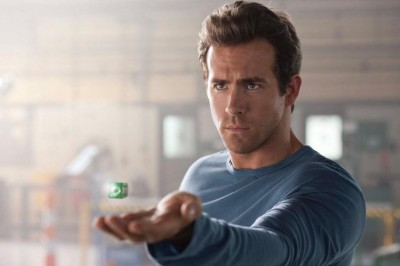 "Green Lantern" is a superhero film where nothing genuinely super occurs. A longtime bridesmaid in the comic book realm, Green Lantern finally takes command of his own cinematic vehicle, but for all the shiny visual effects and unabashed goal to kick off a franchise, the production has forgotten to include fundamental elements of compelling drama and excitement, spending so much time building the world, they don't have any fun with it. It's a lifeless, tremendously disappointing motion picture, consistently making dreary choices with a limitless universe of powerful heroes and complicated villains.

A test pilot, Hal Jordan (Ryan Reynolds) is haunted by the death of his father, allowing fear to rule his life despite his considerable skill flying jets. When alien Abin Sur (Temuera Morrison) crash lands on Earth after a tussle with the all-powerful planet-gobbling entity Parallax, his power ring "finds" Hal, inducting him into the Green Lantern Corps, a squad of intergalactic creatures tasked with protecting the universe, working from the planet Oa, their home base. Hal, now in possession of literal willpower to help dream up any defense, heads off to learn the ways of the Corps, growing into a rash and unsteady Green Lantern. However, Hal must develop self-control when Dr. Hector Hammond (Peter Sarsgaard) finds himself infected by the yellow power of the Parallax, bursting with a destructive mental ability, soon turning his nefarious attention to object of desire Carol Ferris (Blake Lively), Hal's lifelong friend and fellow pilot. 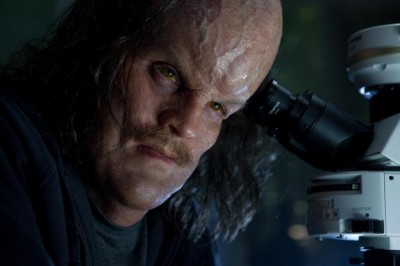 There are several problems with "Green Lantern," but the primary offense here is the uninspired script, which is credited to four writers. The screenplay is faced with an arduous task of condensing comic book history and character development into a single 100-minute motion picture, but it's not an impossible challenge. Instead of judiciously arranging the bizarre particulars of Hal's emerald rebirth, the script merely vomits forth a series of disjointed events, hurling names and places at the viewer, trusting sheer spectacle will help the logic stick. Fans of the character will undoubtedly have an advantage, but even the most die-hard, homemade-ring-wearing supporters might find themselves wondering just what in the heck "Green Lantern" has done to the majesty of Green Lantern.

Instead of developing Hal as a complex man of doubt, the writers brand the character with cheap daddy issues, tying his critical sense of fear to the day he witnessed his father, an ace pilot (Jon Tenney), die in a fiery crash. It's obvious and unconvincing, but worse is a pseudo romance between Hal and Carol, pounded into the picture to tenderize the proceedings and to generate a personal reason for Hal to chase evil. Forget that Reynolds and Lively lack chemistry or that the actress looks ridiculous trying to play a worldly adult (she's abysmal in the role, looking like kid dressing up in her mother's clothes). The pairing is just a lazy development in a film built in the most obvious manner possible -- there's little here that digs into the intricacy of the Green Lantern world, playing beautifully with the stimulating extravaganza. The script is just a rigid series of expected set-ups and knockdowns, hungry to connect the dots instead of cutting loose, fitting Hal for some idiosyncrasy the picture is dying for. 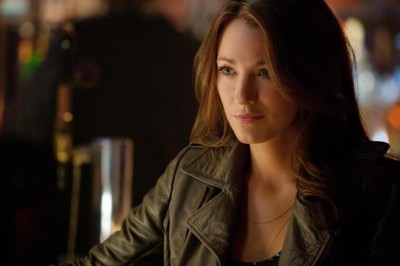 Nothing really clicks here. Hal's a bland hero saddled with a formulaic arc, with director Martin Campbell committing a major blunder by limiting the velocity of Reynolds's natural charisma. Hal doesn't need to be an impish jester, but Reynolds feels bound by the continuous visual effects and the character's shallow pool of anxiety. He's lifeless, but at least he's not Sarsgaard, who's miscast and uncomfortably squealy as Hammond, a villain who ends up being rather superfluous to the plot, merely biding time before Parallax clouds into town. Supporting characters, such as Senator Robert Hammond (Tim Robbins) and Dr. Amanda Waller (Angela Bassett), are pushed to the fringes, powerless to make much of an impact, while vocal performances from Geoffrey Rush and Michael Clark Duncan, as Hal's Lantern trainers, are wasted on lousy dialogue. Better is Mark Strong as Sinestro, the de facto leader of the Lanterns, who looks to be initiating a larger character arc to be played out over several sequels, supplying knowing looks that hint at future plans. I assume villainy of some sort. After all, his name is Sinestro. 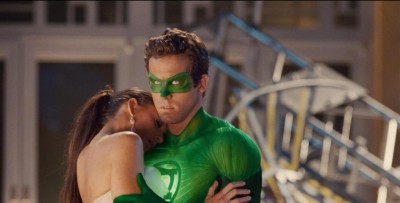 "Green Lantern" is a drag, but a colorful one. The oodles of money spent to construct the world is clearly visible on screen, with Hal's Green Lantern suit itself a glowing visual effect, further restraining Reynolds from an unpredictable performance. The feature has scale and interest in action, but it's a soulless thrill ride, making a familiar comic book commotion without a sparkling personality or daring script to keep it awake. A superhero film shouldn't feel like a bedtime story.