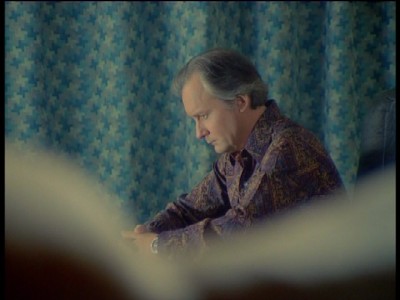 Alfred Hitchcock was a touchstone for all of the French New Wave filmmakers (Truffaut and Rohmer wrote entire books on him), but the master's influence might be most directly evident in the work of the late Claude Chabrol, the most consistently prolific of the New Wavers (he turned out more or less a film every couple of years between 1958 and his death last year). Chabrol is not so much an imitator as he is a kindred spirit; despite many stylistic and narrative differences, his films have a deep-down likeness to Hitchcock's sensibility and worldview. His best films (like Story of Women or La Cérémonie) share liberally in that Hitchockian tone of detached, observant, completely absorbing bemusement upon witnessing the quiet moral apocalypse that apparently plays out daily in ordinary lives. Every bit as nonchalantly nihilistic and calmly disturbing as Chabrol's best work, his 1971 film Just Before Nightfall (Juste avant la nuit) belongs in that category.

The film tells the alluringly nasty story of Charles Masson (Michel Bouquet), a mediocre, bland, and punctilious haut-bourgeois to whom the return of the passionate, violent repressed happens in spite of himself. Charles, who lives in a gated mansion in a Parisian suburb with his beautiful wife, Hélène (Stéphane Audran, Chabrol's real-life spouse at the time), beautiful children, and beautiful things, works successfully in advertising. He also carries on an affair with Laura (Anna Douking), the wife of François (François Périer), his close friend and the designer of their neighboring homes. The affair part is so par for the course for the French upper middle class that not being adulterous would actually be less conformist; but the particulars of this affair finds its two participants getting in touch with all the things (danger, fear, death, blunt expressions of violence and power) that the rules of their existence are designed to block out. Laura likes play-acting nightmarish, menacing, violent scenarios when making love, and Charles, to his horror, finds the proposition irresistible. When one of their erotic games goes too far, however, Charles is left with a dead mistress, a widowed friend, and a conscience that grows heavier day by cheerful, prosperity-filled, pleasantly comfortable day. 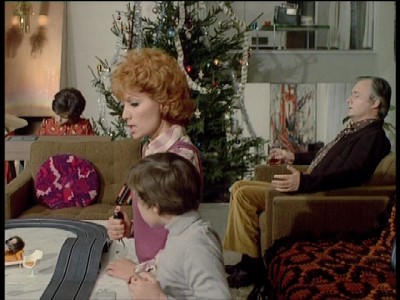 The murder (or is it?) takes place within the first two minutes of the film, matter-of-factly and lurid only in content. Nothing, not even a kinky sex death, makes too much of a ripple on the assured, queasily placid surface of a Claude Chabrol film, and there is no sensationalism involved in the graphic-enough but tactful playing out of the sordidness. No, the ripple effect of such a hideous act goes much further and deeper than that. The rest of the film deals with the aftermath, and this turns out to be a wonderfully successful structure for Chabrol's goal of disquieting us: what would all the nice family rituals with the lovely wife, the cute and well-behaved kids, the perfect Christmas, etc. look and feel like under the shadow of treachery, a traumatized conscience, and the tortuous inability to decide for yourself whether you subconsciously wanted to thrill-kill your extramarital sex partner, or if it was just an accident. For a long stretch of the film, we see the most banal bourgeois rituals through Charles's guilty eyes, and Chabrol's clear impression of their falsity is brought home nicely by our knowledge of the real, much darker and more complicated existence with which they are being implicitly contrasted.

The cops are on the trail of Laura's killer, of course, but the law is depicted here as eager-beaver, careerist, and ineffectual--omnipresent, yet not really a threat to Charles. His dilemma is more interior. He resembles an upper-class, mid-20th-century version of Raskolnikov in Dostoyvesky's Crime and Punishment: "getting away with it" and having the universe revealed as inherently unjust is more horrifying than being caught. The film's dramatic tension thus exists well outside the circumscribed codes created by Good, Productive Citizens and enforced by their protectors. The conflict is between Charles's own "badness" (his affair and unplanned crime) and his "goodness" (his increasingly bold, near-masochistic urge to confess and be truly punished). The surprising reaction of Hélène when he can finally keep the secret from her no longer clues us in to the idea that Charles's good and bad impulses actually have something in common, something that separates him from his "respectable" milieu: their authenticity, however unpleasant; and their immoderation, their reckless obsessiveness in the face of obligatory caution. The film's ending, which is unpredictable even after we have been so immersed in the events logically leading up to it, could leave you lying awake at night, wondering who the real heroes or villains of the picture really are, and who really triumphed in the end. 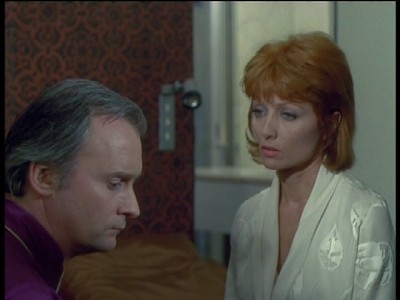 Coming as no surprise to any Chabrol fan, there is an assured elegance to every detail of Just Before Nightfall, from the actors' performances to Jean Rabier's cinematography to Pierre Jansen's music and Jacques Gaillard's editing. Not many since Hitchcock have been able to bring off his trick of unfolding a film at a calm, unhurried pace and yet doing it so very well that every scene feels fluid, taut, tense, and loaded; but Chabrol accomplishes that here, just as he did so often throughout his career. Though he was a contemporary and colleague of Godard,, Chabrol's approach is, in a way, opposite to that of his more outwardly radical peer. He prefers to employ sneaky seamlessness rather than self-conscious disjunction to get under your skin, and that is right where Just Before Nightfall takes up residence. It is both a highly entertaining and genuinely haunting experience.


The video for Pathfinder Pictures's DVD release of Just Before Nightfall is rather problematic. On the one hand, it is a nice opportunity, at long last, for those of us in Region 1 to enjoy one of Chabrol's greater works. On the other, the transfer is subpar in almost every way; not having the knowledge to back it up, I would hesitate to make the accusation that Pathfinder has just transferred a VHS copy onto DVD, but that does seem possible. There are grain, blur, single-frame tears/scratches, and instances of aliasing and blocking galore.

The aspect ratio is also a real problem. The film is presented full-frame, though it is at least not pan-and-scan (which would be unforgivable). The situation here is similar to the one that menaced Warners' early Kubrick DVD releases--The Shining, for example--which were not letterbox formatted, instead offering the "square" as opposed to rectangular image of the original camera negative. In a nutshell, with Just Before Nightfall we get a square image that would fit an old TV and appears as a 1.33:1 aspect ratio on your wide screen; it is as wide as it is supposed to be, but taller than it would have been for theatrical exhibition. It therefore does not technically omit any visuals, but if, like me, you prefer to view a film in a format as close to its theatrical presentation as possible, this is a significant drawback.


The monaural Dolby 2.0 sound is only fair. Especially in the last reel of the film, there is some fairly persistent crackle and pop on the soundtrack, which is noticeable but not prominent enough to be too intrusive.


Incisive and elegant, Just Before Nightfall stands with the best of Claude Chabrol's sardonically Hitchcockian body of work. Unfortunately, Pathfinder Pictures has not done the film justice with its new DVD release, and in light of the fact that an evidently much higher-quality Region 2 disc is available, their shoddy treatment of this fine movie is just further motivation to invest in a region-free player. Otherwise, if you have no other option, the transfer is watchable, if notably subpar. It is a film worth seeing any way you can, so my advice would be to Rent It for now and put off adding it to your collection until a) you have access to an all-region player, or b) a better Region 1 disc is released by a company is able to give the film the treatment it's worthy of.