My Life as a Dog: The Criterion Collection 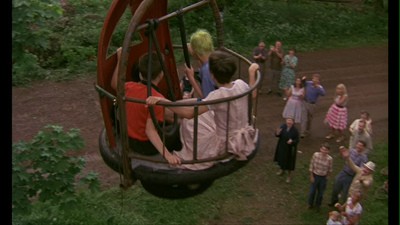 Please Note: The screen captures used here are from the standard-definition DVD released in 2003, not from the Blu-ray edition under review.

I first saw the 1985 Swedish film My Life as a Dog when I was in high school. It was a bad VHS copy, dubbed into English. One of the characters--I think Saga, actually--was voiced by the guy who was also Lance on Robotech, which was supremely distracting. The colors were also way off, and Manne's hair wasn't so much green as it was a sickly yellow. Oh, those were the days.

We watched the movie at the house of a girl with whom I was having a long-term one-sided love affair. It was the sort of painful relationship that nice guys often find themselves in at that age. Rather than move on only to have yet another girl say they'd rather be "just friends," I guess I had settled where I was in the hope that maybe if I waited around, she'd see what she was missing and finally realize she loved me, too. Of course, what no one tells you at the time is that these girls always know that's what you're doing, and in this case, I became the patsy that was easy to take advantage of.

Except, to say I didn't know is probably a lie. There is a point in My Life as a Dog when little Ingemar (Anton Glanzelius) has just learned the fate of his much beloved canine, and he has locked himself in the shed his uncle calls a summer home to have a cathartic, transitional cry. The uncle (Thomas von Brömssen) comforts him, but also asks, "You really did know, didn't you?"

I'd say yes, he did, but Ingemar didn't want to grow up, so he was pretending. About all of it. About his dog, about his sick mother (Anki Liden), and even about the cute tomboy, Saga (Melinda Kinnaman), who loved him enough to share her secrets with him. To return her affection would mean to share his own secrets and thus be ushered into adult life. Better to stick around with his false maladies, like not being able to raise his glass to his mouth, and throw tantrums where he can bark like a dog rather than deal with the matter at hand. If only he knew how lucky he had it. What I wouldn't give for the simplicity of a lover who could express herself with an honest and unassuming right hook!

At 12 years old, Ingemar is in the last stage of life where everything can still be black-and-white. His mother is not sick enough to die because he says she isn't, simple enough. Stick your fingers in your ears and talk louder than the noise around you, and it will go away. Shades of gray are only intrusions, and Earth-shattering ones at that. Though, unlike a lot of coming-of-age stories, in My Life as a Dog, director Lasse Hallström shows us that Ingemar's response to his crazy world isn't so nuts after all. Au contraire! It's right in step with everyone else.

The small Swedish village that Ingemar is sent to when his mother can no longer care for him is full of fakers of the first order. The whole place has a case of arrested development. (Arguably, this is a psychosis of the 1950s, when the film is set.) The men are sexually immature. The old Mr. Arvidsson (Didrik Gustavsson) hides an underwear catalogue under his mattress when his wife isn't looking, and Ingemar's uncle spends hours reminiscing about the temperature of the breasts he's fondled in his past. (It's he, too, that teaches Ingmar to bark as a seduction technique, though the young boy uses it as a sexual dodge.) No wonder that the town's Aphrodite, the blonde and curvy Berti (Ing-Marie Carlsson), has to take the child Ingemar along to protect her honor when a pervy sculptor (Lennart Hjuström) wants to capture her naked form as the "Ur-Goddess." He's the same sculptor who has been adding breasts to the milk jugs in the town's glass factory. When the men all play at being 12-year-olds, only a real 12-year-old can hold the standard for chivalry.

Saga is responsible for the most important pretense, however, and also responsible for pushing Ingemar out of his. When Ingemar first sees her on the soccer field, he doesn't realize she's not a boy, and he's warned never to bring that up. When her breasts begin to develop, she enlists him to help her strap them down so that they won't be obvious on the playing field, so that she'll still get to play. Eventually, they grow bigger and she fears they can't be bound any longer; so, she tries to put them to use and engage in a game of touching with Ingemar. His refusal sparks her anger, and so when he refuses to be a man, she forces him to by telling him the truth about his dog. It could be seen as a selfish act, but she pays her own price for it: we only see her in her androgynous uniform one more time. By film's end, Saga is wearing a dress.

For a whacky kid, Ingemar has his head on straighter than he gets credit for. He's already embraced a moral relativism, believing that one can only really judge his pain by relating it to someone else's. Then, you'll find there is always someone who is worse off than you. Hallström, who would go on to American success with What's Eating Gilbert Grape? and Chocolat, illustrates Ingemar's philosophical musings with shots of the vast and speeding universe, a visual metaphor of all of the possibilities that lay before his hero. Space travel is a recurring theme, with the summer house having a pointed roof like the nose of a rocket, and Ingemar's totem for the creature that has had it worse than anyone, the Russian cosmonaut dog Laika. The boy sees himself as the space-faring mongrel, jettisoned by people he trusted into an orbit he doesn't understand, left to die out on his own.

Yet, the most hopeful and least obvious of these space images is the fake UFO built by Manne's grandfather (Arnold Alfredson). Little more than a giant tin can attached to a wire, its maiden voyage gets stuck in mid-flight, hanging over the street, suspended in the air. Its second voyage, which Ingemar lets Saga join, makes it all the way to the ground, even though the kids end up crashing in a manure-filled cow pasture. Eh, such is life. You can't fly without risking catastrophe, and the thrill of success is walking away unscathed.

Eventually, I wised up, too. I realized I was in a mutually parasitic relationship that I had to get out of. I had been using this girl as an excuse not to take care of my own business just as much as she was taking advantage of me. Like Saga's revelation of the dishonesty surrounding Ingemar's dog, so too did this girl bust the spell by revealing her own dishonesty. It wasn't nice, it wasn't pretty, but it had to be done. I've been floating out here in the cosmos ever since. 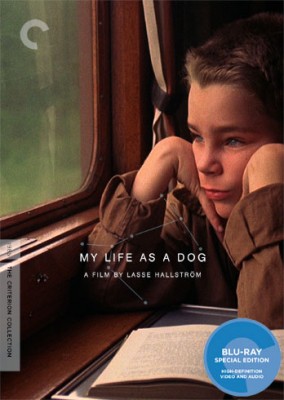 Video:
My Life is a Dog was shot at 1.67:1, and the new MPEG-4 AVC/1080p high-def transfer excellently captures the look of this 1985 film without making it overly slick or striking. The image has natural colors and good surface texture with a strong level of detail. There are some scenes that look softer than others, and at least one instance of a line down the screen, but these appear to just be flaws within the image itself and not with the transfer. A very fine grain adds seasoning to the picture, maintaining the integrity of Lasse Hallström's original film stock.

Sound:
The authentic Swedish soundtrack is presented as an LPCM 1.0 audio track and sounds wonderful. Though only mono, the soundscape is rich and pleasingly rendered. Dialogue is clear, the music has nice tones, and the sound effects are given the appropriate volume heft, light or soft, depending on what is required.

The subtitle translation is very good, with sharp letters and an easy reading pace.

Extras:
The Blu-Ray edition of My Life as a Dog repeats the same extras as the 2003 DVD version from Criterion, depsite a brand new art design. The enclosed booklet has the essay by Kurt Vonnegut praising the film, as well as a critical assessment from Michael Atkinson, photos, credits, and chapter listings. The new cover and interior look is an improvment; much warmer and expressive.

Lasse Hallström is featured in an 18-minute video interview discussing his career, and the novel that inspired the movie. There is also a theatrical trailer included. 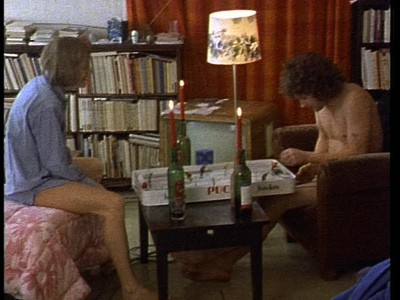 The most substantial bonus feature is one of Lasse Hallström's early short films made for television, and it also wrestles with the theme of honesty and how one presents oneself. In Shall We Go to My or Your Place or Each Go Home Alone? (1973), three friends go out to a nightclub for an evening of drinking and carousing. Each presents himself as a certain person when he is on the prowl, and when they get to their destination with the ladies they meet, they all have to then figure out how to close the deal once the façade has started to fade. It's no surprise, then, that the one couple who behaved with absolute honesty makes the only real connection; the other guys only pretended to be interested in what their dates had to say, and so have no real way to communicate with them when the lights have come on and the music has died. One of them manages to get laid, but then has to figure out an exit strategy; the other sleeps on his own floor, exiled in his own home.

Of course, given the elliptical and repetitive nature of most lives, Shall We Go ends where it all began.

In this younger effort, Hallström uses a much looser style, with improvisational acting and a more intimate camera. His shots are mostly tight, as closed in on the faces of his actors as the small apartments they inhabit also box them in. It makes their disconnected way of living seem claustrophobic. There is no way out as long as they cling to these unhealthy constructs. This is modern ennui.

FINAL THOUGHTS:
Highly Recommended. Lasse Hallström's quirky Swedish coming-of-age story is neither diminished by time nor multiple viewings. Despite My Life as a Dog's out-of-the-way setting, the director captures the universal experience of growing up and also some extremely fine performances from talented young actors. Seeing it again on Blu-Ray was as fulfilling an experience as expected, with Criterion doing their usual fine job of updating their older disc to fit the current standards. 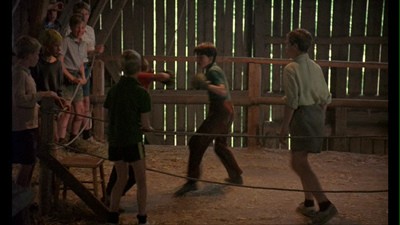