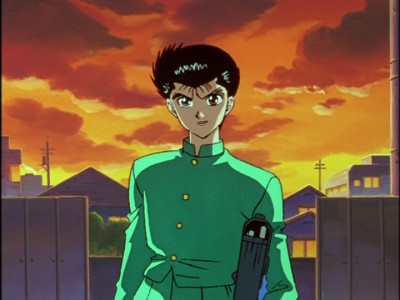 Yu Yu Hakusho continues to tell the story of a Spirit Detective named Yusuke Urameshi and his quest to destroy evil and bring peace to humankind with his friends Kuwabara, Hiei, Koenma, Botan, and Kurama.  The second season concluded with the Dark Tournament saga still ongoing. Season three picks up where the last set left off and concludes these Dark Tournament episodes while introducing another new saga: the Chapter Black Saga.

The Dark Tournament saga was sometimes frustrating because of the ongoing element of having one seemingly endless battle sequence after another at times. There were several episodes that seemed like "filler" material where the content was just a means to stretch the storytelling. While some of these episodes were truly fantastic for the fight sequences, the story and character-arc building also seemed to suffer somewhat - especially during the first half of the second season. Things began to pick up dramatically during the second half of season two and it is with much satisfaction that the third season begins with an energetic blast of excitement that seems almost impossible to let go of for the remainder of episodes on this third release. The tournament itself lasts for ten more episodes in Season 3 and the final battle between Yusuke and Toguro takes the center stage. The interesting thing about these conclusive moments in the tournament is how the battle sequences themselves don't last as long as some of the other tournament fights. This surprises and is a positive change of pace that allows for more thoroughly satisfying episodes that are capable of bringing the heightened emotion, tension, and action necessary to keep viewers glued to their seats with anticipation of the grand finale. 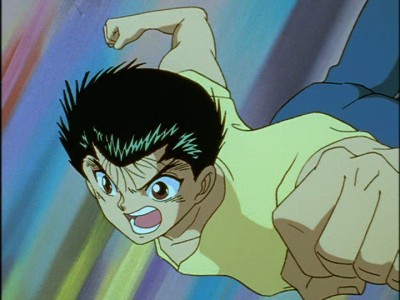 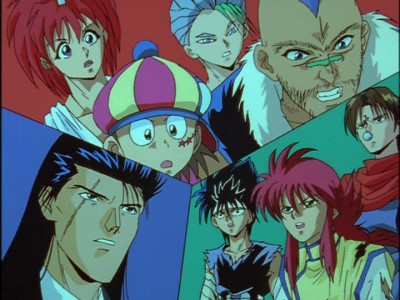 Out With a Bang (Episode 65) truly manages to wrap things up in a way that fans won't feel disappointed in the overall tournament arc. The animation, direction, and script seem quite impressive and it seems as though the entire creative team felt determined to see to it that the ending was well-made. Unfortunately, the episode following the conclusion plays out like an underdeveloped epilogue. Toguro's Wish (Episode 66) is a generally well-written episode, and it brings calm before another storm starts to slowly begin in the following saga. Despite the epilogue being generally satisfying though, the animation seemed dramatically inferior to everything seen on the series previously. Some characters almost seemed to be drawn from different animator's altogether,  many sequences felt like rough-drafts and not like a finished scene, and the concluding act brings back a beloved character thought lost forever in a way that offers no explanation to fans and is disappointing exactly because of the lack of explanation. Fans are sure to appreciate the characters return but not the lackluster way in which the story brings that character back. Was the budget limited for the episode? Were the animators under a time crunch? It's unclear, but what is clear is that the show seemed to lose some of its incredible focus for a short time.

The first few episodes of the Chapter Black saga seem somewhat weak in the animation department. Story-wise, it was a blast to have the characters return to a setting that is open to further explorations in a way that the more rigid tournament setting never fully allowed. The humor is brought back to the series as an important focus and some of the episodes rank among the most humorous in the entire series overall. It doesn't take the animators too long to jump back into a nice groove of excellent quality and the series is unquestionably back to an incredible level of high-quality entertainment. Around episode sixty-nine, "The Power of Taboo", each element seems to be in perfect harmony and the series feels miles away from the dip in quality felt for a few episodes. Thus begins one of the best runs of episodes in the entire show. The Chapter Black saga is much more varied storytelling-wise and there are more scenarios and environments for the characters to exist within.

Unlike Season 2 (where several filler episodes slowed down the flow of the story) the only episode on this entire set to feel that way is episode eighty, Moving Target, where Yusuke seems to have to avoid being gunned down and nothing particularly memorable occurs. It means that twenty-seven of the twenty-eight episodes are exciting, well-written, and are sure to please most of the audience. That's an impressive number of memorable episodes contained within the Season 3 release. 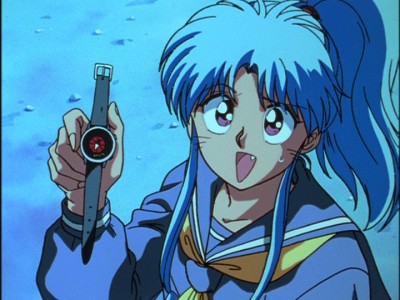 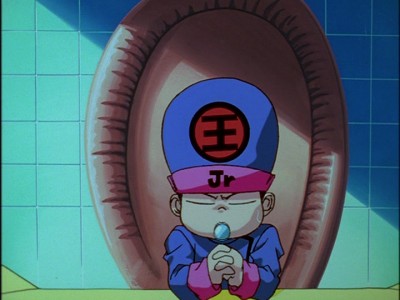 The Chapter Black Saga introduces a new villain who is perhaps the most intimidating one yet. Koenma (aka Jr.) doesn't want to let everyone know about their newest opponent, who was previously the Spirit Detective working to save humankind prior to Yusuke. It was a sad day when the former hero stepped down and went into ominous seclusion. Now everyone is faced with the news of the former hero's return and his goal to destroy all humans, who he believes deserve to be judged for their sins (as it is explained it in the show). The stakes on Yu Yu Hakusho are raised to new heights and the heroes must face even greater challenges than ever before.

The addition of a few new characters manages to keep things interesting while the new foe proves to be a challenge for Yusuke and his friends. Kuwabara loses his abilities for a short time and he will have to gain those back and perhaps receive some form of spirit upgrade. Kurama must deal with the consequences of an important decision towards the end of the season. Hiei must decide what it is he believes in more: his own self and previous desires or the strength of the team, friendship, and the importance of humanity. You'd think it'd be an easy answer...

Yusuke remains the captivating hero of the show who continues to gain strengths, abilities, and who remains a source of constant compassion for his team-mates, friends, and others. With a new series opening animation (though the same lovable song) Yu Yu Hakusho arrives at one of its best story arcs in Season 3, concludes a long-running one successfully, and has more character moments and humor than the former season. The conclusion to Season 3 is intense, well-paced, and will leave viewers wanting to see what happens next as soon as it ends. 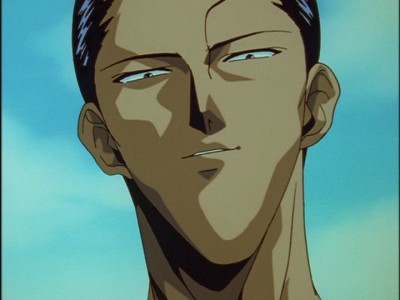 Yu Yu Hakusho: Season 3 has been released on Blu-ray with an incredibly gorgeous AVC encoded High Definition image that uses the same restored frame-by-frame masters used on the Japanese editions which were previously released on Blu-ray. Color saturation is the biggest improvement and the series looks remarkable for a show of its age. This traditional style anime is stunning in High Definition most of the time. There are random moments that are somewhat softer than usual on this release -- somewhat surprisingly. Yet it is difficult to determine whether or not it's due to the source or the encodings. These moments are rare and shouldn't detract from the overall experience. Yu Yu Hakusho looks remarkably clean, sharp, and impressive for the bulk of the presentation. A few moments of minor dirt on the prints or some random soft shots do not dramatically alter the high quality presentation or the experience.

The artwork on this release indicates that the release is Region A/B compatible, which means that overseas fans should be able to import and enjoy the series in High Definition as well.

The images featured in this review are from the Season Three DVD release and do not represent the High Definition Season Three Blu-ray picture quality.

There are two audio options for Yu Yu Hakusho: Season 3 on Blu-ray: Japanese 2.0 and English 5.1 (both options are presented in Dolby TrueHD). The English dub is amongst the best produced for any anime series with stellar voice-acting for each character. The original Japanese dub is impressive as well but many fans will probably want to actually experience the English version. Either option provides an impressive aural experience, although the 5.1 sound-mix is the better of the two choices with better dynamics and separation. Subtitles in English are provided for those who choose the Japanese dub. 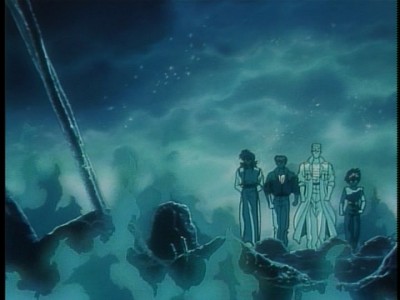 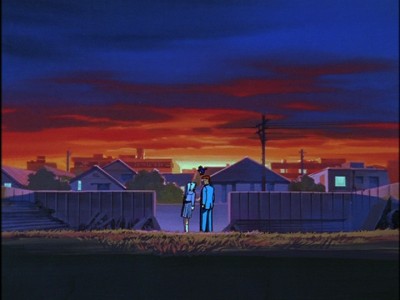 The only extras included on this release are clean opening/ending credits for the songs and animation featured in this season. Funimation has also provided some trailers for recent and upcoming releases. 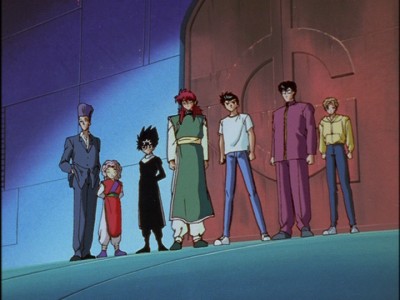 Yu Yu Hakusho: Season 3 has received a wonderful Anime Classics Blu-ray release from Funimation Entertainment. The series has improved since the second season with a good conclusion to the Dark Tournament Saga, and the Chapter Black Saga is shaping up to be one of the best run of episodes yet with almost consistently great storytelling and intrigue. The Blu-ray PQ/AQ is amazing for Yu Yu Hakusho. Fans will certainly want to indulge in a purchase even if the original DVD season sets are already owned. Highly Recommended.