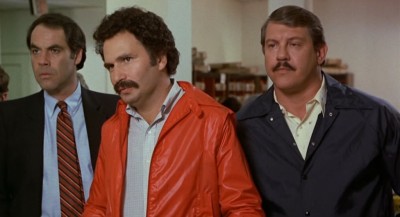 Imagine a tepid Marx Brothers comedy starring Gabe Kaplan, Alex Karras, and Robert Klein, and there's "Nobody's Perfekt," a pronounced attempt to bring jolly vaudevillian timing to the cynical year of 1981. Rarely funny but endearingly determined, the picture's success could only be gauged by personal taste. Those interested in the unconventional cast should have a blast, while others would be wise to steer clear of this funky Floridian farce.

Dibley (Gabe Kaplan) suffers from "recurring amnesia," which frustrates his ladylove, Carol (Susan Clark). Swaboda (Alex Karras) has a problem with "mental fixation," clinging to his dead mother's imaginary presence. Walter (Robert Klein) is a "double schizoid," with two additional personalities patterned after classic movie stars. Together the best friends try to make their way in Miami, bumbling around town on daily adventures. When Dibley's car is totaled after contact with an enormous pothole, he demands restitution from the city, hatching a plan with his buddies, and a reluctant Carol, to steal an Army howitzer, threatening to blow up the mayor's house if he refuses to pay. 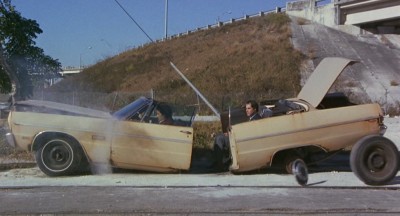 Directed by Peter Bonerz (a longtime filmmaker, but perhaps best known as Dr. Jerry Robinson on "The Bob Newhart Show"), "Nobody's Perfekt" is a brave attempt to refresh the moldy slapstick comedy genre, finding three disparate actors to recreate a manic sense of timing while sticking to a slightly more modern setting. Adapted by Tony Kenrick from his own novel, the script arranges a comedy contest of sorts for the actors, with each performer gifted a mental disorder to play with for the duration of the picture. Without much in the way of a plot, "Nobody's Perfekt" keeps to a routine of farcical interaction, where the three leads head out into the world, flustering strangers and trying the patience of loved ones while failing to contain their maladies. 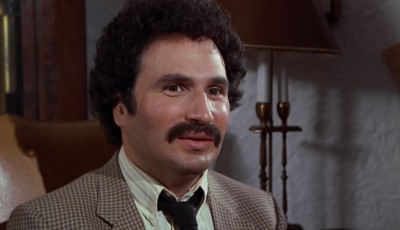 The script is truly a wide-open field for the actors, who are granted their every wish, with Klein even finding himself in drag to visualize one of his character's personalities. It's a broad picture built on finger-snap dialogue exchanges and deadpan reaction, while walking a larger path of destruction, with the men generally creating chaos wherever they go. The actors are comfortable in these roles, though Kaplan appears to be having to most fun playing a confused version of Groucho. Although with his expressionless face, it's difficult to read his mood. George steals the movie as the hapless girlfriend, the lone voice of reason who tags along for love, only to find herself front and center as the boys steal cars, weapons, and boats to retrieve what's owed to them. "Nobody's Perfekt" is a supremely silly movie, and while it rarely finds a funny bone, the effort is commendable, provided clean leadership from Bonerz, who obviously loves the expansive stupidity of it all.

And just how wacky is this movie? The title doesn't even fit the film print. Cue the rim shot. 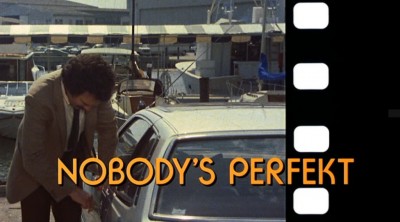 The anamorphic widescreen (1.85:1 aspect ratio) presentation is generally in good shape, with a few print defects spotted and some minor pixelation, while the image has a slight contrast boost at times. Colors are subdued but stable, picking up colorful costumes and Floridian locations, with exteriors keeping clean and bright. Skintones are natural, while black levels hold reasonably well.

The Dolby Digital 2.0 mix is a pleasing collection of verbal exchanges and slapstick antics, with the listening experience funneled into a frontal effort that sustains its 1981 origins. Dialogue is clean and easily understood, with crisp overlap and emotion. Scoring is large, but never overwhelming, heartily supporting the screen adventure with minimal distortion. There's no true dimension to the track, but the basics are articulated satisfactorily. 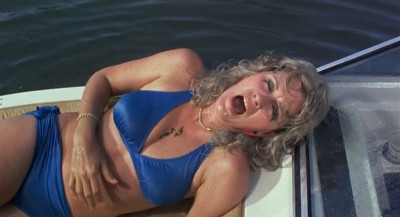 "Nobody's Perfekt" accelerates for the final act, introducing the efforts of a criminal team (led by Alex Rocco) who've planned their bank job to coincide with the firing of the howitzer. This leads to goons, car chases, and further tomfoolery, stretching the mischief past its expiration date. While the film is not without its charms, it's rarely uproarious, with the last 30 minutes a cruel reminder that this type of farce should be played a quickly as possible. A judicious editor is far more valuable than any perfect punchline to a production like this.