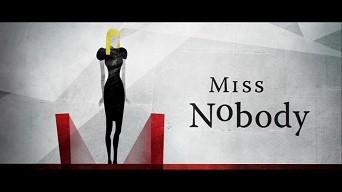 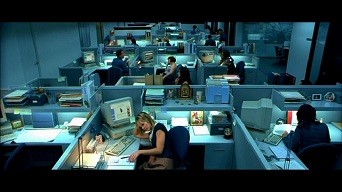 Miss Nobody, recently released on DVD by Inception Media Group, is one of those films that you leave wishing it were better than it actually was.

I've sat here for a few minutes wondering how to begin this review for DVD Talk - and that first sentence is the best I can come up with. Miss Nobody is a strange cinematic concoction: a light-hearted dark comedy about an insecure secretary (er, I mean, "administrative assistant") who discovers the path to her success up the corporate ladder - quite accidently on a real ladder at first - is murder. Think Rachel McAdams' story in Morning Glory being told by the Crypt Keeper in Tales from the Crypt. I really appreciated this movie's quirky approach, established by an energetic animated credits sequence, as well as its surprisingly strong cast and willingness to go into realms seldom touched by humorists (jokes about Alzheimer's??). However, the parts don't all come together as a whole - and what starts out as a freshly demented comedy with just a sprinkle or two of macabre horror ends up a fairly routine runaround that isn't quite as clever as it sets out to be.

Still, I think Miss Nobody is worth watching - and I'm recommending the movie despite my own mixed response to it. Perhaps the strongest quality of T. Abram Cox's film is its cast. Leslie Bibb (The Midnight Meat Train and the Iron Man films) is pretty good as the mousy Sarah Jane, the film's protagonist. Bibb plays "awkward" well, though with enough energy and finesse to thoroughly believe that her character would still catch the eyes of the businessmen she works for. Renee Zellweger would have played this type of role a dozen years ago. Bibb is supported by a surprisingly rich and varied cast, with both A-listers and recognizable character actors popping up throughout. Amongst them are Kathy Baker (Cider House Rules) as Sarah Jane's off-her-rocker mother, Vivica A Fox (Quentin Tarantino's Kill Bill) as a corporate rival, and Brandon Routh (Superman Returns) as Sarah Jane's womanizing superior.

In addition to its cast, Miss Nobody does offer an energetic plot. The script by Douglas Steinberg quickly but satisfactorily sets up Sarah Jane's world: her childhood, her home life, her sole work friend, and her dreams and aspirations. Bibb's voiceovers capture the candid earnestness of this character well, important since the audience is expected to "root" for Sarah Jane as she spirals down morally. And the movie gets to its main focus - the murders - with a wildly comical accidental spearing via an ill-placed umbrella. I won't spoil the plot too much more here - but let's just say that once Sarah Jane gets going, things spin out of control.

Allow me to come back to the first sentence of this review. Miss Nobody starts out promisingly - and it is entertaining throughout. However, it also dives into the gimmick well a few times too often. This is one of those films, for example, where the protagonist is allowed to break the fourth wall and talk directly to the audience. This works better in brief moments - like in an old Woody Allen movie - than it does for the extended in-the-middle-of-a-scene-with-other-characters-who-don't-notice moments here. And while I appreciate the EC Comics twisted humor vibe to the murders, there are a few too many of them, including some Sarah Jane imagines, and the effect begins to lose its appeal midway through the film.

In sum, Miss Nobody is quirky and offbeat enough to recommend - but those are the very same aspects that are almost the movie's undoing. 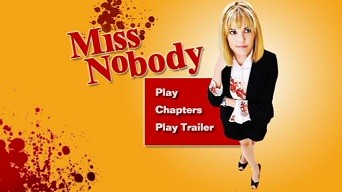 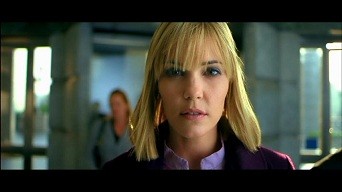 Inception Media gives Miss Nobody an anamorphic widescreen presentation with a 2.35:1 aspect ratio. The image quality itself seemed sharp with strong colors and detail.

The lone audio track is a Dolby Digital 5.1 affair that never really rises above stereo in terms of a dynamic mix. I guess that's why the back cover art reads "5.1 Digital/Stereo." Still, dialogue is always clear, which is all that really matters.

The only extra is a trailer for Miss Nobody itself.

Miss Nobody has a great cast, headlined by Leslie Bibb, that cinephiles will appreciate. It tells the story of a secretary who climbs the corporate ladder by murdering her competition in outlandish ways with quirky dark humor that Tales from the Crypt fans may enjoy. However, the film suffers from a few too many gimmicks - and leaves one thinking that this could have been masterful given another script rewrite and less overt contrivances. Recommended, nonetheless.