S'more Entertainment // Unrated // June 14, 2011
List Price: $29.98 [Buy now and save at Amazon]
Review by Stuart Galbraith IV | posted July 3, 2011 | E-mail the Author
You wouldn't think a DVD with a title like Celebrity Bowling would be almost hypnotically entertaining - until, that is, you look at the bizarre/inspired/goofy parings of talent. I mean, Dick Martin & Billy Barty vs. John Schuck & Michael Ansara? How about Donald O'Connor & Rosemary Clooney vs. Rose Marie & Morey Amsterdam? Roy Rogers & Adam West vs. Kent McCord & Gary Collins?

The jumble of singers and songwriters, former and then-current TV stars and old-time character actors, all "bowling like millions of ordinary Americans do every week," makes Celebrity Bowling genuinely fascinating and fun viewing. While a few of the guests, Michael Douglas for one, seem mildly embarrassed to be there, most of the stars and barely-stars seem to be enjoying themselves immensely while a few clearly exhibit a competitive spirit that's occasionally revealing.

Another gem of a release from S'More Entertainment, a label with an infectious affection for such outré obscurities, Celebrity Bowling is a three disc set with 15 half-hour episodes. I hope it sells well; I'd love to see a Volume 2. 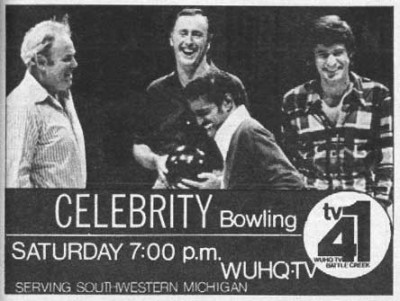 The series ran in syndication from 1971-78 and was leisurely hosted by Jed Allan (Days of Our Lives*), paired with various professional bowlers there to offer expert commentary. Two pairs of celebrities compete on behalf of audience members under the "best ball" system: both members of each team would try to get a strike. If that doesn't happen, the player that rolled the worse shot attempts a spare on the easier of the two lanes. If that sounds confusing that's because it is. Throughout the run of Celebrity Bowling the players, Jed Allan, and even the pro-bowler commentator frequently get confused about who's supposed to be bowling where. Otherwise, a standard 10-frame game is played, though usually because of time constraints a frame or two is lost during the halftime commercial break.

Part of the fun of Celebrity Bowling is discovering who bowls well, who bowls lousy, who takes the game too seriously and who not at all. My favorite match-up pits Roy Rogers & Robert Culp against Bob Newhart & Bobby Troup - three Roberts and a Roy. Newhart and Troup, casually attired, chain-smoke their way through the game as if kicking back at the Playboy Mansion. Meanwhile, genial Roy Rogers, with ever-present smile, rolls strike-after-strike while Robert Culp starts out poorly and gets worse along the way - and clearly struggles to maintain his composure. At the end Newhart and Troup applaud the audience, Rogers smiles warmly some more, and Culp scowls at them with his arms defiantly folded. William Shatner and Tige Andrews aren't too hot either, and watching their reactions is pretty amusing as well. I wonder if Robert Conrad ever did the show?

A few celebrities are seriously competitive though most are relaxed and it's fun watch familiar actors like Don Adams, Ed Asner, Leslie Nielsen, and John Saxon simply "be themselves." Unsurprisingly, all hell breaks loose when Morey Amsterdam is on: the human joke machine is as animated as a pinball machine and by the 10th frame even Rose Marie is telling him to shut up and bowl.

Celebrity Bowling would probably have been even better had there been a bit less commentary by Allan and his color commentator and instead allowed the audience to listen in more as the celebrities chat among themselves, expressing pleasure and frustration as they toss off strikes and gutter balls.

There's little in the way of pre- and post-game chat but what there is can be interesting. Michael Ansara plugs his new movie, Mohammed - Messenger of God, for instance, but usually there's precious little time after 10 frames of confusing "best ball."

First, a word of caution: though the set is listed on the packaging as all-region, it's actually region 1 encoded, and not region-free.

Celebrity Bowling was shot on '70s era videotape and thus pretty dated visually, though perfectly watchable. Audio on the single-sided discs, Dolby Digital 2.0 English-only with no subtitle options, is reasonably good, considering, though the swinging hubs holding discs 1 and 2 in place is cheaply made and easily broken, as mine did in the mail. There are no Extra Features.

Loads more fun that you might expect from a show like this, Celebrity Bowling is one of year's most pleasurable guilty pleasures and Highly Recommended.

* Allan played Don Craig on the long-running soap opera from 1971 to 1985. According to Wikipedia, his character's departure was controversial: Don left to mail a letter and was never mentioned or heard from again. Allan, however, simply moved over to Santa Barbara and then General Hospital.