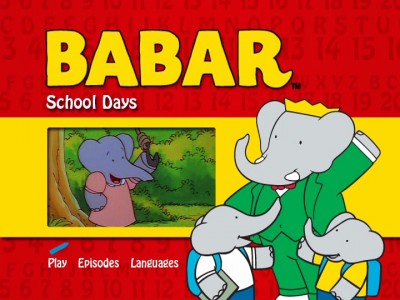 Babar is the King of the Elephants! The TV series Babar was based on the popular children's books by Jean and Laurent de Brunhoff and was created in 1989. These stories have been told over the course of six seasons that spanned from the original broadcast year of 1989 to 2000. Each story is an individual lesson or segment that can be watched separately without necessarily following the production sequence. These stories can all be viewed as lessons in life that share great thematic elements with young children in a way that can be understood and appreciated throughout life.

Babar is the central character in many respects (as the title of the program would seem to imply). Babar is the lovable king elephant with many years of wisdom to share with those who surround him (including his loving children). Babar married to the equally enchanting Celeste, who also provides guidance and love to their wonderful children and to the people of their peaceful kingdom. Pom, Flora, Alexander, and Isabelle are their four children who each have wonderful and uniquely spirited personalities. Madame is a wise, gentle, kind, and loving old lady who helped bring up Babar as a young elephant and she taught the elephant many of the important life lessons he grew to recognize as essential. Other supporting characters include the comical monkey Zephir, knowledgeable Cornelius, kingdom advisor Pompadour, and Rataxes, who leads the kingdom Rhinoland which frequently comes into some kind of minor conflict with Babar's kingdom (such as in resolving an issue of a pomegranate shortage because Rhinoland has all of the fruit). 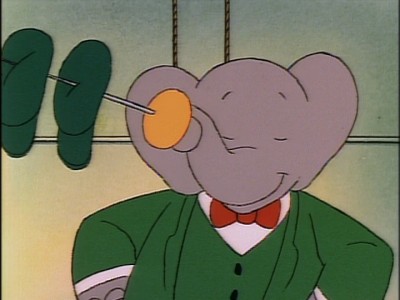 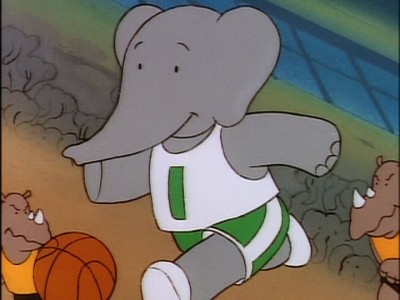 The series has a simple storytelling approach and yet it never addresses simple issues. The format of the scripts is delicately balanced so as to be educational for young audiences and at the same time both direct and entertaining. The themes addressed on this volume are a great way for viewers to become more familiar with the Babar educational approach. Some of the themes explored on the School Days volume include learning how to stand up to any school bullies that may not be respectful of the differences in others, how to work to be the best that we can be without worrying about impressions if we aren't perfect (in the episode example - even if we aren't experts at a sport, as long as one tries their best things should work out alright in the end), recognizing that it is generally better to apologize to someone who is a close friend than it is to hold a grudge, and to understand that it is better to stand up to peer pressure and for what you believe in than it is to participate in something that is not what you would otherwise do (in the episode, the idea presented is that Babar wants to make friends with others so much that he ends up spending time with a group of boys who have a club leader that is mean-spirited to a local dog - and who wants the rest of the club members to be equally mean to the dog in order to prove themselves "club worthy"). These valuable lessons in everyday issues facing many children (and adults) are important as well as meaningful for everyone to recognize.

Best Friends Forever volume include learning about how to be true to ourselves, how to cooperate with others when learning to recognize when there are group problems without particular blame on any one individual or friend, how to come to agreements, and both the importance of friendship and of helping others.

The animation is sweetly simplistic with a maturity in style that also brings forth an element of sophistication. That description's a good way to examine the carefully nuanced animation, which is constantly beautifully drawn, expertly animated in every possible way, and brought to life as only truly gifted animators can accomplish. The character designs are memorable; the backgrounds often limited, except when lush briefly displayed detailed settings come on screen and elevate the material.

Babar was a marvelous program for young audiences during the years it was on air as a new television program and it has remained a well-spirited story to share with others. It's one of those children's programs that can even be a good series for adults to watch as well.  It is so well made and provides so much educational value that it is no wonder that Babar is now referred to as The Classic Series (as the DVD release proudly proclaims over the title). Babar is a beloved children's program with worthwhile stories to share with viewers of all ages.

This DVD release contains a sampling of episodes from the series. The included episodes are School Days, Kings of the Castle, Every Basket Has a Silver Lining, and Peer Pressure. 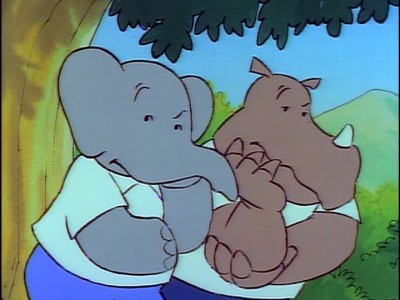 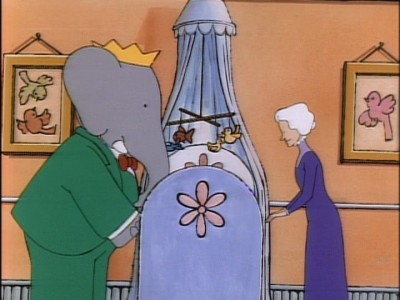 Babar is presented with a 1.33:1 full frame image that preserves the original broadcast aspect ratio. The DVD promotes the video as digitally restored and remastered but this series still seems to have shown some aging without an entirely dedicated restoration. Colors are somewhat muted and there are interlacing issues that can be a distraction. Inconsistency in image stability is also a minor issue. The overall PQ isn't terrible but nothing resembles a truly impressive presentation in this department and fans might consider this somewhat disappointing but still watchable.

Portions of this review are shared with the concurrently released and reviewed Babar volume Best Friends Forever which contains an additional four episodes of the series.

The only included extra is an 8 Page Babar themed coloring book (which is the same version featured in the concurrently released Best Friends Forever volume). 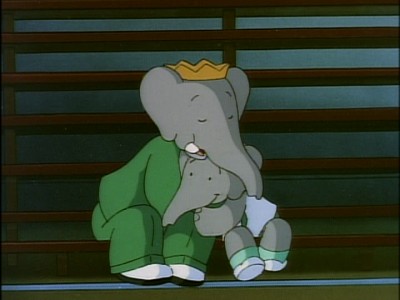 It is wonderful to have select episodes of Babar on DVD and hopefully new generations of viewers can enjoy in the series exuberant creativity and meaningful life lessons. While the PQ/AQ is merely average and the coloring book is only going to appeal to kids, this release would still make an excellent introduction to the series. It is also a proper nostalgic trip for viewers already familiar with the lovable Babar. Hopefully fans can anticipate seeing more Babar DVD volumes or season sets in the future.  Recommended.