Page One: Inside The New York Times 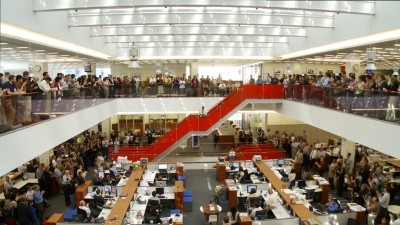 Any film endeavoring to survey the wreckage of the newspaper industry is sure to play like a eulogy, yet Andrew Rossi's "Page One: Inside the New York Times" stay remarkably composed. Granted access to the inner working of the world's most iconic newspaper, Rossi doesn't weep, he carefully observes the downward spiral, coming to the conclusion that perhaps there's no decline at all. Riveting and surprisingly communicative, "Page One" supplies a rich understanding of print journalism as it stands on a high-rise ledge, looking down while members of the online media implore it to jump for their entertainment.

"Page One" isn't consumed with providing an arc of performance for the New York Times. Instead, the picture scoops up the mood of the newsroom as critical moments of history pass by, observing writers and editors in motion as they plan their stories and headlines, generating a heated routine of research and inter-office conversation, a tight work ethic that's been a cornerstone of the company for over a century. Stories trickle in and emerge on the page the next day as hard news for the world to follow. It seems nothing can break the hold of the New York Times. 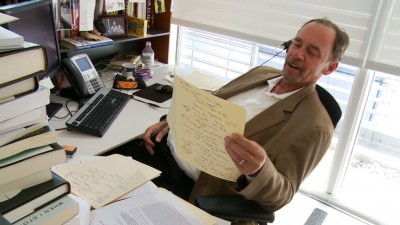 It turns out there's a spoiler in the distance and its name is online media. Your basic blogs, sites, and news aggregators have been chipping away at print media's circulation numbers for years now, with recent leaps in technology and availability forcing many of the nation's top newspapers to close, unable to keep up with the demand for free and instantaneous news. "Page One" goes beyond a mere day in the life of the New York Times to investigate the tensions in the newsroom, with personnel struggling to maintain their focus while the business begins to crumble, forcing these intelligent men and women to seek alternative ways to reach their audience while still maintaining the reputation of the company.

Rossi's access here is extraordinary, with a few journalists permitting entry into their fears and irritations, forced into battle against an unknown enemy that's no enemy at all. While we meet key individuals responsible for the daily production of the paper, the clear star of the show is writer David Carr, a wildly charismatic and defiant columnist who found his way to the gig after two violent bouts with chemical dependency that nearly destroyed him. The rascally Minnesotan welcomes Rossi's presence, willing to be filmed as he makes media and panel appearances, defending his employer with the precision of a samurai. We also watch Carr work, which is a hypnotic display of frustration and dogged professionalism, refusing to permit attacks from glib individuals out to disparage the paper. On the other side of the coin is Brian Stetler, a young, brash reporter dancing around social media technology to inform his writing, playing into the new frontier of journalism that's simply alien to the older generation. 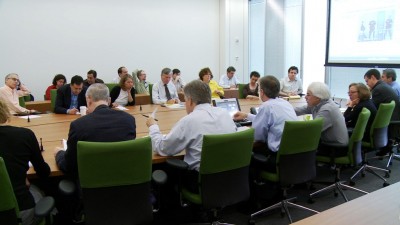 "Page One" doesn't allow the paper hero status, carefully introducing controversies that have led to a few crippling blows to their reputation. With word of WikiLeaks in the air during filming, Rossi uses the wild world of Julian Assange as a way to showcase the tentative bridge built between the worlds of print and online media. Exploring bankruptcies, paywalls, layoffs, and competition, "Page One" remains highly informative and shockingly human, studying a fracture within an industry kept alive by the journalists, who still look to share, question, and challenge while the bosses scramble to find ways to make money and build readership. The way Rossi gracefully arranges the evidence, it's easy to feel the hope and promise for the business of news. It might be wounded, but it's far from dead.