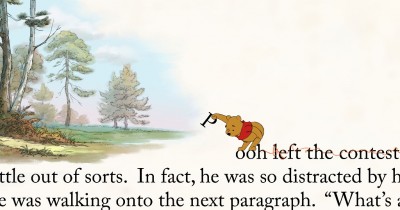 Simplicity reigns supreme in "Winnie the Pooh," which isn't a reimagining, reconstruction, or reevaluation of a classic character. Instead, it's just a breezy, endearing, humorous romp with everyone's favorite stuffed bear, going back to the basics of traditional animated feature filmmaking. Imagine that, an entire motion picture built around the innate charms and feisty personalities of its cast of characters, without the need for bathroom humor or story padding. This movie is downright huggable.

It seems there's a bit of a mystery developing deep in the heart of the Hundred Acre Wood. Having lost his tail, Eeyore (voiced by Bud Luckey) is looking for a replacement, with the likes of Winnie the Pooh (Jim Cummings), Tigger (also Jim Cummings), Rabbit (Tom Kenney), Owl (Craig Ferguson), Piglet (Travis Oates), Kanga (Kristen Anderson-Lopez), and Roo (Wyatt Dean Hall) eager to step up and claim a prize of honey for their winning suggestion. Also troubling the community is the disappearance of Christopher Robin (Jack Boulter), with Owl's mispronunciation of "back soon" instigating utter panic, leading the gang to fear a monster has stolen their dear friend. 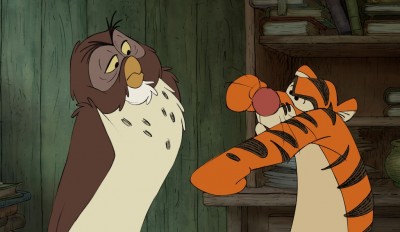 In an age of megablockubuster animated releases, it's a little bizarre to come across something as straightforward as "Winnie the Pooh," which doesn't have much in the way of fireworks to keep the average ADD kid glued to the screen. And thank heavens for that. Instead of 'roiding up Pooh for the summer movie season, Disney has sustained gentleness about the character and his world of mischief. Directors Stephen Anderson and Don Hall lead with playfulness, stirring up the Disneyfied version of A.A. Milne's timeless character with an episodic adventure that returns Pooh to the essentials, sending him off into a colorful canvas of neighbors, nature, and "hunny" hallucinations (the bear is always craving the golden stuff after all). It's a low-fi journey that avoids the battering rams of 3D, fart jokes, and aggressive CG-animation, insisting imagination time with appealing characters is more important than sensory overload. Amen.

The screenplay invests in a retro vibe of cartoon peace, leaving accelerated antics to Tigger and his bouncing madness. The stories collected here are more about character interplay, with Pooh and the community uniting to solve Eeyore's tail situation, soon off to set up traps for the beast they call "Backson," which eventually finds the entire crew trapped in a pit they've dug for their enemy. The unfussy scripting is sublime, permitting the characters moments to shine without halting the smooth flow of the narrative, often hitting only a few beats of frustration and comedy before skipping off to the next event. Assisting matters is narration from John Cleese, who comfortably guides the audience back into Pooh's corner, also lending a hand to the gang when they literally stray off the page, caught up in a swarm of letters. 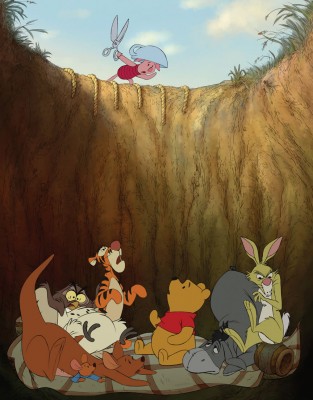 While minimalism is favored here, the animation is consistently surprising, creating comfort with vivid Hundred Acre Wood sights, but also breaking off into a few unexpected directions, including one musical number staged as chalkboard art, with Owl comically detailing the wrath of the Backson. Also amusing is a trippy sequence where Pooh's hunny shakes finally get the best of him, with the bear diving into a land of the sticky stuff. "Winnie the Pooh" finds additional merriment in the music department, with a handful of new songs helping out expositional needs, maintaining the picture's jubilant mood. Actress/singer Zooey Deschanel brings her own bubby take on the title song, while satisfying a few musical needs with her soothing voice.

"Winnie the Pooh" is short (65 minutes), which comes to be a blessing. Instead of laboring over these cartoon incidents with an eye on the clock, the production hits the basics, nails the laughs and charm, and bows out gracefully. It knows when to quit. However, it's hard to say goodbye to Pooh and his pals, especially when this latest cinematic adventure is so utterly divine.