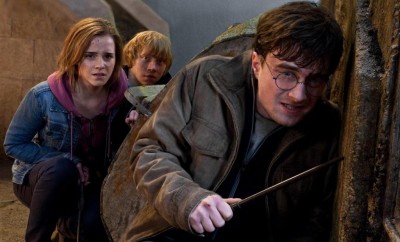 What began as the story of a boy's wondrous introduction into a limitless world of magic ends in an epic display of war, death, and desire for peace. "Harry Potter and the Deathly Hallows: Part 2" is the final chapter in the longstanding fantasy series and it's a fitting conclusion to the legend, marrying the extensive exposition of "Part 1" with an intermittently furious finale that satisfies and rouses in all the proper ways. I'm certain few will want to say goodbye to the admired franchise, but the production has secured a superb finish that's elegant and carries significant emotional heft.

Now in possession of the Elder Wand, Voldemort (Ralph Fiennes) is preparing his dark forces for battle, looking to assume control of Hogwarts and kill his nemesis, Harry Potter (Daniel Radcliffe). Standing up to the threat, Harry, Ron (Rupert Grint), and Hermione (Emma Watson) set out to destroy the remaining Horcruxes, infiltrating Gringotts Bank and Hogwarts to uncover these critical pieces of Voldemort's demonic soul. As war is declared, Hogwarts becomes a battleground, with good vs. evil tearing up the property, taking critical casualties on both sides. For Harry, his journey requires an immense leap of faith and power to even approach Voldemort's wrath, requiring guidance from loved ones as he steps up to confront his mortal enemy. 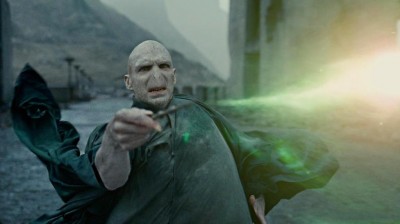 As last holiday's "Part 1" established, "Deathly Hallows" has been meticulously adapted for the big screen, with producers permitting the full breadth of the book to assume two motion pictures. The first film was a tale of investigation and acceptance of destiny, following Harry and the gang as they discovered a crucial weakness within Voldemort while maturing into adulthood as the wizarding doomsday arrived. "Part 2" picks up exactly where the last picture left off, only now the players are firmly positioned, demanding the long-anticipated launch of the end game (gifted surplus proportions via an IMAX 3D upgrade).

"Part 2" is only partially a war movie. Yes, Hogwarts takes a quite a serious beating, with the whimsical school reduced to rubble as Voldemort's armies commence their siege with help from trolls and spiders, storming the grounds on the hunt to slaughter as many hapless students as possible. It's not an overtly violent movie, but the life and death stakes are raised considerably, with a few disquieting casualties along the way. Nevertheless, the Battle of Hogwarts is only one facet of the "Part 2" tale, providing some desirable action and suspense while the story continues down a path of exploration, sending the boy wizard to metaphysical spaces as he marches to his fate. 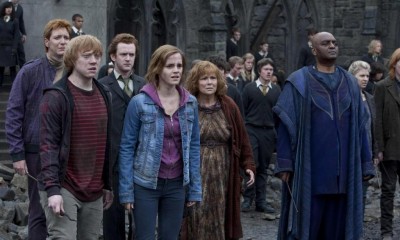 Director David Yates once again shows remarkable creativity and bravery with this material. "Part 2" is a dark movie, yet it keeps a steady pace and preserves various thrills. With much of the storytelling burden placed on the previous picture, the second half is freed up to raise a little hell, paying off the swell of seven films with a sweeping cinematic stampede. Granted, this series isn't the most hard-charging action spectacle around, but the wizards do remarkable damage with their backs against the wall, like an asthmatic kid stepping up to the plate and hitting a home run. The blockbuster beats are a little alien to a series of unrelenting explanation, but Yates offers a firm hold, interested more in the discomfort of violence than a fist-pumping routine.

The nuances of the "Part 2" plot are equally cared for, observing Harry inhale the full extent of his cursed life, surrounded by unlikely protectors and unnerving secrets. The Horcrux business steps aside quickly, with the second film focused on Harry and the abyss of death at his feet. "Part 2" takes some fairly odd turns that return Dumbledore (Michael Gambon) to the fold, challenging viewers by making the final showdown with Voldemort more complicated than simple wand fu. Though "Part 2" is dedicated to visceral delights, some cerebral business sneaks into view, gracefully examined by Yates and his stellar crew. 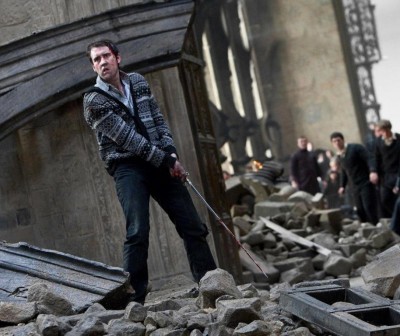 Another miracle of the film is how well it keeps up with the characters, using the Battle of Hogwarts to greet old faces and introduce a few new troublemakers (Kelly Macdonald makes a memorable appearance as the ghostly Helena Ravenclaw). Extended moments with the community is impossible, yet Yates does an admirable job juggling the faces and places, even finding time to generate a new warrior in Neville Longbottom (Matthew Lewis), who takes a far more courageous position in the picture, gallantly protecting Hogwarts from harm. Performances from the primary cast members are exemplary, with special sauce provided by Alan Rickman as the tortured Severus Snape and Fiennes, who digs into the ick of Voldemort with both hands here.

Without leaning too far into spoiler territory, I will share this: as much as "Part 2" is about finality and combat, it also concerns soulful balance, offering a lovely epilogue that gently reinforces the cycle of life Harry was inadvertently fighting for. It's a satisfying, if all too brief farewell.

It's hard to believe we've had Harry Potter on screens for a decade now, with each feature finding its shape and purpose through an unbelievable level of artistic surprise. Rarely has a film series enjoyed such success and consistency, creating an epic arc of maturation, heroism, and friendship to savor for decades to come. "Harry Potter and the Deathly Hallows: Part 2" is the end of an extensive journey, hauling a weight of finality that's bittersweet. Still, there's much to celebrate here, with the picture a stirring, magnificent conclusion to a marathon wizarding odyssey.